I’ve been asked a few times over the past couple months how I colour my soaps. One of my biggest pet peeves is seeing a store like Lush or The Body Shop branding itself as “natural”, and seeing how many artificial, petroleum-derived colourants they use in their products while still riding that “natural” marketing train. 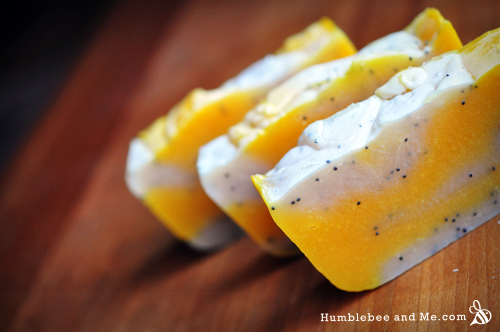 I tend to use more natural colourants, ranging from naturally coloured oils to iron oxides. The saponification process is a bit of a wild card, in that you never know how a coloured ingredient will be effected afterwards. Apparently rosehip extract, which is bright pink, turns black turning saponification. Whoops, haha. Anyhow, here’s how I colour my soaps, without the use of any artificial dyes. 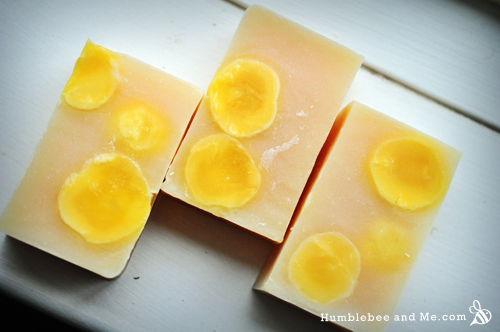 I used buriti oil to get the brightly coloured polka dots. 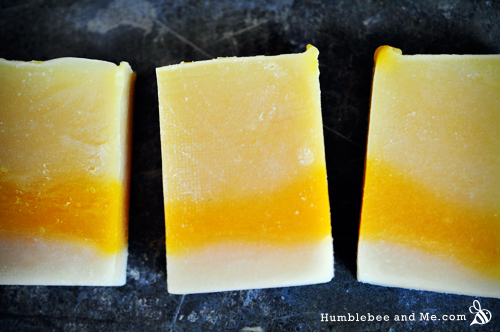 I used different amounts of buriti oil to get the yellow on top and the orange in the middle.

Buriti Oil
This oil is a bright, deep orange naturally. I use it in varying amounts to get anything from a nice, mellow yellow colour, to a bright, bright orange. You don’t need much of it to achieve great colour, so you can add it after trace without worrying about your superfat percentage too much. Take care not to stain your clothes with it, though! I find it holds up fairly well against fading, though it will fade quite noticeably after a year or so. 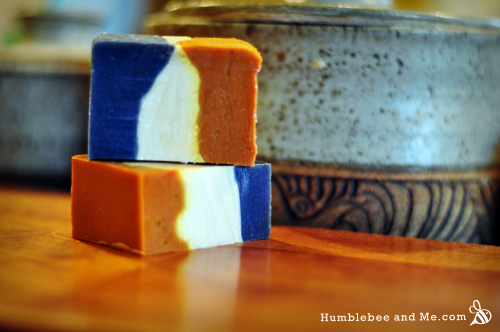 I used oxides to get these deep colours, but this soap really bleeds colour when you use it. You wouldn’t want to use it to wash laundry or you’d get orange and blue stains on everything. 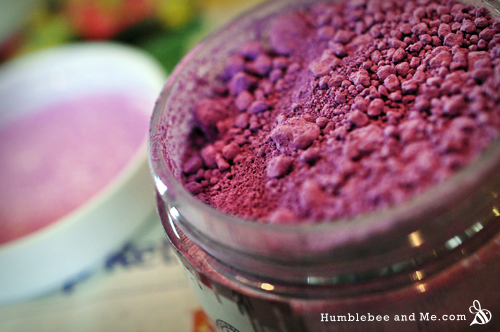 Purple oxide—it’s pretty hard to find this colour in nature, so this is a nice and easy workaround. 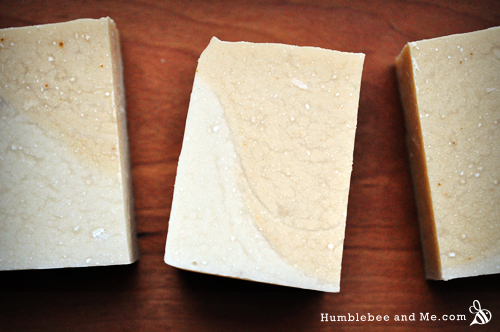 See that funny mottled/oily looking effect? That’s from using too much oxide.

Oxides
You don’t need much at all to get a nice, pastel tint in your soaps. The bonus with oxides is that you can achieve colours, like lavender or bright blue, that can be quite difficult to achieve with anything else. The negative is that you can really only get fairly soft colours—I’ve found that if you add too much it gives the soap an odd, almost mottled look, known as glycerin rivers. Bars coloured with lots of iron oxide can also leave coloured soap scum streaks on everything.

Note: Oxides fall into a strange sort-of-limbo as far as the term “natural” goes. The compounds for iron oxides and blue ultramarine do exist naturally as rust (or semi-precious stones in the case of ultramarine), but are generally contaminated with heavy metals or are very expensive, and as such the ones we purchase are synthesized. 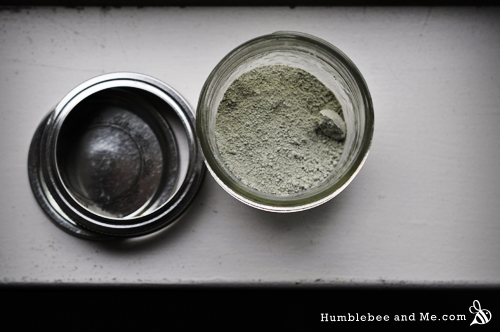 Clays
This is probably one of my favourite ways to colour soap! I always add clay to my soaps anyways, so it’s like multi-tasking. French Green gives a beautiful green tint, Rhassoul adds brown, and so and and so forth (it’s pretty obvious which clays add which colours, and I’ve found they don’t change during saponification). 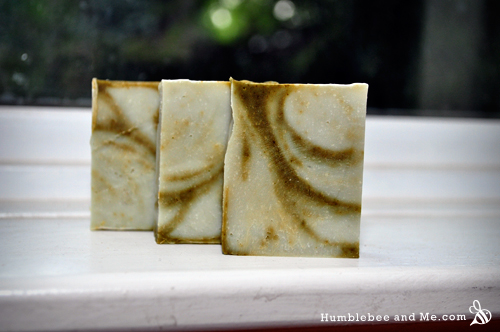 I used French Green clay to get the lighter green colour, and spirulina for the darker green swirls. 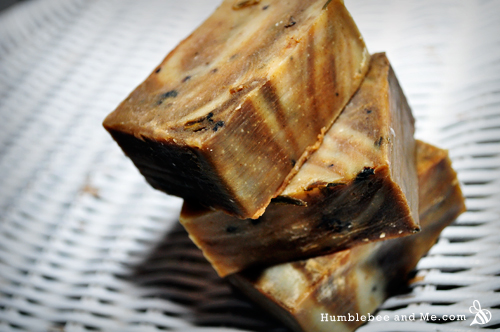 Seaweed powder is what gives this soap its dark brown swirls (and a very characteristic seaweed smell).

Spirulina & Seaweed Powder
These green powders derived from seaweed/cynobacteria add great brown/green colour, though it is prone to fading over time as the bars age. 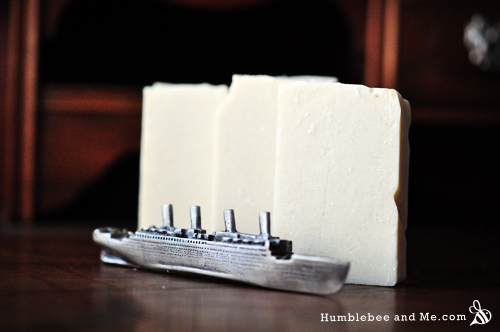 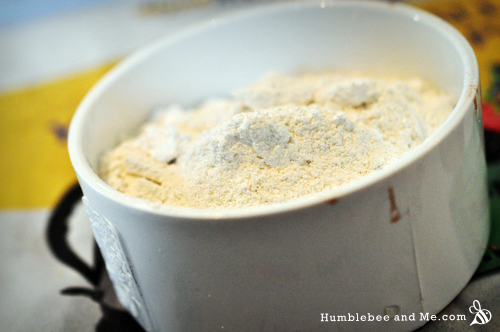 Titanium dioxide that’s been blended with some white [sv slug="kaolin"], for a nice, white soap.

Titanium Dioxide
Great for making soap white (or whiter), but not great for much else. For soap making either the oil soluble or water soluble version will work, just be sure to use an immersion blender to break up any clumps so you don’t have white blobs of powder in your final bars. 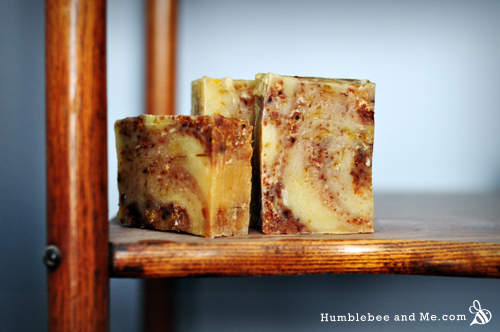 I used puréed cranberries to get the red streaks, but they were always chunky, like I’d stirred jam into the soap. 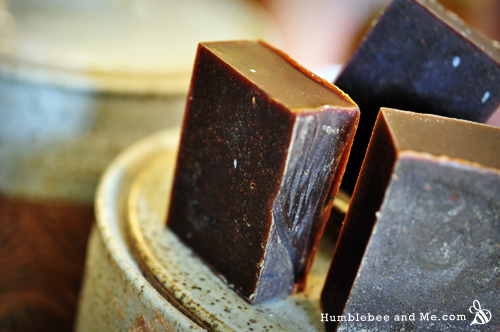 Blackstrap molasses gives a beautiful dark brown colour. I only use it for shampoos for people with dark hair as it does create a lot of brown run off.

Food
I’ve had varying levels of success with this one. Blackstrap molasses works really well to get a very dark brown colour, but you have to be careful not to use too much or the sugar content can cause the batch to curdle (keep the temperature low, too). I’ve also tried simmering brightly coloured fruits and vegetables, like cranberries and beets, and then puréeing and reducing the mixtures before stirring them into the soap. That has worked, more or less, but I probably wouldn’t do it again now that I can add oxides instead, especially since the food colouring options are more prone to shifting colour during saponification (usually to something brown) and fading over time as the bars age. 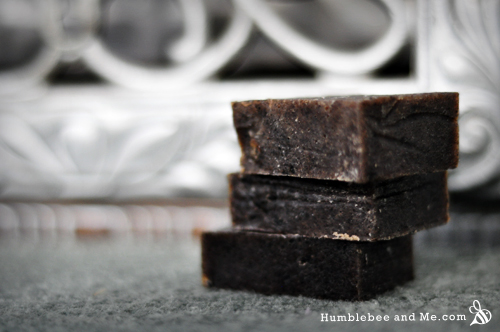 I used brewed coffee instead of water as the base for the soap, and then added coffee grounds. Go easy on the coffee grounds, I went overboard and this was a very scratchy batch of soap! 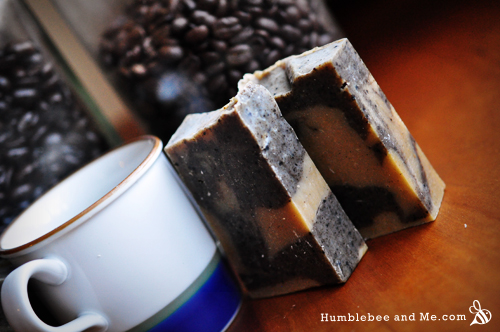 I used a mixture of instant coffee and brown rhassoul clay to get the dark swirls. 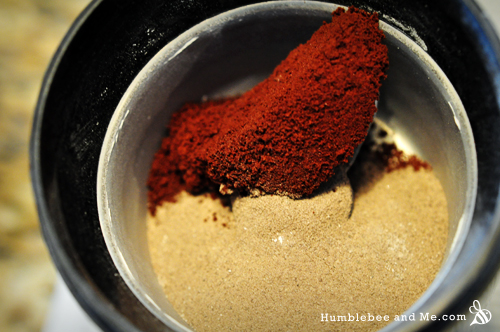 The instant coffee and clay for the Café Latte bars, before blending together. As you can see, the colour darkened quite a bit as it saponified.

Coffee
This works well for getting a nice brown colour, though, sadly the scent doesn’t really come through. You can use instant coffee powder or use brewed cold coffee instead of water to add the lye to. 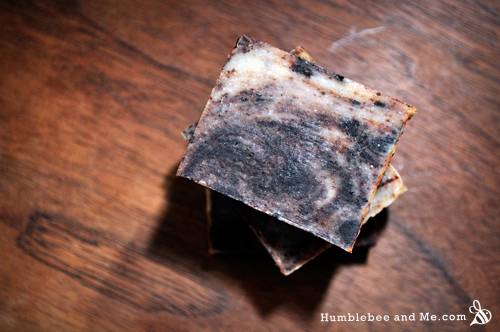 Ground cinnamon makes the dark swirls here. Since cinnamon increases circulation, this soap was both exfoliating and quite warming—I tended to avoid using it on my face because it almost bordered on irritating.

Spices
Spices are a great way to add colour, exfoliation, and scent at the same time! I’ve had good success adding swirls of ground cinnamon to soap. You could also experiment with other spices like paprika—just stay away from things like cayenne pepper, which will definitely wake you up during your morning shower, but not very nicely!

And that’s it! With these options you should be able to easily (and naturally) create the rainbow. There are limits, of course—you won’t be able to create super dark colours without bleeding, or neon shades, but I’ve found more than enough variety here to keep me more than happy with the possibilities!