I had so much fun making this pretty soap. Coloured with powdered indigo and some pretty purple and green micas, I wanted to channel Aurora Borealis, or the Northern Lights—and the winter solstice seemed like a great time for it. I had a lot of fun thinking through how to create a soap that would channel such an incredible natural wonder, and while I don’t think I quite nailed it, I do think these pretty bars are a fitting tribute.

I’ve only been lucky enough to see the Northern Lights, or Aurora Borealis, once. I’ve signed up for email alerts, but I usually find them in my inbox the following morning, well after the show has ended. The one time I did see them I was out camping, and as I headed back to my tent for the night somebody caught my attention and told me to look up. When I did I saw the most surreal, stunning mirage of misty green ribbons dancing in the sky. It was beyond beautiful, and one of these days I really need to get my act together and head out to the mountains to see them (and maybe even photograph them) properly. 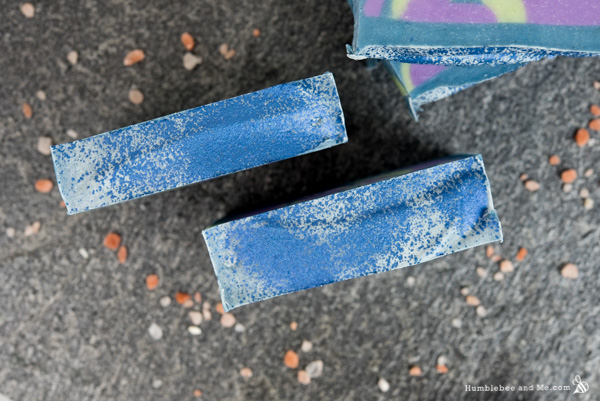 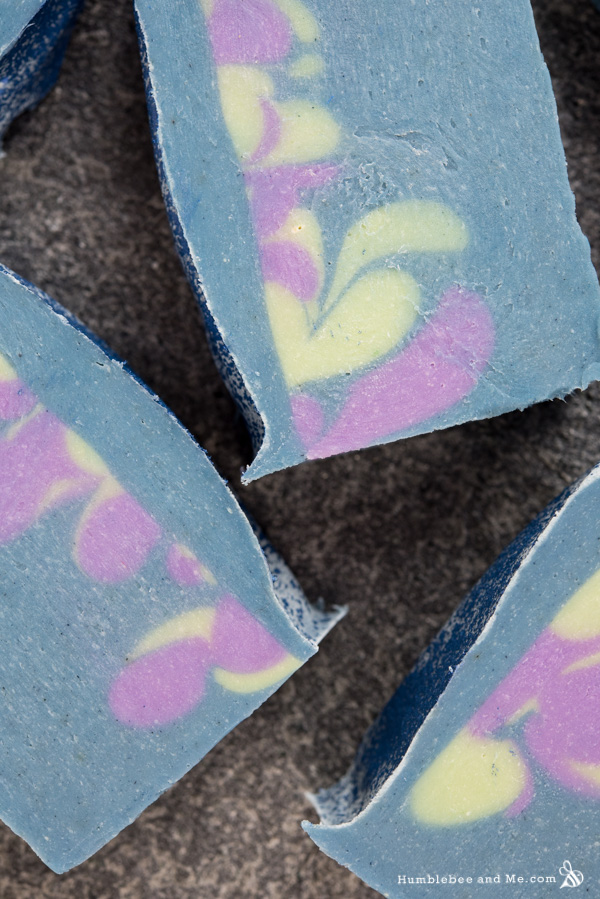 The bulk of this soap batter is a deep blue, coloured with indigo (though you can definitely use a dark blue mica if you don’t have indigo). You’ll want to strike a balance between making this batter a deep, dark blue and creating a soap that isn’t so pigmented that it destroys all your towels, so stop as soon as the blue seems rich and lovely—well before it’s actually night-sky kinda dark! 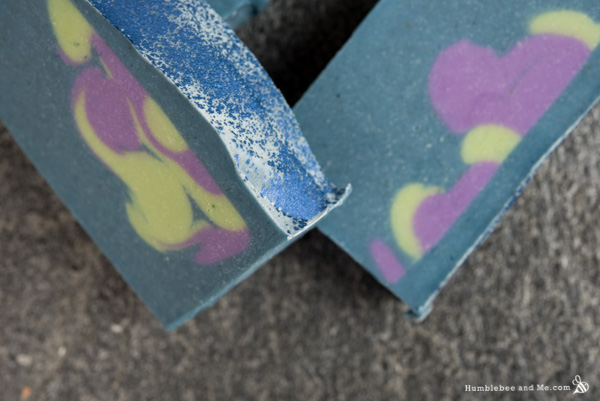 To create the ribbony swirls of the northern lights, we’ve also got bits of batter in bright green and purple, though you can certainly tweak this to match your favourite Aurora Borealis colour combinations! In order to get the visual effect you’ll need your batter to be quite thin, but you’ll also need to make sure you’re pouring the “lights” into the “sky” batter with enough weight to break the surface—watch the video to get a better idea of what I’m talking about, it’s really helpful! 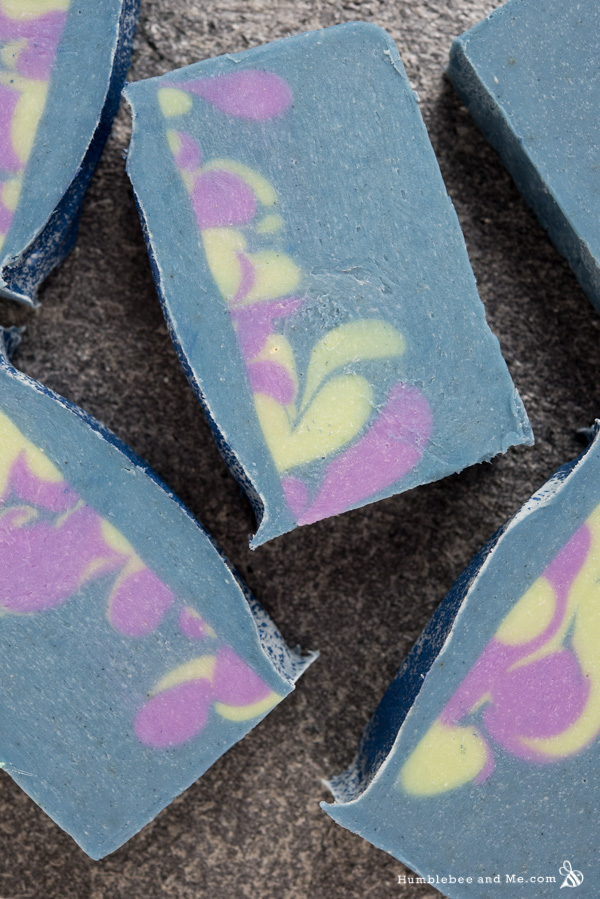 When you’re done pouring you’ll definitely have a bit of a Schrödinger’s cat kind of situation; I was positively itching to see what was going in inside the mould! Since I designed this batter to be quite soft so it would be really workable I recommend leaving it in your mould for at least three days, and perhaps even longer if you used a silicone mould like I did as those require a bit of soap smooshing and handling to free the loaf, and that will definitely damage a softer soap (popping in the freezer pre-de-moulding helps, too). 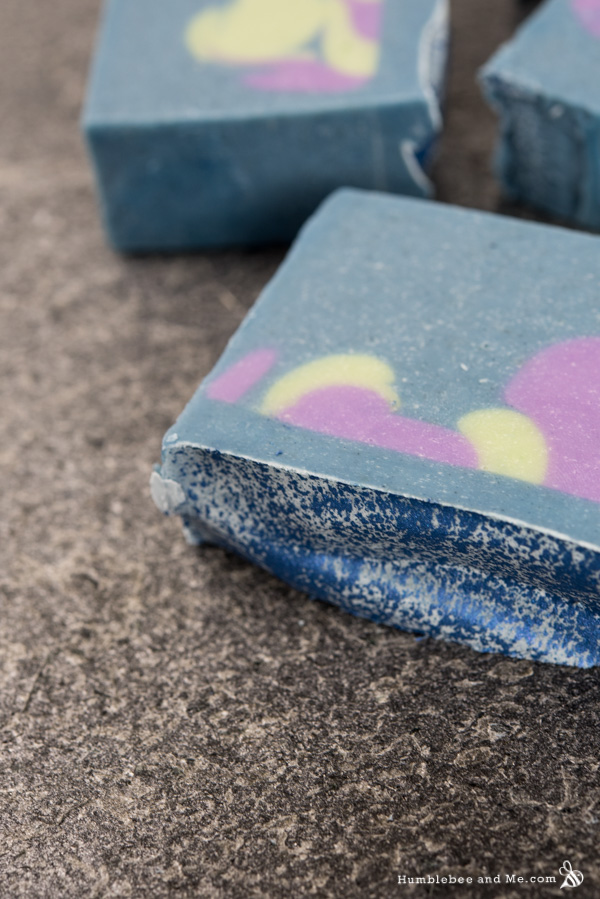 I hope you’ll have as much fun making this soap as I did, and relish the fun of cutting it and seeing how your northern lights turned out. Happy soaping!

Prepare your mould—you’ll want a loaf mould for this soap. Melt your oils together in your soaping pot, and have two containers with pouring spouts handy (I use these awesome funnel pitchers). Let your oils cool to slightly warmer than room temperature. Mix up your lye water and let that cool to about room temperature (you can use ice for part of your water to speed up the cooling process).

When you’re ready to start soaping, start by blending the clay into the oils until smooth. You can speed this along by blending a wee bit of oil into the clay to create a paste before adding that to the pot of oils. Once that is done, add the lye water and bring the batter to a thin trace.

Once you’ve added all of the green and purple batter, wait a couple minutes (try five; I waited ten and that was too long) and top the soap off with the rest of the blue batter. We don’t want a completely even line here, we just don’t want the remaining blue batter to obliterate our purple and green ribbons.

Finish up by sculpting the top of the soap a bit (watch the video to see what I did), and then dusting it with some dark blue mica. Leave the soap uncovered to saponify for at least three days (72 hours); I waited about 4.5 days (108 hours). If your mould is silicone, put the soap in the freezer for an hour or two before removing it from the mould to avoid damaging it. Gently remove the soap from the mould, slice it (through the side, to avoid dragging the topping through the loaf), and leave it to age for at least four weeks before using. Enjoy!