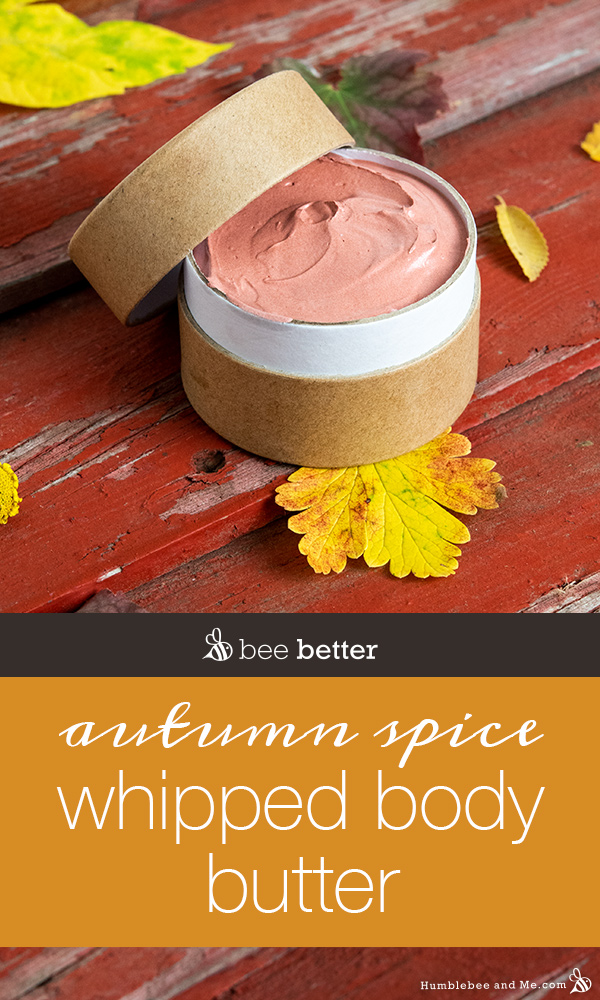 The bulk of this Autumn Spice Whipped Body Butter is a blend of two soft butters (mango butter + shea butter, both refined) and macadamia nut oil. Whipped body butters need a good dose of soft butters in order to turn out—soft butters provide the basis for a soft, whipped body butter. I chose a blend of mango and shea this time for the same reason I did back in 2016; mango butter has a really light, fast-absorbing feel on the skin that counters the heavier, greasier shea butter. Blended together we get a not-too-rich skin feel that’s quite lovely. These soft butters are then further softened with some ultra-light macadamia nut oil. I used pumpkin seed oil back in 2016, but I’ve since run out and haven’t bothered to replace it, so I thought macadamia nut oil would be a good alternative. 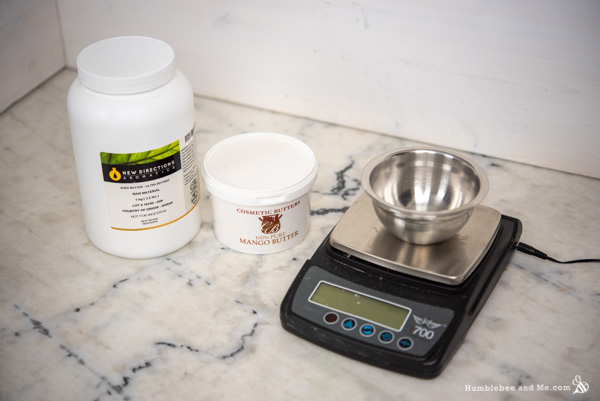 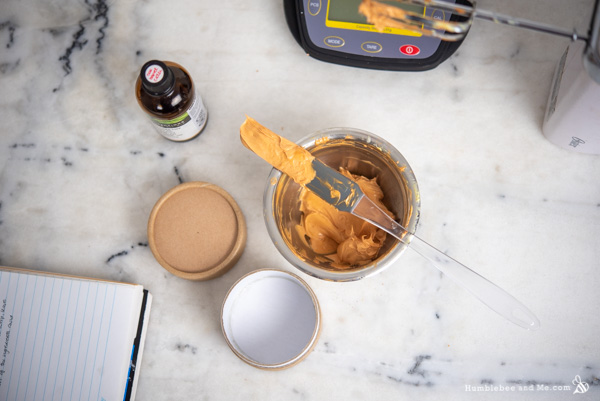 The trick with whipped body butters is balancing the soft butters and the liquid oil to just the right point—soft enough to stay soft and whippy, but firm enough not to melt while hanging around your house. This careful balancing act does mean your ambient temperature plays a big role in exactly what that perfect blend is. If you want to learn more about adjusting the blend (particularly for warmer climates—I doubt many people will keep their homes cooler than I do!), please read this blog post and check out the resources linked in it. 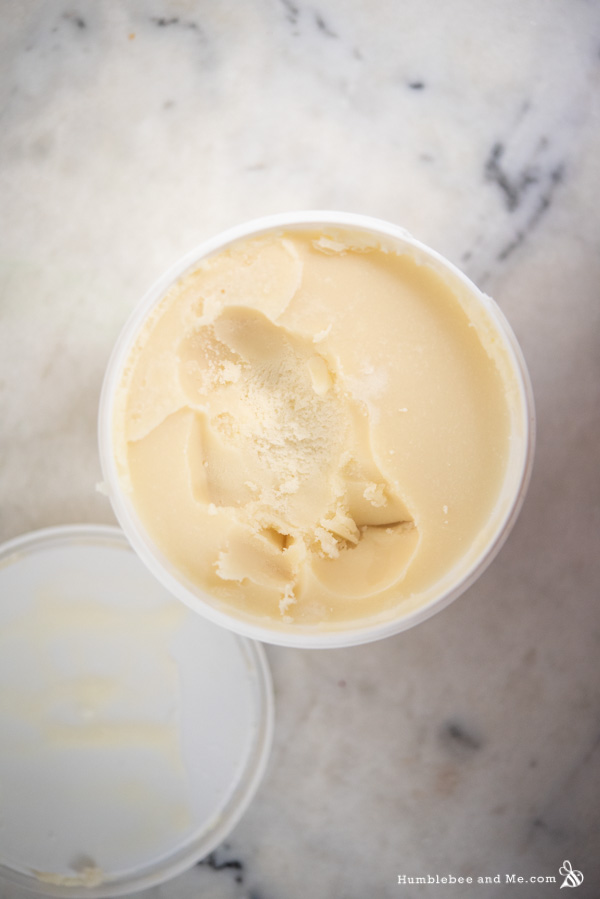 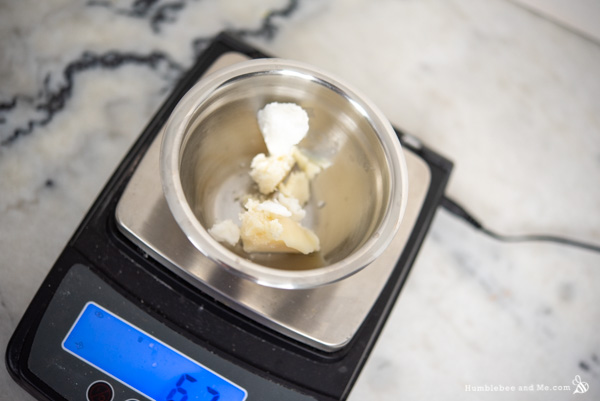 The aspect of this formulation I spent the most time and effort “Bee Better”-ing was the technique. The formulation I shared in 2016 used a freeze-whip-freeze-whip-etc. method that worked, but was a bit of a pain. One needed to set timers and really be “on” for a good twenty minutes or so for that batch size. Why whip it this way? Because whipping the butter warms it up (this is why it is possible to whip a butter blend have it look lovely at first, but when left to rest it hardens up), and if it gets too warm, it becomes too soft to whip. Since we really need to toe the line of “just firm enough” with our fat blend, it doesn’t take much whipping to make the butter too soft/liquidy to hold soft peaks. Alternating between freezing and whipping keeps the butter from getting too soft to whip. This is a fairly common technique for making whipped body butters, but I wanted to see if I could sort out some sort of alternative that wasn’t nearly so fussy. 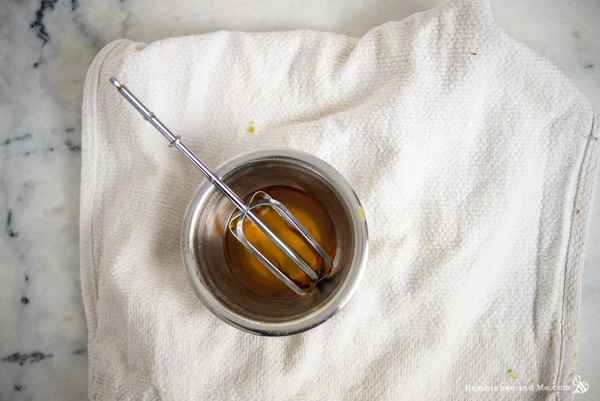 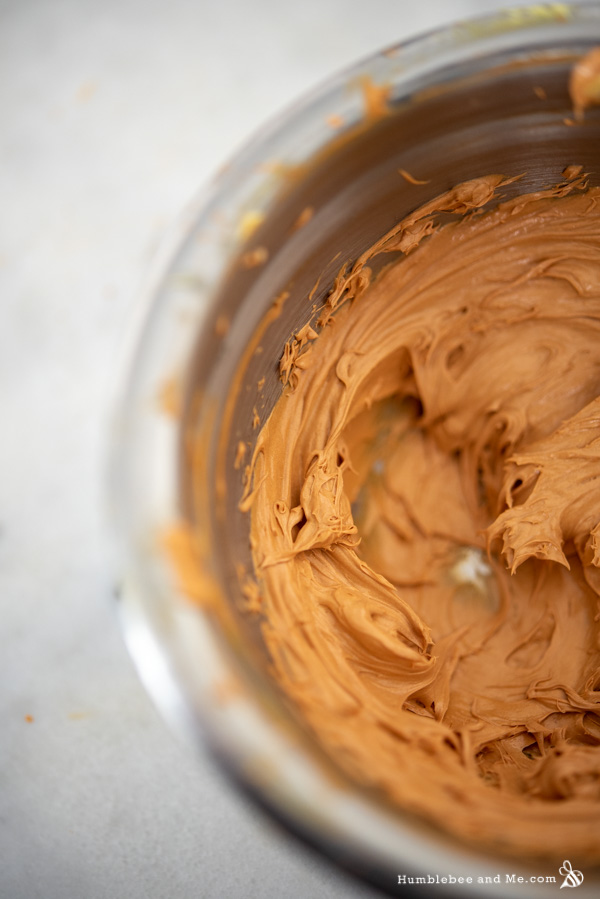 First up, I tried cold processing the mixture. That worked beautifully minus the skin feel, which was a bit mealy and unpleasant due to the mango butter. Every mango butter I’ve ever worked with has this consistency—not quite grainy, but also not perfectly smooth—that means melting is a requirement for ultra-silky finished products. So I melted that mixture and discovered that evening out those little harder bits had the overall effect of making the finished butter blend too firm, so I had to tweak the butter/oil ratio to keep things soft enough that the whipped body butter didn’t seize up within hours of whipping. 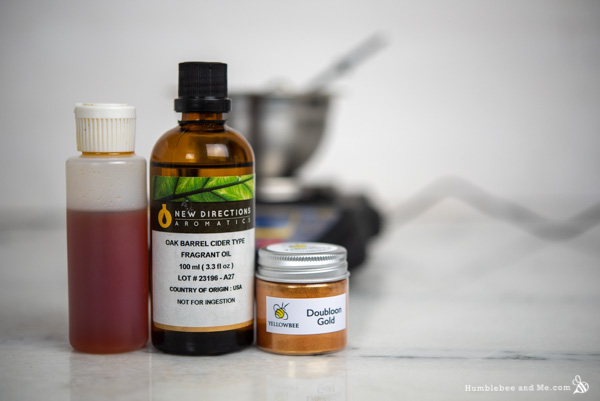 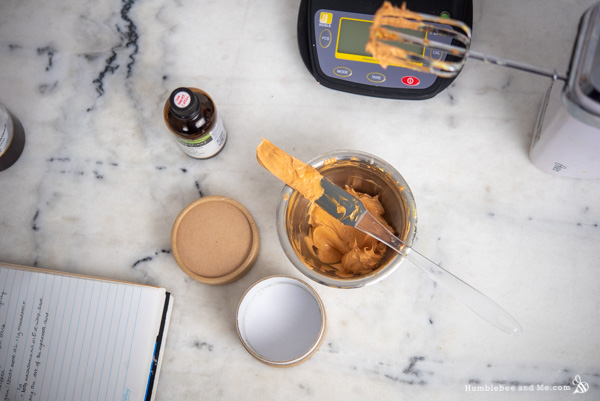 I opted not to try a full room-temperature cooling cycle as that can lead to grainy butters, and I also decided not to bother with hand-stir-tracing the mixture in an ice bath as I wanted a simpler method than that. I ended up with three methods that work equally as well, but one is faster and more foolproof than the others.

The slower of the two methods is as follows: melt the fat mixture, freeze it solid, and then remove it from the freezer and let it return to room temperature before whipping. The first whipping will look like a bit of a disaster—the mixture will be really liquidy and soupy, and won’t hold any peaks at all. At that point, you need to leave it for a few hours, and then you can whip it up beautifully—it’ll firm up a bunch just sitting on the counter after that first whipping, and it’ll have enough structure to whip up beautifully. I tried this method with a variety of timings for the freezing and the waiting, even re-doing the same batch, and it was always the same. The first whip was always a bit of an “oh, crap” moment, and then the second would get us where we wanted to be. Effective, yes, but there were quite a few rather long waiting periods in there, and those stretches of time would only get longer with larger batches. 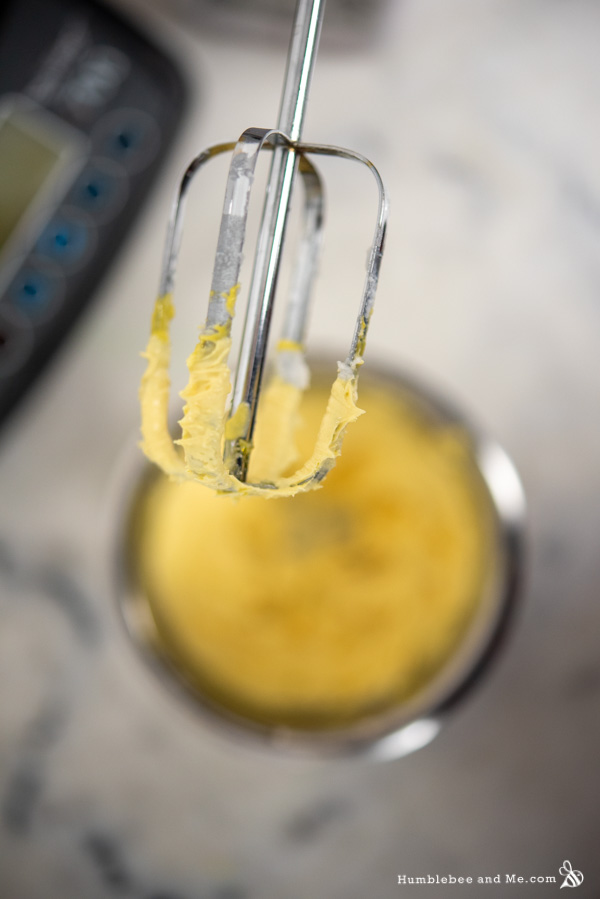 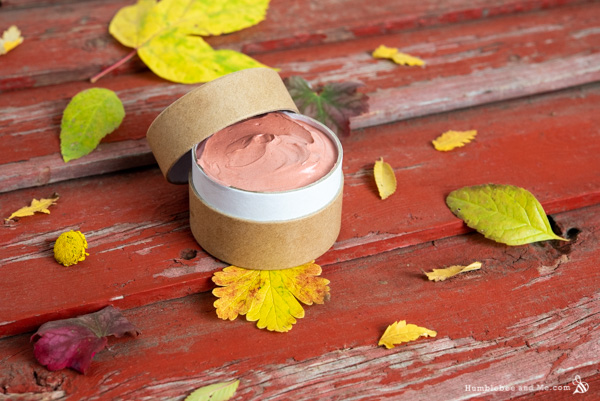 The faster method is melt, refrigerate until solid, and then whip. It’ll whip up beautifully without a soupy stage—as long as you don’t whip it too long. After that, I like to leave the mixture to really settle fully at room temperature before re-whipping it and packaging it up. I compared the end result of this method with the two previous, fussier/more time-consuming ones, and I think they’re identical. Here’s the thing, though—this only works for small batches (around 50g (1.76oz) or smaller). We’re counting on the chilled bowl countering the warming effect of whipping up the butters, and it can only counter so much. If the batch gets too big, or if you whip too long (which is required for larger batches—”enough” whipping is too much), or if the bowl doesn’t have enough heat capacity, it doesn’t work. The fat mixture will warm up too much, and won’t hold soft peaks. We’ll get that soupy stage from the previous method again.

So, the third method—it’s more or less an extension of the second. Basically, after chilling the fat blend in the fridge, we do the whipping in an ice bath. This does the same job as rapid freeze-whip-freeze cycles by keeping the butter cool enough to whip, but you don’t have to set any timers or move the bowl back and forth a bunch. 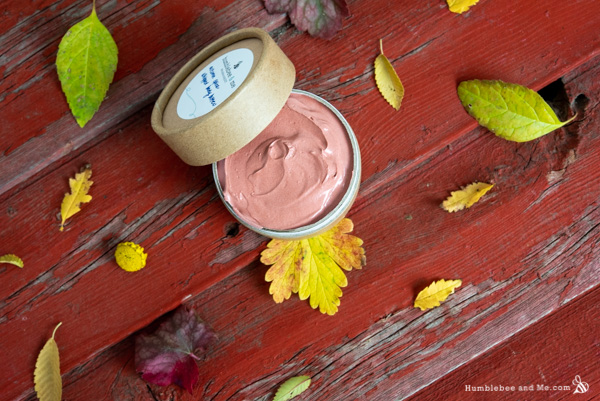 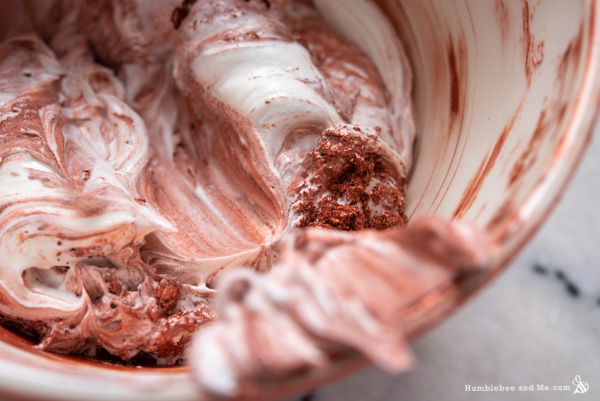 Beyond the method, the other thing I’ve changed up is the way this Autumn Spice Whipped Body Butter is scented. The 2016 version used essential oils of cinnamon, ginger, and clove, plus some vanilla-like benzoin resinoid, all measured in drops and blobs. I’ve since learned that cinnamon and clove essential oils are quite tightly regulated in terms of maximum usage rate due to the potential for irritating the skin, at 0.07% 0.1% respectively. While the amounts used in the original were quite low (5 drops and 1 drop in a roughly 100g batch), I’m not confident those amounts comply as I didn’t weigh them out. The clove bud almost certainly does, but I have my doubts about the cinnamon essential oil. When I weighed out 5 drops it came to be about 0.09g, which would constitute approximately 0.09% (too high), but given the variation in drop sizes and how easy it is to accidentally add another drop or two when counting drops, it’s almost inevitable that anyone who made that body butter would be overdoing it on the cinnamon essential oil. So, this Bee Better version uses a skin-safe autumnal fragrance oil instead. I chose the Oak Barrel Cider fragrance oil from New Directions Aromatics and at just 0.1%, it’s perfect. You could definitely use a different autumn fragrance oil if you want, but I would avoid the pumpkin spice essential oils.

The finished Autumn Spice Whipped Body Butter is a rich, whippy, decadent skin treat that’s perfect for fall. I hope you love it!

After about 20–30 minutes everything should be completely melted through. Remove the water bath from the heat, remove the measuring cup from the water bath, and dry it off with a dishtowel. Place the bowl in the fridge to set up and chill.

Once the heated phase has chilled to the point of being solid, prepare an ice bath. Take a bowl that is large enough to accommodate the container the heated phase is in, and fill it about halfway with ice cubes and cold water.

Weigh the cool down phase into the bowl with the solid fat blend, briefly whip, and then transfer the bowl to the ice bath and whip until light, fluffy, and marshmallowy, taking care not to get any water into the body butter. I’d recommend about 5 minutes of whipping for a 70g batch, with more whipping for a larger batch.

Once the body butter is all fluffy and lovely, leave it to fully come to room temperature for an hour or two. Then, give it a quick re-whipping to get it moving again and gently spoon (or pipe) it into a wide-mouthed jar.

To use, smooth some body butter over any skin that could use a bit of pampering. Enjoy!

Alternative method: The freeze-whip-freeze method used in the 2016 version also works beautifully—feel free to try both and see what you think!

Because this body butter is 100% oil-based, it does not require a broad-spectrum preservative (broad spectrum preservatives ward off microbial growth, and microbes require water to live—no water, no microbes!). Kept reasonably cool and dry, it should last at least a year before any of the oils go rancid. If you notice it starts to smell like old nuts or crayons, that’s a sign that the oils have begun to oxidize; chuck it out and make a fresh batch if that happens. 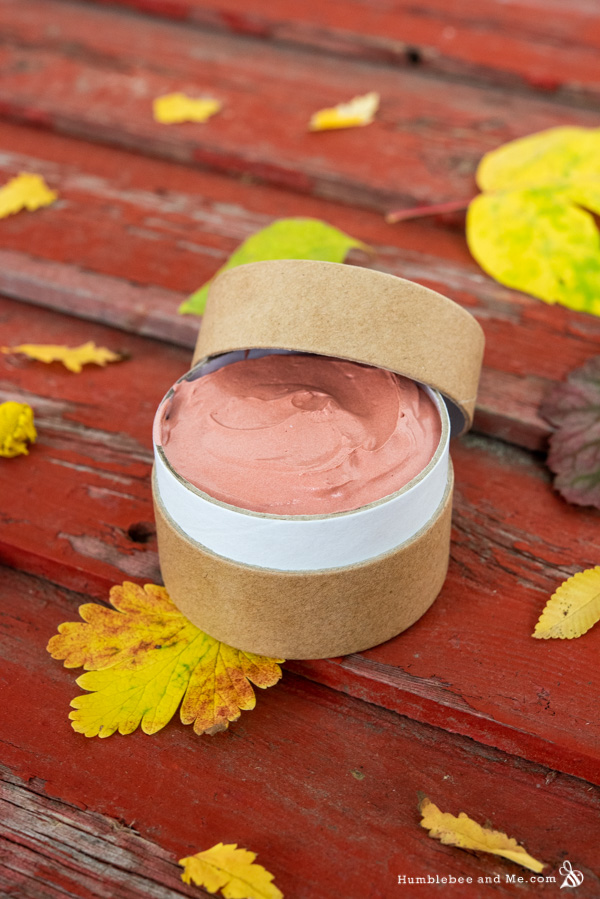 The paperboard jar and Doubloon Gold mica were gifted by YellowBee. The mango butter was gifted by Mystic Moments.