I had a heck of a time trying to name this fun DIY! Generally speaking, it’s a sort of play-dough for the bath or shower that can be sculpted into whatever your heart desires, used as a body wash, and/or crumbled under a running tap to create all kinds of bubbles. Bath Squishes? Bubbly Bath Squishies? Tub Flubber? Sudsy Tub Flubber? Sud Putty? Tub Putty? Bubbly Bath Putty? Tubber Bubble Flubber? Bubble Tub Flubber? Hmm. In the end, I settled on Bubbly Bath Dough simply because it clearly communicates what we’re making, but dangit… I really liked Tubber Bubble Flubber 😂 (Try saying that ten times fast!) 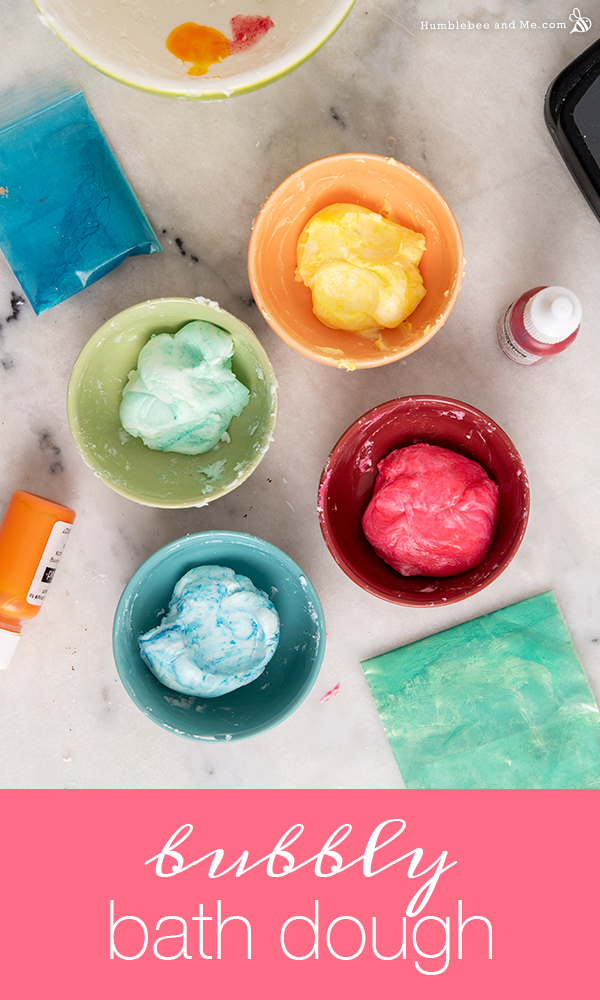 I was inspired to squish up this fun putty by a popular LUSH product. The ingredient list was pretty dang simple, and I loved the idea! I mean, who doesn’t want to smoosh together a tiny snowman on the side of the tub before smashing it to smithereens and using it to wash with? Anyone? Just me? I’ve actually been playing with and tweaking this formulation since the summer of 2018; I’m not sure why it’s taken me so long to share it, but here we (finally) are! 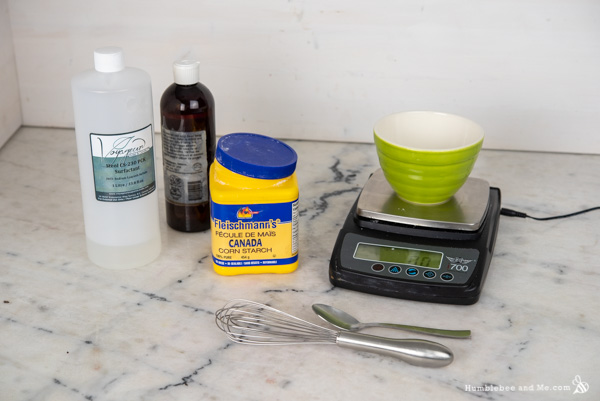 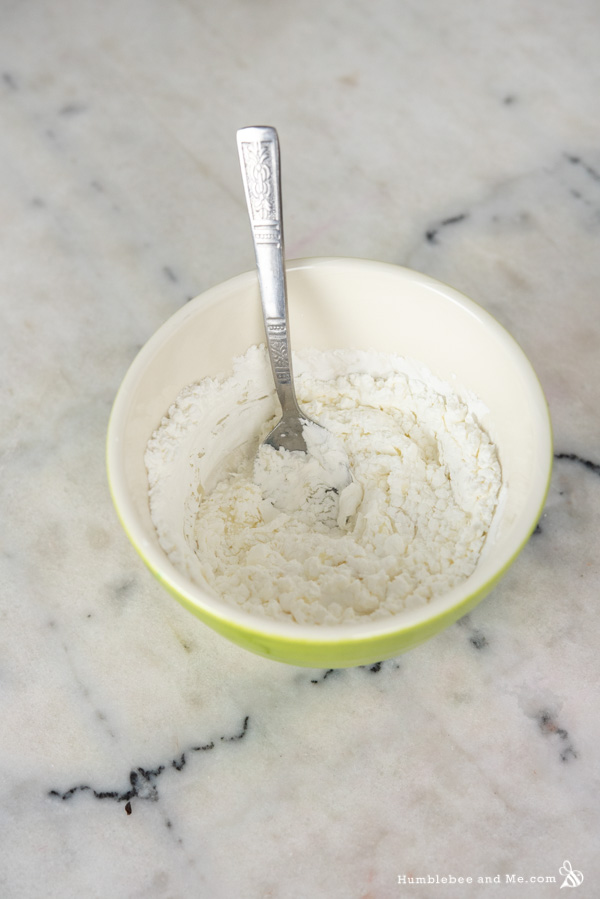 The bulk of this Bubbly Bath Dough is simple, silky corn starch. That is then blended with just enough vegetable glycerin and Sodium Laureth Sulfate (SLeS) to create a soft, pliable dough. I did experiment with using Sodium Lauryl Sulfoacetate (SLSa) instead of Sodium Laureth Sulfate (SLeS) for a non-sulphate version, but it honestly didn’t perform as well. This version has a 6.24% active surfactant matter (my SLeS is just 26% active) and kicks off tons of gorgeous bubbles—far more than a whopping 22.75% ASM of Sodium Lauryl Sulfoacetate (SLSa) did. I do not recommend swapping out the surfactant. 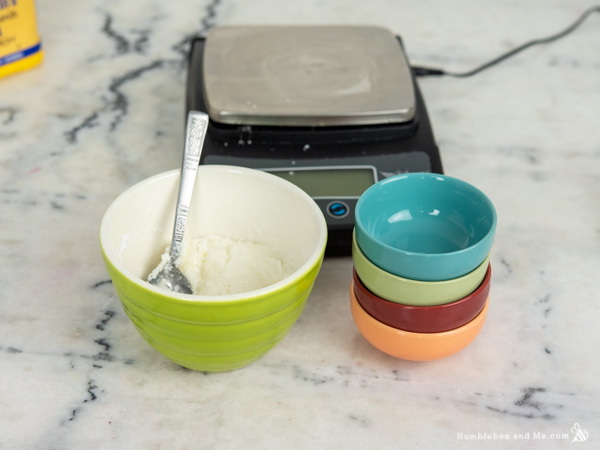 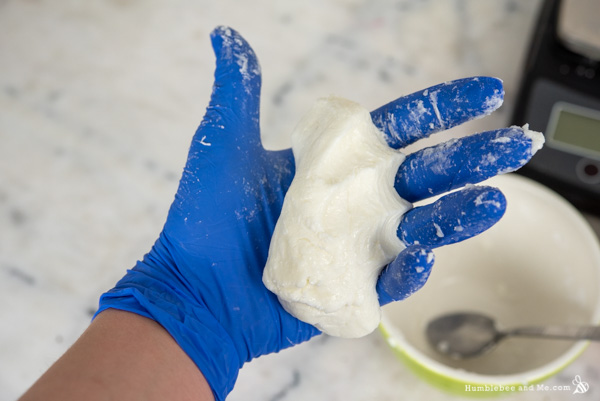 Those three ingredients (plus a preservative) create the base of the dough, and from there, it’s yours to customize with scent and colour! I recommend including your bath-safe essential oil or fragrance oil in the parent batch of dough, and then dividing that batch into a few different parts and kneading a bit of mica into each part. Is that extra-super precise? No. Does it really matter here? … I’d argue no. I have included the mica in the formulation, but even if you over-shoot it a bit, the preservative will very likely still be in its effective range (and even if you managed to add so much mica that it wasn’t, this formulation is very likely self-preserving given the very high glycerin content). Have fun with this, and get your kids involved in the colour mashing if you want to! 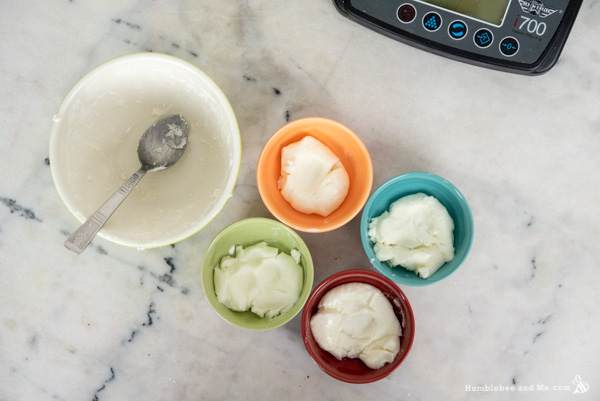 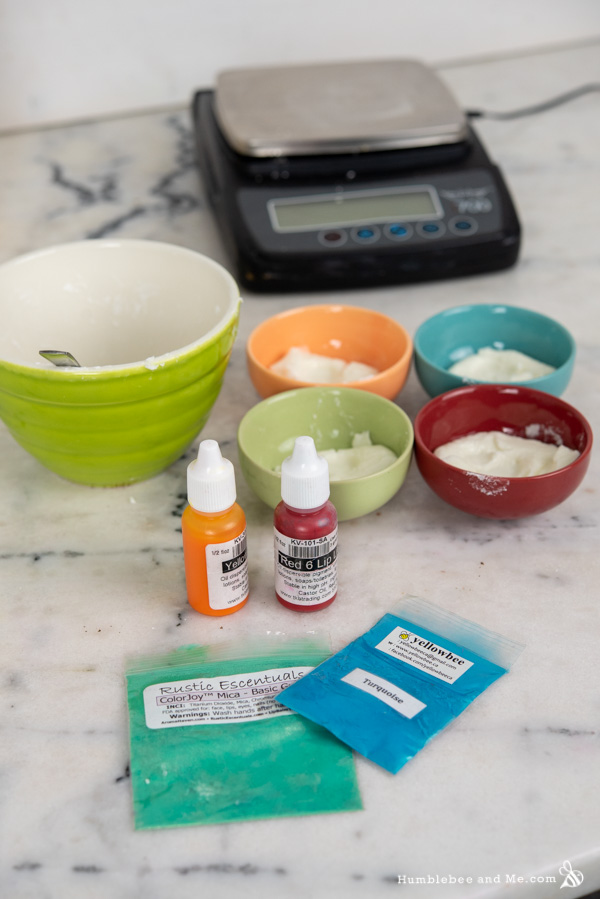 Something else that’s super cool about this Bubbly Bath Dough (and makes it a great science project for kids and grownups alike)—it’s a non-Newtonian fluid! That is, the viscosity changes when force is applied to the mixture. Left to its own devices, this Bubbly Bath Dough behaves like a very viscous liquid. However, as soon as you start playing with it, it stiffens up like crazy into a firm, pliable dough. It’s so cool—you’ve got to watch the video to see it in action! If you have kids I think it would be a ton of fun to make this Bubbly Bath Dough with them and teach them about non-Newtonian fluids 😄 Here’s a fun educational video on the topic! 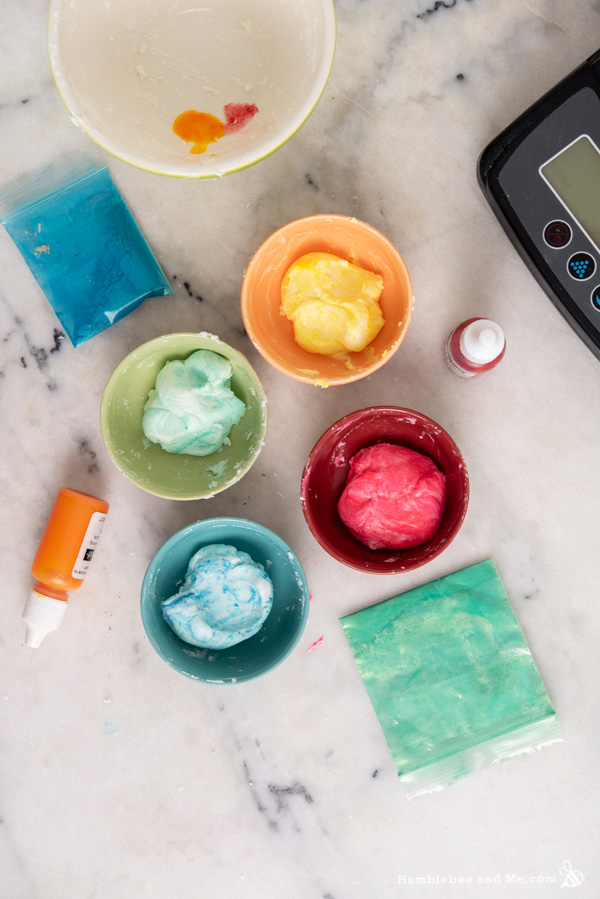 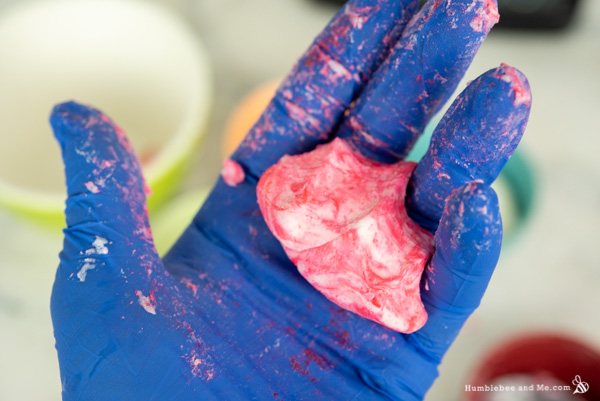 Smooshing up some Bubbly Bath Dough!

For storage: I recommend keeping this dough wrapped tightly in plastic so it remains soft and pliable for as long as possible. This could mean storing it in a plastic bag with the extra air squeezed out, wrapping it in plastic, or putting it in a jar and pressing some plastic over the surface before sealing the jar. Depending on how dry it is where you live, this Bubbly Bath Dough can dry out pretty fast; I left some in a sealed jar that still had some headroom (a 30g [1.06oz] batch in a 50g [1.76oz] jar) and it with more of a crumbly bath lump than a bath dough in less than two months. When left exposed to the open air that happened in less than 48 hours. It’s certainly not a waste if it dries out, you just can’t sculpt it anymore—simply crumble it under running water for a bubbly bath treat!

The finished dough is oh-so-fun! Squish it into all kinds of shapes and characters, rub it into a loofah, or crumble it under running bathwater. It’s a blast!

Weigh the cornstarch, glycerin, Sodium Laureth Sulfate (SLeS), fragrance or essential oil, and Liquid Germall™ Plus into a bowl. Stir to combine.

Once the mixture is uniform you can divide it up and knead different coloured micas into each part. Alternatively, you can make the entire batch one colour and include the mica right from the start.

To use the Bubbly Bath Dough, portion out a single-use amount (I don’t recommend taking the entire batch into the tub with you as the consistency changes a lot when it gets wet). You won’t need much (perhaps a teaspoon or less) if you want to use it as a bubble bath or body wash; you’ll need more if you want to sculpt a bunch of fun characters and shapes 😊 Watch the video to see it in action!

Because this Bubbly Bath Dough contains a small amount of water (it’s in the surfactant), you should include a broad-spectrum preservative to ward off microbial growth. In the event you notice any change in colour, scent, or texture, chuck it out and make a fresh batch. I recommend using up a batch in three months or less; not because it’ll spoil, but because it will dry out. 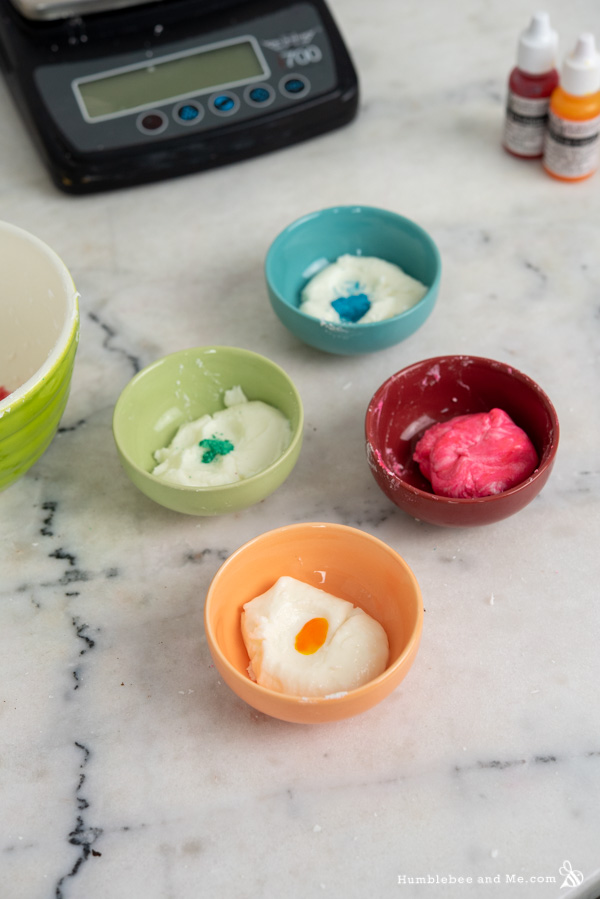 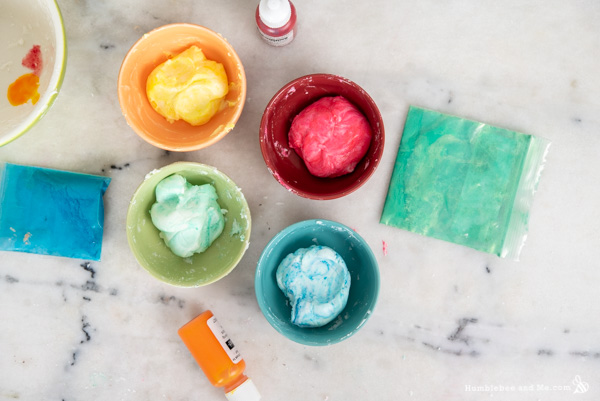 The micas used in the video + and the blue one from the blog were gifted by YellowBee.