If dry winter lips are driving you up the wall, I think you will love this rich and creamy Candlelight Lip Butter with Hyaluronic Acid. It stars a base of luxurious and deeply moisturizing ingredients while also boasting lip-plumping and anti-ageing effects. Let’s dive in! 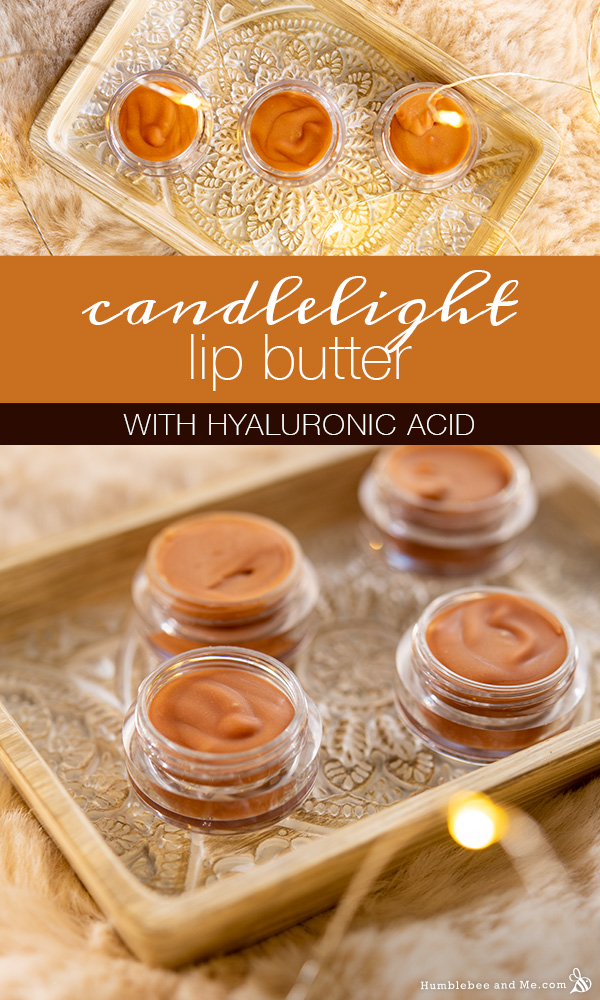 The bulk of this decadent homemade lip butter is jojoba butter (gifted by Voyageur Soap & Candle). Jojoba butter is a pseudo butter, meaning it’s made from blending jojoba oil with a hydrogenated vegetable oil (in this case, soybean oil). I choose a pseudo butter because wanted this formulation to be rich and creamy and buttery, but I didn’t want it to go grainy on you (or your giftees!) throughout use. One of the reasons butters can go grainy over time is temperature fluctuations, and lip products are often exposed to more temperature fluctuations than a body butter might be because they get tucked into pockets (next to our nice warm bodies) and carried around for hours, and then removed at the end of the day. Body temperature is around 37°C and room temperature is around 21°C, so that’s a pretty sizeable ~16°C temperature fluctuation—do that day after day and there’s a decent chance the butter in a formulation will eventually go grainy. Pseudo butters aren’t prone to graininess in the same way true butters are, so I chose a pseudo butter for this formulation. I thought jojoba butter was an especially lovely choice as jojoba butter is a gorgeous moisturizer! 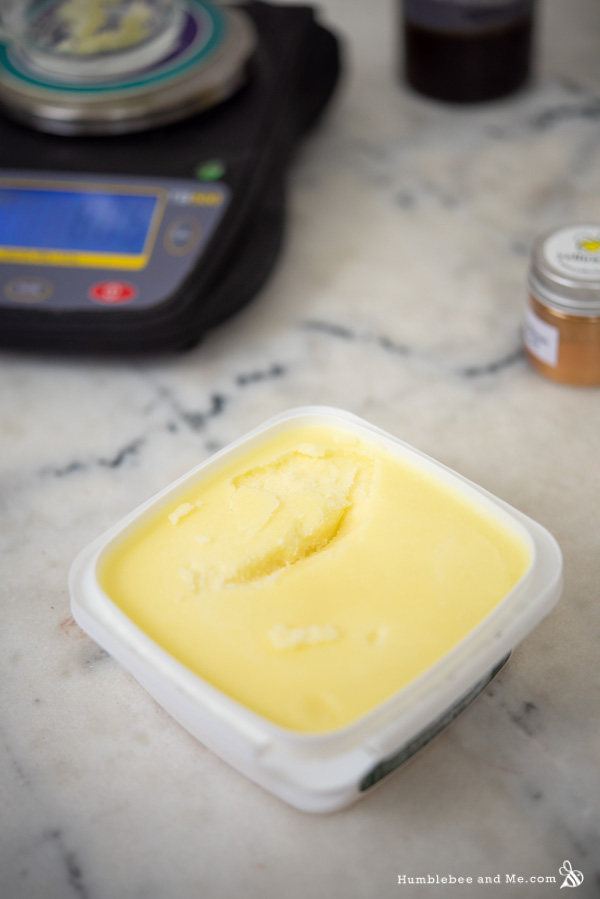 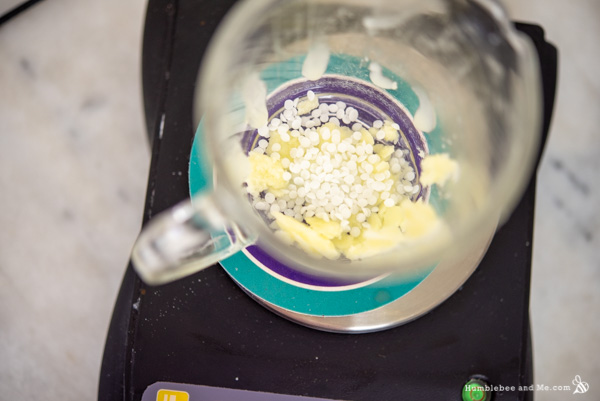 In keeping with the decadent, creaminess of this year’s Candlelight theme I’ve complimented the jojoba butter with luxurious argan oil, rich castor oil, and deeply moisturizing lanolin. I’m really excited about the lanolin in this formulation; it’s refined lanolin (USA / Canada)! My patron and long-time reader Zil introduced me to it; it’s sold as nipple cream for breastfeeding, but if you look at the ingredients, it’s entirely ultra-refined lanolin. It’s a bit softer than unrefined lanolin, and it doesn’t smell (or taste!) like much of anything! I immediately started thinking about all the formulations I could make with tons of lanolin if I wasn’t worried about the smell or taste of the unrefined stuff and this is the first one I’m sharing 😄 Thanks, Zil! 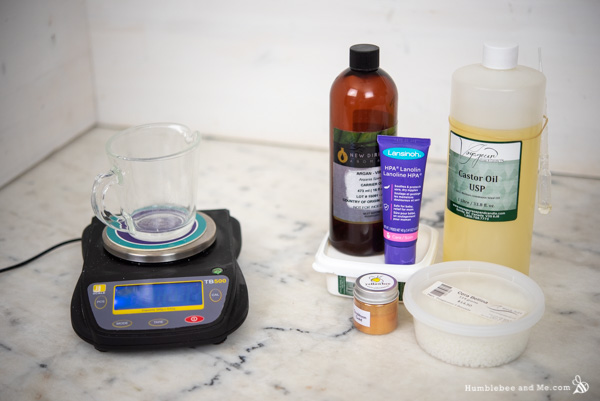 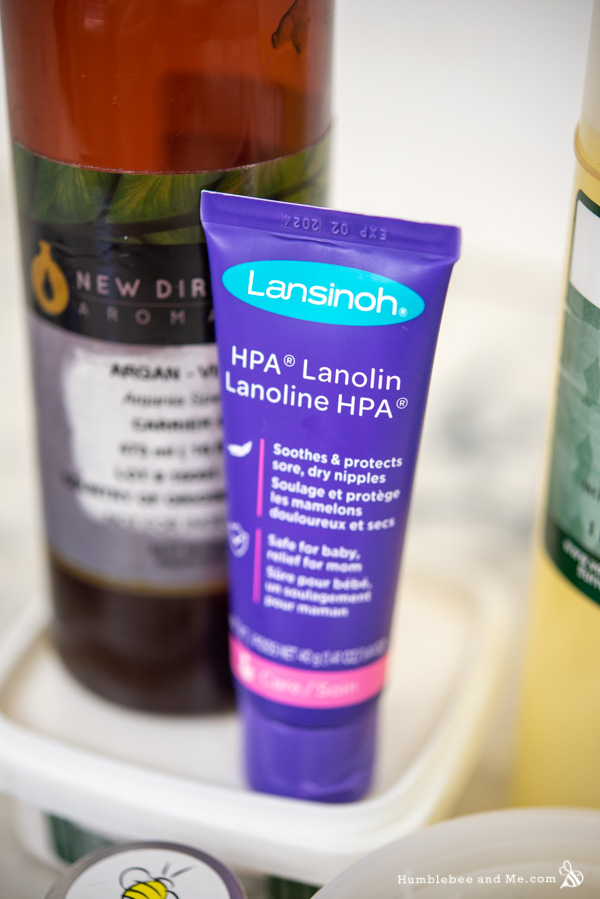 For added creamy richness I’ve also included some cera bellina; this neat modified beeswax creates rich and ointment-y formulations, which was just what I wanted for this lip butter. I don’t have a great vegan alternative, I’m afraid—for the lanolin or the cera bellina. Together they comprise 30% of the formulation, so if you are looking for vegan formulations I don’t think this one is for you. I’ve shared several vegan lip balm formulations over the years, but all of the extra creamy ones involve some combination of lanolin and/or beeswax because those two ingredients are so great at bringing creamy richness to formulations. 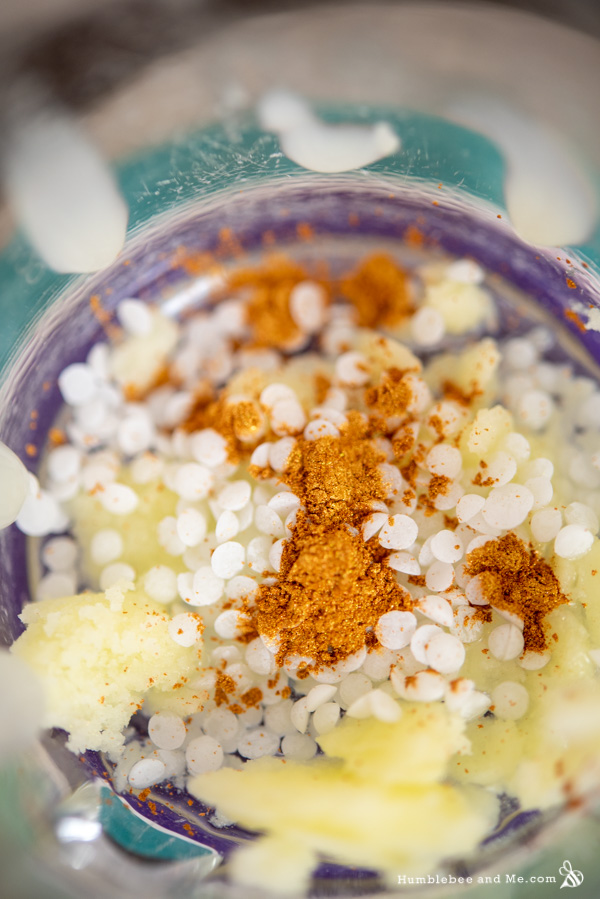 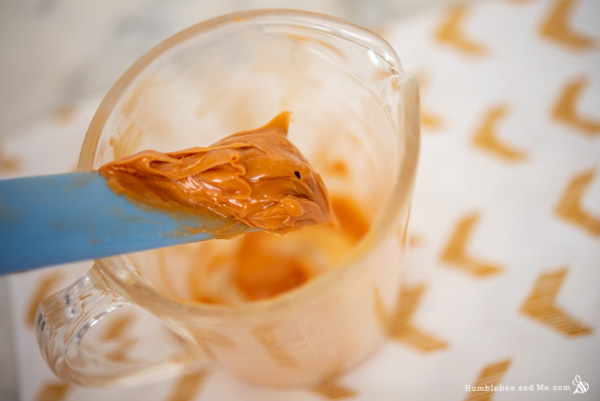 The final luxurious touch for this formulation is a wee bit of Hilurlip®. Hilurlip® is a blended ingredient made by Lipotec with the INCI: Isohexadecane (and) Ethylene/Propylene/Styrene Copolymer (and) Butylene/Ethylene/Styrene Copolymer (and) Sodium Hyaluronate (and) Xanthan Gum (and) Phenoxyethanol (and) Tripeptide-1. It is designed to plump and moisturize the lips, boasting anti-ageing effects and long-term moisturizing and volumizing. It’s pretty neat! It’s also somewhat pricey and only available to home crafters from Lotion Crafter, so if you don’t have it just use more jojoba butter (more details in the substitutions list at the end of the formulation). 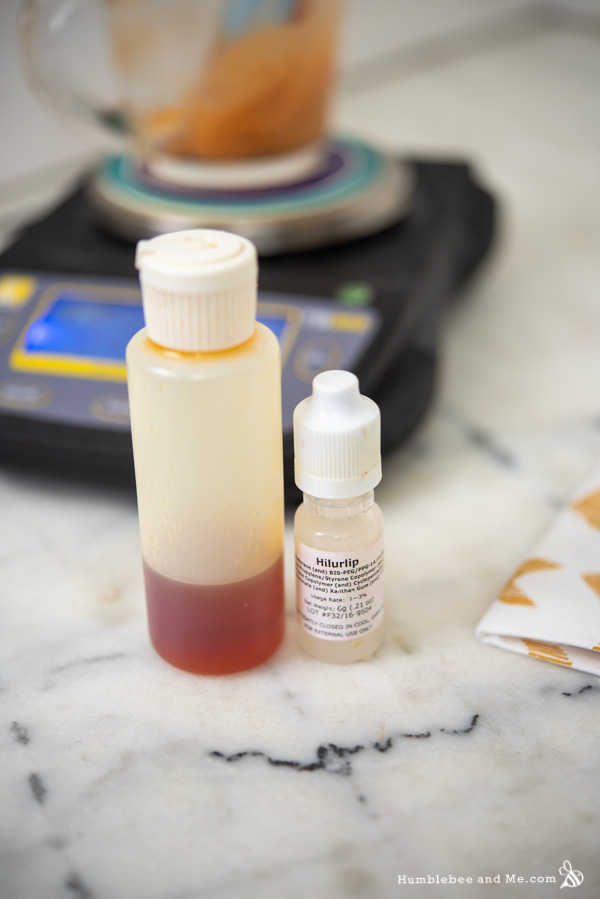 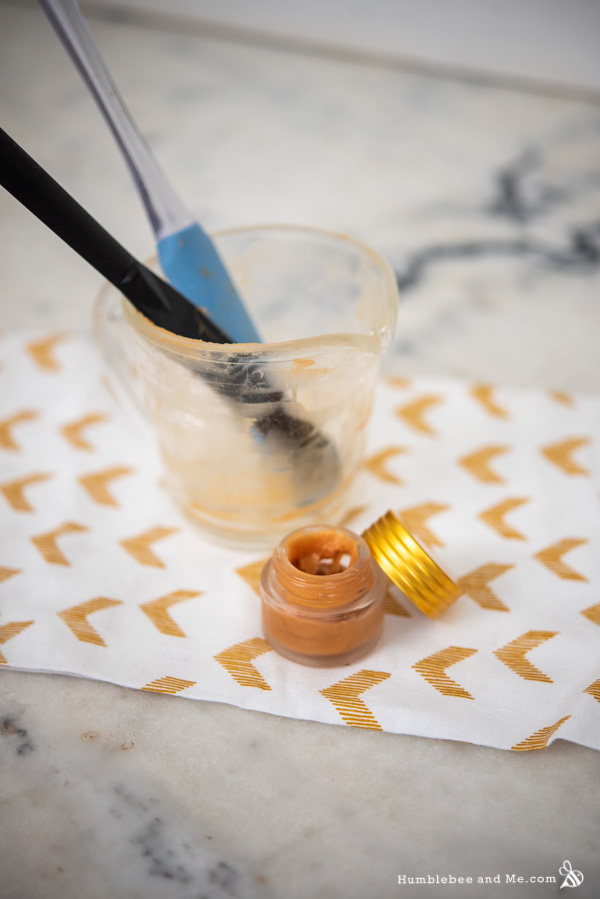 This lovely jar was purchased years ago from New Directions Aromatics; unfortunately, they’ve been discontinued!

Making this is very simple; because the Hilurlip® needs to be incorporated at cooler temperatures this does need to be packaged in a tin or jar rather than a screw-up tube (trying to get a rapidly cooling already semi-viscous liquid into a screw-up lip balm tube is an exercise in frustration and futility). Enjoy!

Keep stirring until you’ve reached a light trace (watch the video to see what I mean!), and quickly add the cool down phase. Stir to incorporate, and pour the lip butter into its container. Leave it on the counter to set up.

Use as you’d use any lip balm or butter. Enjoy!

Because this product does not contain any water, it does not require a broad-spectrum preservative (broad spectrum preservatives ward off microbial growth, and microbes require water to live—no water, no microbes!). Kept reasonably cool and dry, it should last at least a year before any of the oils go rancid. If you notice it starts to smell like old nuts or crayons, that’s a sign that the oils have begun to oxidize; chuck it out and make a fresh batch if that happens. 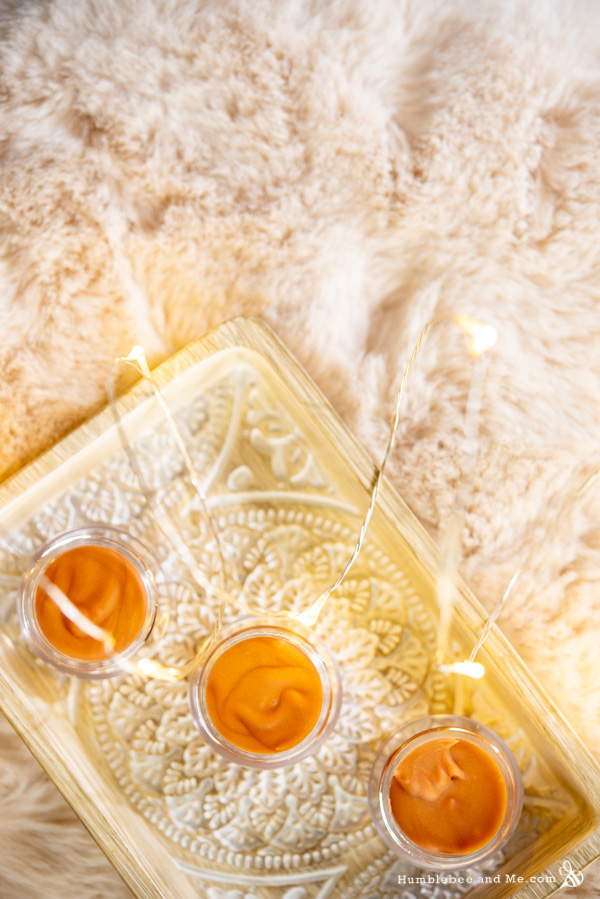 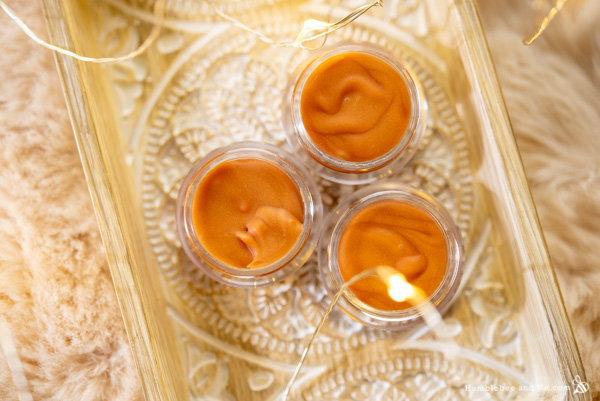 The gold mica was gifted by YellowBee.
The jojoba butter was gifted by Voyageur Soap & Candle.
Links to Amazon are affiliate links.