This may seem a bit early for Christmas, but with soap’s minimum 3-week aging time, it’s actually a bit late. I made this soap the second week of November with my friend Jess to have it ready in time to give as Christmas gifts. It’s a great bar; seasonally coloured and scented with all my favourite Christmas smells. Cinnamon, cloves, oranges, and vanilla. Yum. 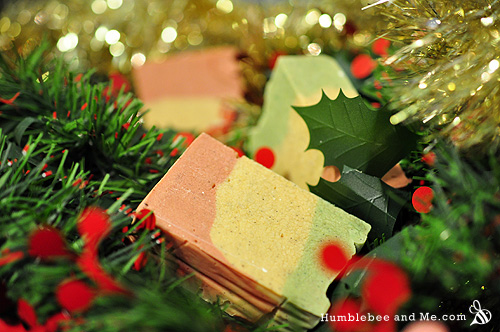 The recipe is pretty standard. I used oxides for the colours and vanilla flecks for a bit of texture and the vanilla scent. A bit of clay adds some slip and extra cleansing oomph, and unrefined shea butter (USA / Canada) adds some luxury.

Follow my basic soap making instructions, adding the clay, vanilla flecks, and essential oils at trace. You’ll want a good, thick trace so you can get distinct layers. Divide the soap into thirds. Colour one batch red, one green, and leave one for your white/neutral layer. Layer them in the mould with the neutral in the middle. Sharply rap the mould on the counter to knock out any air bubbles.