The last time I was in Sephora I noticed funny little pots of distinctly non-face coloured goop. That you were supposed to put on your face. It came in a selection of pastels, including minty pink, lavenderish purple, and some sickly looking yellows and oranges. As a designer I figured these were either a) very boring face paints or b) some sort of opposite-colour correcting device type thingy. 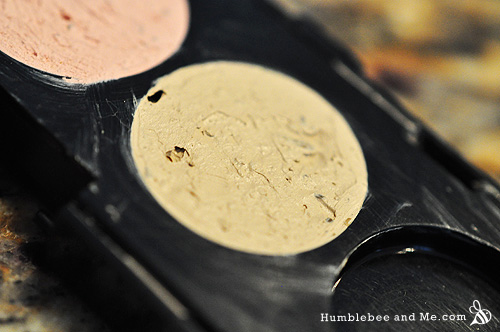 It turns out it was b. I didn’t really think much of it until I saw the greeny one that looks like choc-mint ice cream (without the chips, obviously) used in the first bit of this video. Up until this I would have guessed that you would be left looking like Elphaba or the Grinch who stole Christmas. Guess not. 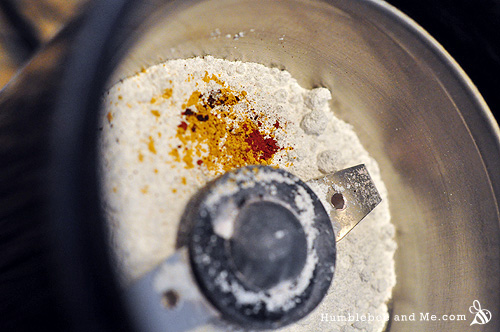 Starting to blend the oxides in with the cosmetic powder base.

So I thought I would take the idea home and do it myself. Now, I’ve tried foundation before. I made it as a lotion, and it was sort of ok at first… actually, I’m lying, it was pretty crap from day one. This was before I had any titanium dioxide or anything proper for making cosmetic-y type things, but all the same, it was crap. Anyhow, this time, after making my own Eye Bright and Brow Fixative, I thought I’d go entirely oil-based. 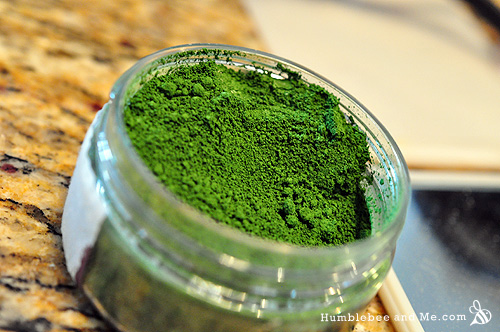 For my oils, I selected tamanu for its healing powers, sea buckthorn for its supposedly legendary anti-acne wonders, and jojoba for its general awesomeness. I figured the mixture might counteract any general unhappiness from the skin at being covered up for being a little more red than deemed appropriate. I thickened the whole mixture with some beeswax. 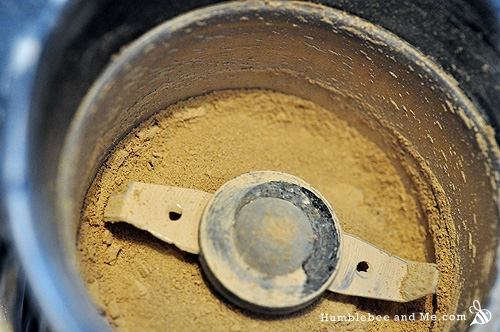 This is the final colour of the dry powder, green and all—doesn’t look green at all, eh?

For the colorants, I used a mixture of oxides blitzed in with my Cosmetic Powder Base to get something close to a skin tone, and then added the teensiest amount of green chromium oxide to get that green tint I wanted. In the end, I didn’t get anything close to a green tint—I got a slightly unhealthy looking skin tone. But I tested it on my skin as I added the green, and by the time I got to where I stopped, it was doing the trick (cancelling out the red without making me look like the Wicked Witch of the West) without looking like mint ice-cream. So I stopped. 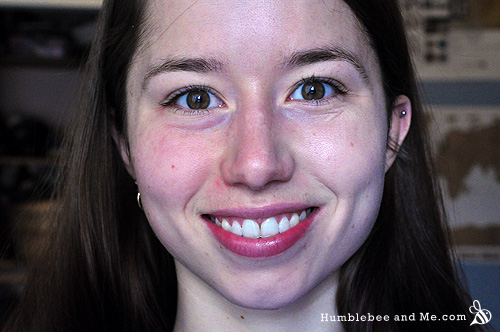 I don’t have an overly red complexion, so I’m using my rosy cheeks as my demonstration ground. The cheek on the right has the concealer on—see? Red be gone! It just looks a little funny when you know I should have pink cheeks 😛

As with my mineral make-up, this is all about blending in oxides to get the right colour for your skin tone. The measurements I’ve provided for the oxides are for my skin tone, and may be a good starting point if you’re on the paler side, like I am.

Anyhow, basically just put the cosmetic powder base in a coffee grinder and slowly start adding oxides, blending between additions and testing on your skin, until you more or less match your skin tone.

Once you’ve matched your skin tone, start adding minuscule bits of green chromium oxide, testing the resultant powder out on a redder-than-usual patch of skin. It won’t take much green to come up with something that will cancel out redness, so work slowly!

While you’re blitzing and blending, melt the oils in a small saucepan over medium heat. Once you’ve got the powders to the right colour, mix 1 tsp of the melted oils with ½ tsp of the powders. Mash everything together with your finger, re-heating in the microwave as needed to keep the oils melted. When combined, pack into a shallow tin.

To apply, pat across red parts of the skin and blend in with your fingers. Apply sparingly to avoid looking dead! 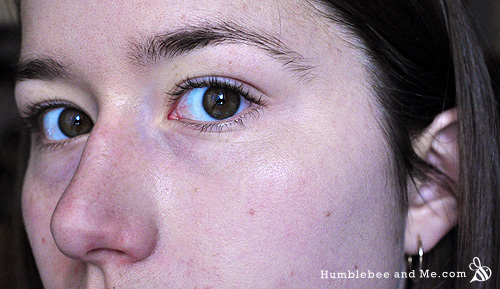 A closer shot of the cover up on the skin. It’s pretty subtle, and not at all cakey.