Once I found out about cream soap (and specifically whipped cream soap), I immediately wanted to make some, so I googled it to find out what it was, and how to make it. And it turns out it’s a “secret”. As in you have to join a specific Yahoo group and are then prohibited from publishing any such recipes anywhere else. And I think that’s crap. I mean, I spend heaps of my free time developing and sharing loads of my own recipes for free online (200+/year), so I’m obviously pretty keen on open source. So, I set off to figure it out on my own, and then blog about it out in the open. 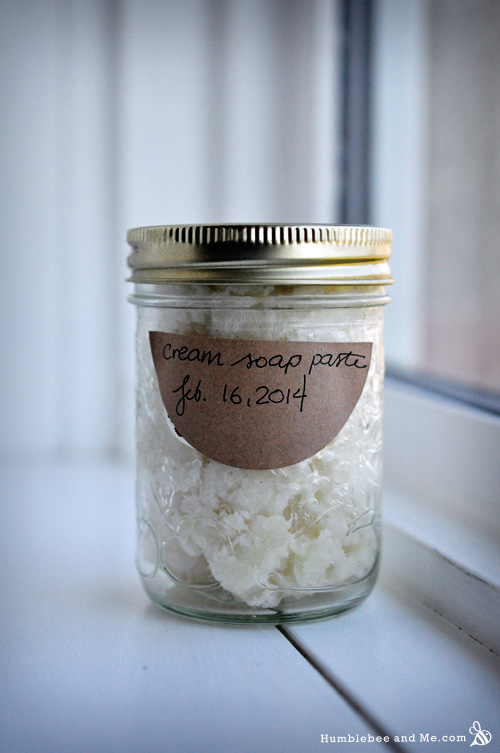 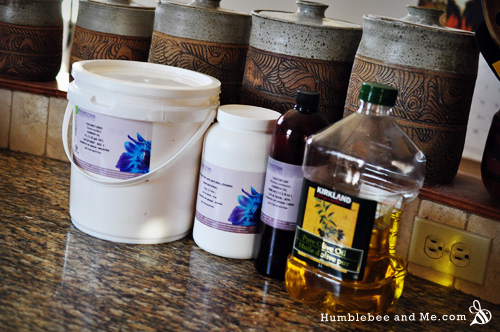 From what I gleaned from my Yahoo-group-free research, stearic acid is a big part of cream soap. Also, you use both Potassium Hydroxide and Sodium Hydroxide. And, at some point, you whip it (whip it good). After that, well, it was an open playing field for experimenting. Exciting! 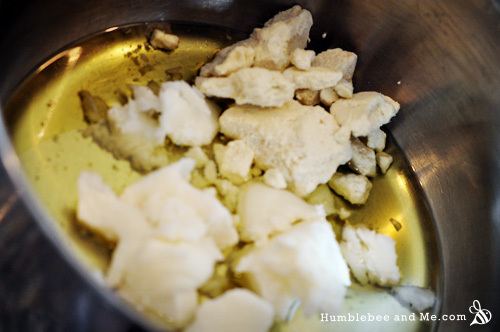 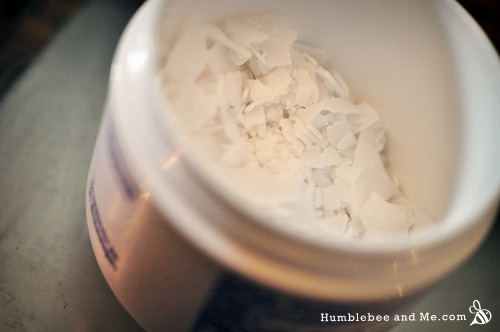 So, this was my first base experiment, and combined with many whipping experiments, it worked! This part was borne of my DIY date with Colleen. After we had our awesome liquid soap breakthrough, I proposed this as project #2. She was intrigued, and I was pretty sure nothing too terrible would happen if we blended two different types of lye, so off we went. 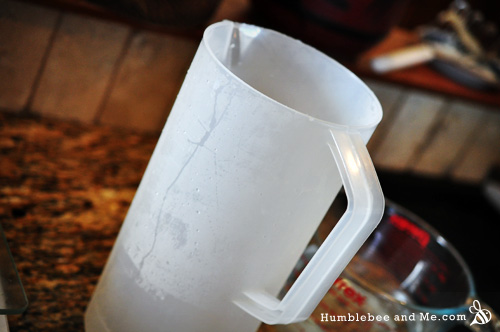 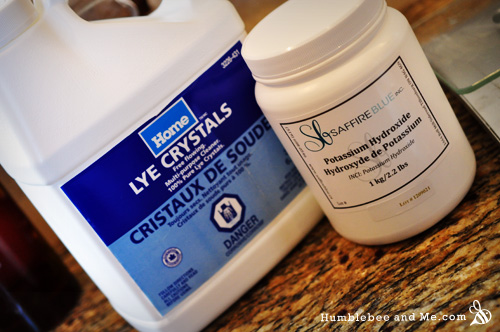 We started with the same blend of oils that we used for our liquid soap paste, for a control. Then, we calculated the recipe at a 5% superfat, using 50% potassium hydroxde, and 50% sodium hydroxide. To do this, I ran the recipe through the calculator three times, twice for half the desired total volume (one using KOH and one using NaOH), and once at the total volume to get my numbers for the oils. 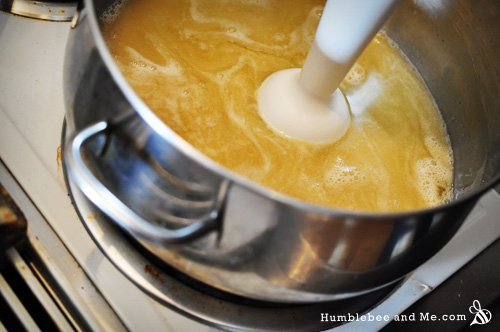 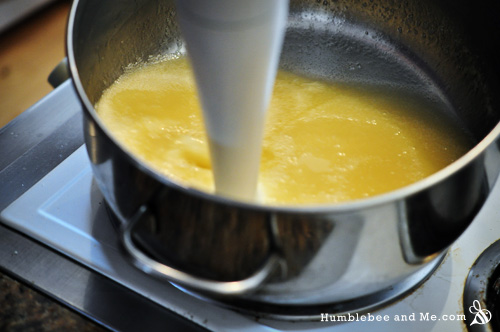 The process is the same as for my liquid soap—basically hot processed. The final paste came together perhaps a tad faster than straight liquid soap, and was quite a bit more opaque and chunky looking than liquid soap. 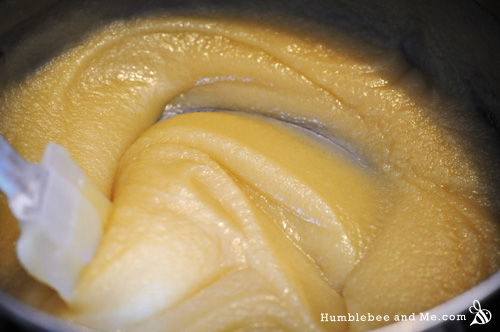 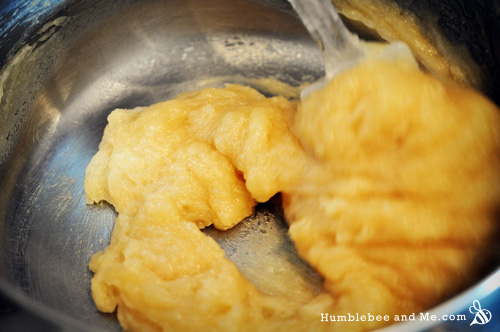 I decanted the cooked paste into two 250mL mason jars, labelled them, and set them aside for further projects. So far I’ve worked out about half a dozen different ways to use this paste in awesome creamy ways—far too many to cover as part of this entry. So, whip up a batch of this base and set it aside—the first whipped soap recipe comes out in a couple days 🙂 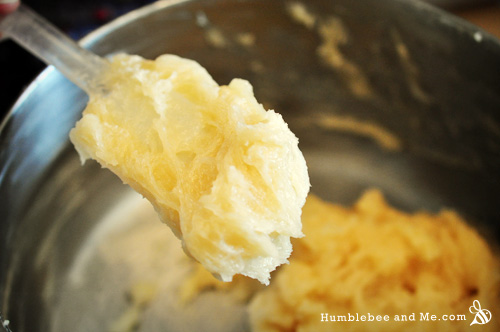 This is the creamed butter stage—we’re getting there! 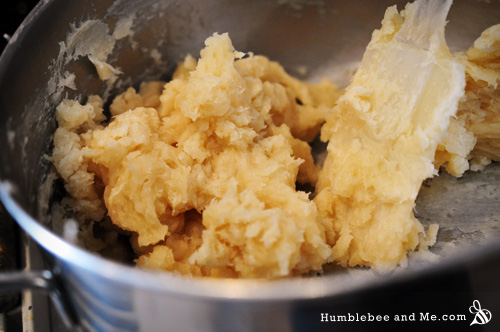 This is the clumpy mashed potato stage—we’re done!

2019 update: I’m afraid I can’t offer much in the way of detailed troubleshooting information for this project as I haven’t made whipped soap in well over 4 years and my memory of the process is limited to my notes, which you’re reading here. Sorry! As you can see, it worked well for me back in 2014, but it has been a long while since I’ve made it.

Use SoapCalc to get your final measurements of KOH, NaOH, and H2O, based on your batch size (I’d recommend not going smaller than 500g of oils as that starts to get tricky to blend, especially if your pot is quite large). Here’s how (we’ll assume you’re making a 1000g batch for this example):

Melt the oils together in a large (non-aluminum) heavy bottomed pot over medium heat.

Weigh out the water into a large, dishwasher safe jug.

Weigh out the KOH carefully into a small container. Weigh out the NaOH carefully into another small container. Add one type of lye to the water, swirling it gently to dissolve it. Once the first has dissolved, add the other and swirl to combine. The lye water will bubble and steam—avoid inhaling the emissions. Because both NaOH and KOH are strong bases they won’t react with one another, but you still shouldn’t inhale the gasses

Once the oils have melted, turn the heat down to low (2/10 or so) and add the lye water. No need to worry about matching temperatures here!

Get out your immersion blender and start blending to reach trace—this will take quite some time. After 20–30 minutes of stirring and blending, you will eventually end up with something the texture of pudding or applesauce. At this point, switch out the emulsion blender for a flexible spatula—we have achieved trace and are now cooking the paste.

Stir as the mixture continues to cook. There are a lot of cooking stages that you can apparently witness, but all I saw using this hot processed method was runny mashed potatoes to thick mashed potatoes to a less clumpy creamed butter like paste (no translucent vaseline stage here). With cream soap we are looking for a sort of lumpy/dry mashed potato stage after the creamed butter stage. Once you’re there, do a zap test to confirm it’s done (aka touch a small amount of the past [let it cool first!] to your tongue—it shouldn’t “zap”).

You’ll want to store most of the paste to dilute as needed—mason jars are great for that.

Stay tuned for a variety of recipes on turning this into whipped soap! 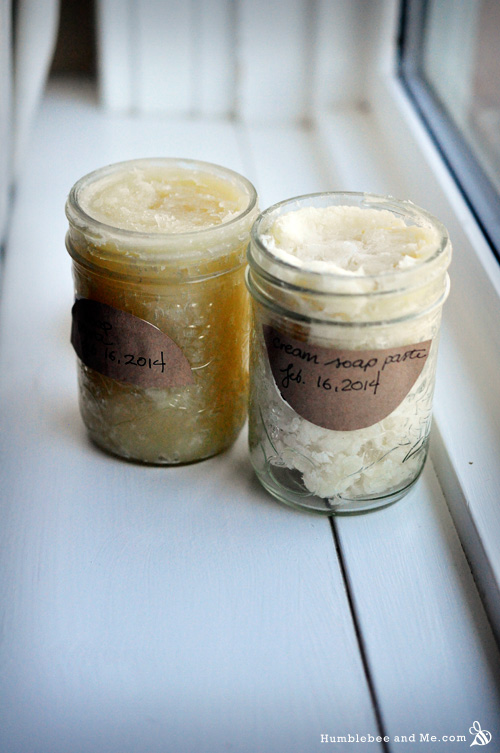