I was originally going to call this Fairy Bread Soap “confetti soap”, but as I made it I was reminded of Fairy Bread—a snack I saw my Aussie friends chow down on (when they weren’t devouring slices Vegemite toast) when I lived Down Under. For the uninitiated, Fairy Bread is white bread + butter + hundreds and thousands (aka sprinkles). It’s understandably popular with children for being all colourful and sweet, and I just loved how colourful and speckle-y this soap was as it came together, so here we are—Fairy Bread Soap!

This soap was born of a need to empty out my ever-filling box of soap scraps. These scraps are leftovers from trimming blocks of just-made soap and the mostly useless nubby slivers of nearly used-up bars thatI’ve been collecting them in an old ice cream bucket since I started making soap. I occasionally dip into them to make a tub scrub or for travelling, but my stash was continuing to grow and I wanted a good way to use it up in a seriously efficient manner. 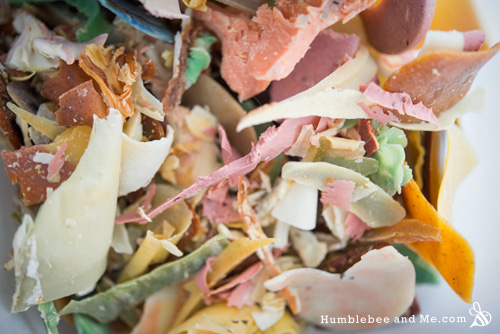 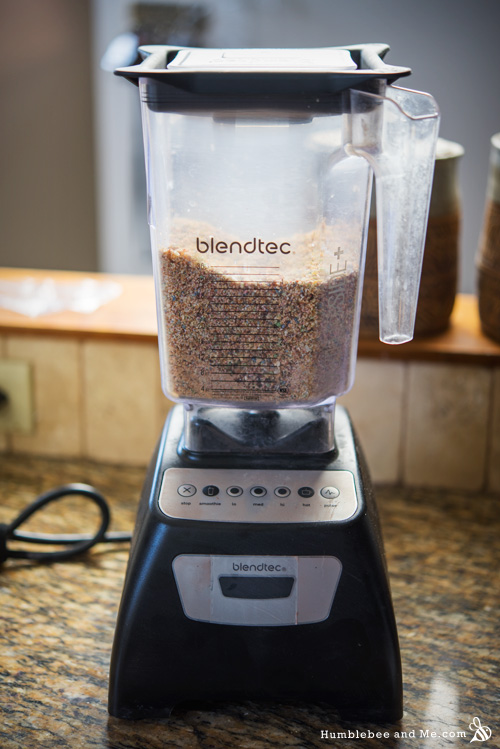 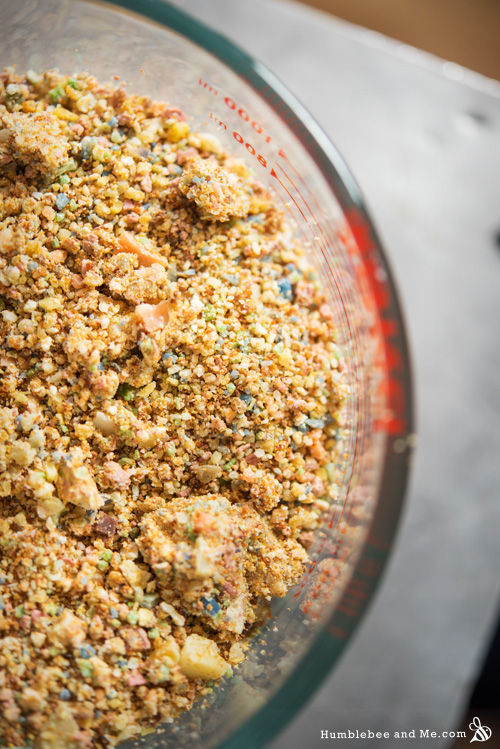 I started by tipping my scrap collection into my blender and blitzing everything into a chunky sprinkle-like rainbow powder (tip: go through and pick out any stray hairs that might be embedded in bits of used soap first—yuck!). If your blender isn’t very powerful, a foot processor with a chopping attachment might be a better option. 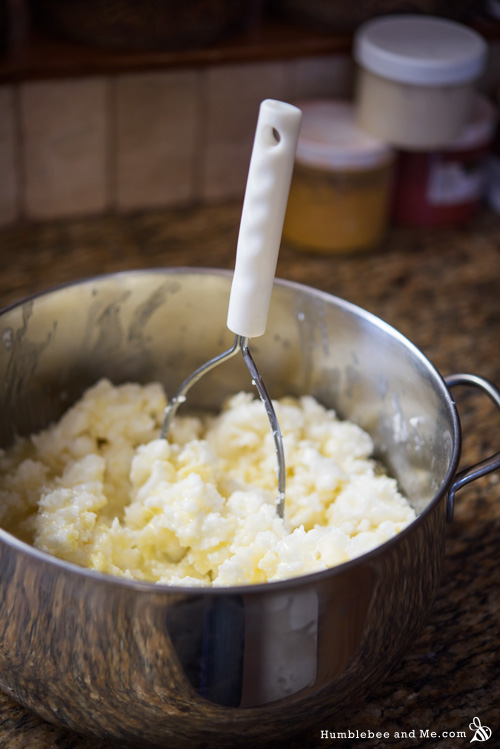 I decided to give totally room temperature soaping a go with this batch, so I mashed up my solid oils with a potato masher before adding the hot lye water. 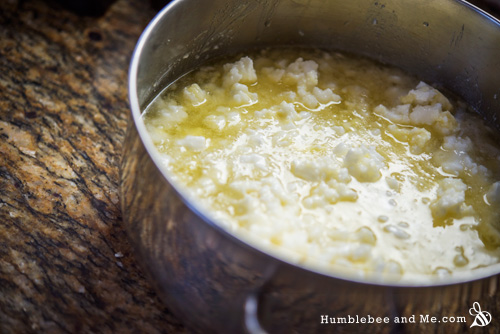 After adding the hot lye water to the fats. I found this soap is too heavy in solid fats for the lye water to easily melt them :/ 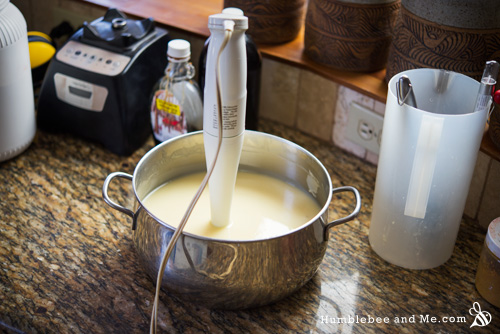 I needed to break out my [sv slug="immersion-blender"] to get the solid oils to incorporate, which had me pretty worried about getting a false trace.

Once I had all those bits of soap, all that was left was to suspend them in some new soap and turn the whole lot into a log of colourful sudsy goodness! I ended up with about four cups of soap bits, which I suspended in about as much soap batter, give or take (it ended up being a batch made with 725g [25.6oz] oils). I was aiming for half and half (ish) and I wouldn’t do less soap batter, but you could definitely do more. Mine was quite thick with soapy confetti bits and I’m not sure there would’ve been enough batter to bind everything together if I’d used less, but you can certainly use more if you want a less dense confetti type look. 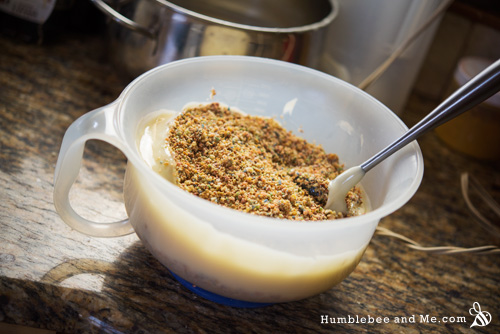 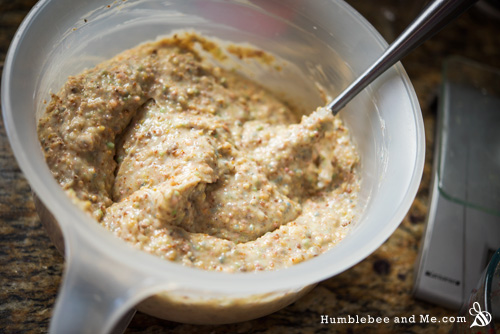 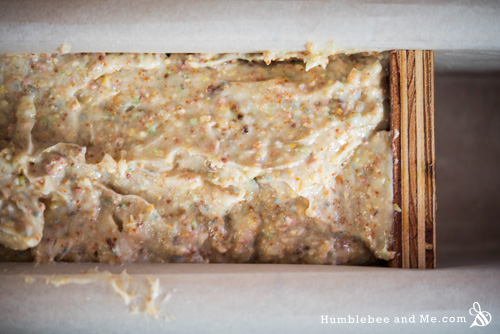 Unsure about how to use SoapCalc? I made a video to walk you through it!

Start off by popping your soap scraps into a blender or food processor fitted with a chopping blade and chop all the scraps up into soap sprinkles. Some of it will end up as dust, but the largest pieces should be pea-sized or smaller. Once you’ve got soap bits, measure them out so you know how much you’ve got. If you want to use some leftover soap bits to top the soap with, set a few spoonfuls aside now.

Now to decide how much fresh soap batter to make. If you want a ratio similar to the one I used, you’ll want about 180g (6.3oz) of fats for every cup of ground soap bits—I had just shy of four cups of soap bits and I used 725g (25.6oz) of fats to make up approximately 1100g (39oz) of batter (once the oils had been combined with the water and lye and brought to trace). I wouldn’t recommend making less, but you can definitely make more.

Up next; calculate out your recipe (unsure about how to use SoapCalc? I made a video to walk you through it!) for the amount of batter you’re making and follow standard soap making procedure to bring it to trace.

I used room temperature soaping for this batch, which I’ve discussed pretty thoroughly in this post. However, instead of creaming the oils, I just mashed them up a bit with a potato masher to break them up before adding the lye water. I found I wasn’t crazy about this method with this recipe as the lye water didn’t melt all the fats; I had to break out the immersion blender to get all the remaining solid bits to blend into the batter, which left me quite worried I’d end up with a false trace. So, if you want to room temperature soap this recipe I’d recommend melting the fats, making your lye water, and letting both parts come to room temperature over a couple hours before combining them rather than trying to use the hot lye water to melt your fats.

Once you’ve got a relatively thick trace (somewhere around pudding), blend in the clay, and then stir in the soap confetti. I found my batter thinned out a bit when I added the soap scraps, and since I wanted a fairly thick trace I ended up leaving it in the bowl, stirring it every five minutes or so, until it was thick enough to make a sort of sculpted top with (I think that took about twenty minutes).

When you’ve got everything blended together and the level of trace you want, all that’s left is to pour it into your mould and let it saponify! If you went for quite a thick trace I’d recommend rapping your mould sharply on your counter a few times to help knock out any air bubbles. I reserved a couple tablespoons of the ground up soap to decorate the top with, and I like how that turned out 🙂

After 24 hours of saponifying, slice the bars and let them age for at least three weeks before using. Enjoy! 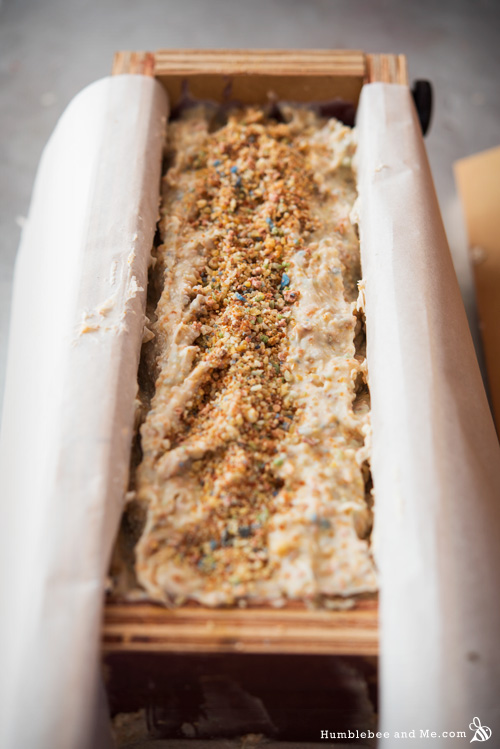 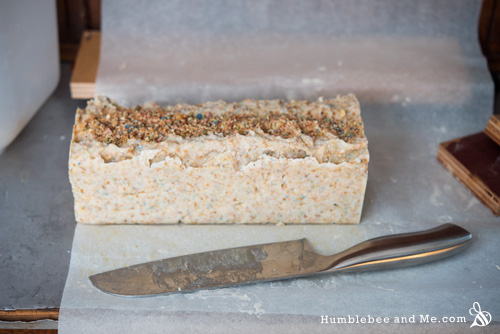 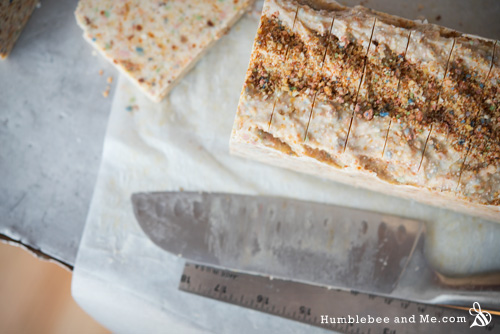 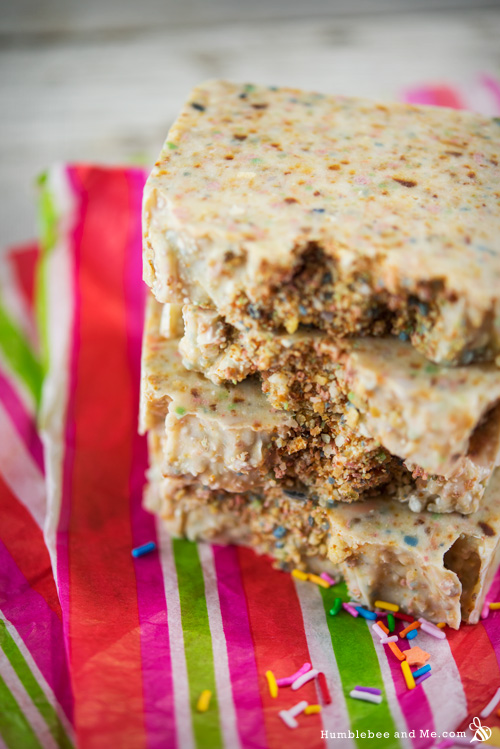 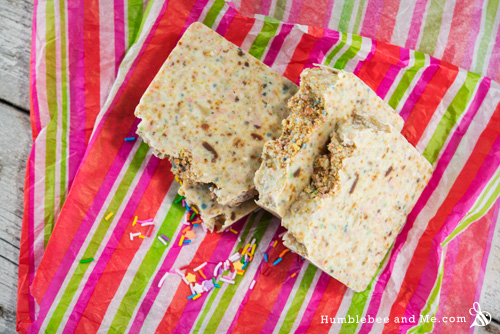