How to Make Liquid Soap (The Easy Way)

I am so excited to finally have liquid soap up here, and in my bathroom at home. Like many of you I’ve read about making my own liquid soap and though “Wow. That is a ridiculously involved process, and sounds way harder than bar soap… and maybe it’s just not worth the effort.” And who could blame us? The processes I found required hours of work and supervision, careful calculations that are different from bar soap, pH testing, neutralizing the final product with acid, and a lot of mess with a potato masher. Not this method. Nope. It’s not too good to be true, either—I promise. Let’s learn how to make liquid soap the easy way! 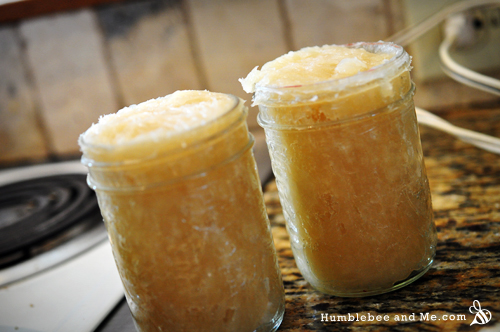 The primary difference between liquid soap and bar soap is the type of lye you use to convert the oils into soap. Bar soap uses sodium hydroxide. Liquid soap uses potassium hydroxide. After that, everything seems to change—or so I thought, from my reading. But then I met Colleen, and we had a DIY date. She has more soaping experience, and I seem to be more cosmetics inclined. She’d made lots of liquid soap, and promised to walk me through it after I confessed I’d never tried it thanks to how crazy complicated it sounded. She promised me my sources were over-complicating things, and she was right. And, best of all, we managed to simplify things even more. 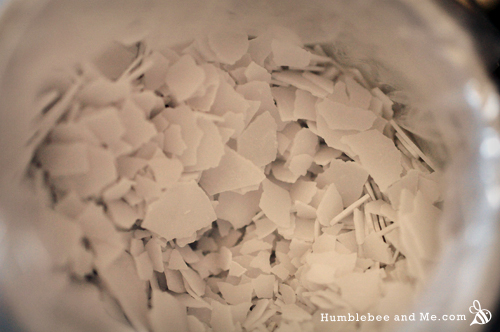 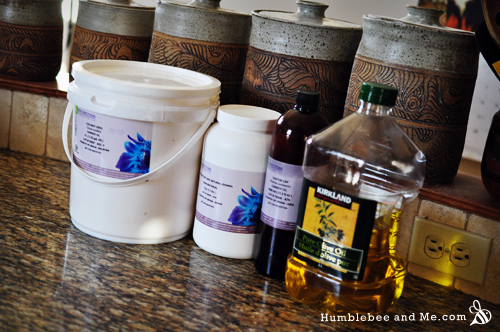 We started off by using almost all the same ingredients as my all-in-one bar. The only ingredient that was ditched was the beef tallow (no need for a hardening fat here) and the clay (to start with, at least). And we calculated it the same way as you’d run the bar soap through SoapCalc, only selecting KOH instead of NaOH, complete with a 5% superfat. So far, so good. 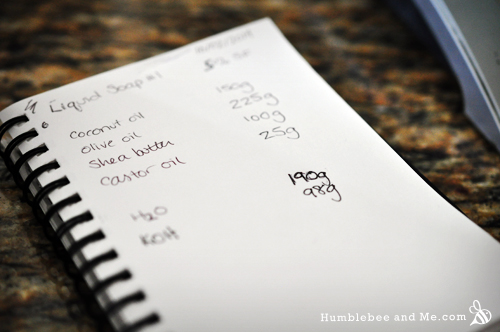 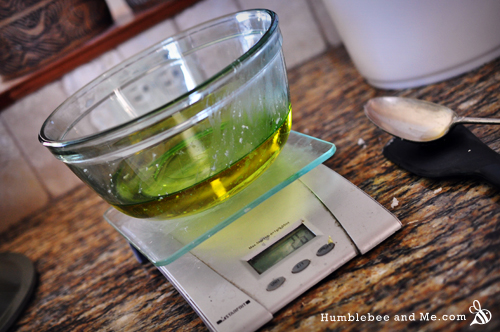 Up next was putting the oils in my big soaping pot and melting them over medium heat. While that happened, we measured out the water and added the carefully weighed out KOH flakes. KOH dissolves much more easily than NaOH, so the jug only needed some swirling the get it to dissolve. KOH also reacts much more enthusiastically with the water, making boiling water noises and letting off steam quite quickly. As usual, don’t touch it/get it on your skin, and if you do, rinse it off. Also, don’t inhale the gasses that come out of the jug, and do this in a well ventilated area. 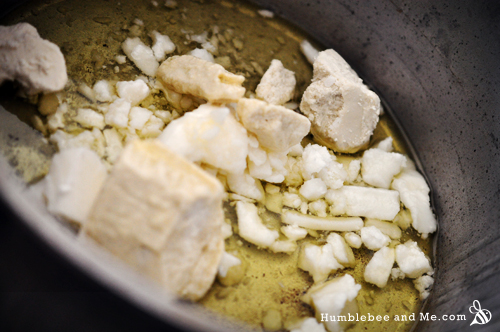 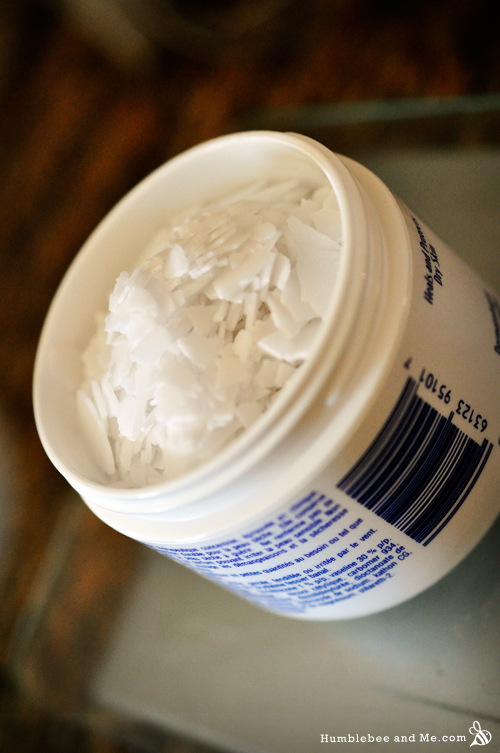 Once the oils had melted, in went the KOH solution. The pot was still on the stove, but we turned the temperature down to about 2/10. Now to get the mixture to trace. It will not want to. KOH is like a stubborn toddler that way. You will need an immersion blender and quite a lot of patience. (My immersion blender is a Braun one and it’s been going strong for a good five years of soaping now—cheaper ones may burn out with extended blending of such thick stuff as soap paste.) 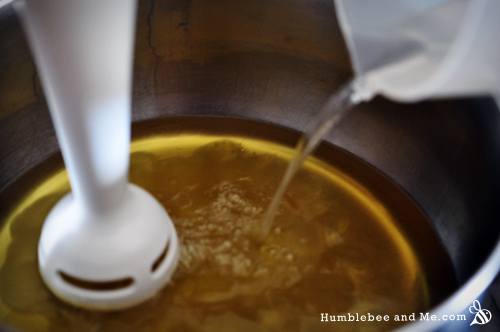 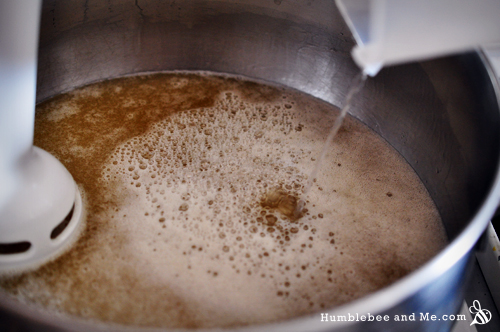 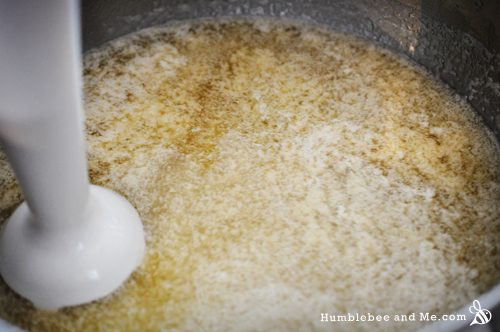 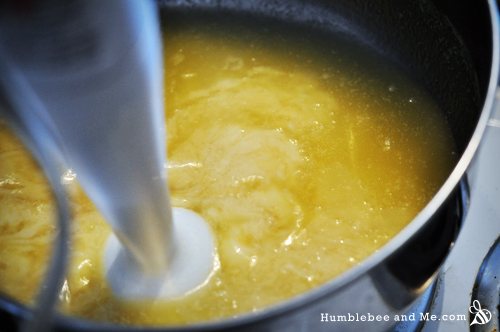 The mixture will look like curdled milk at first, with little wispy clumps of paler stuff floating in the oil. No worries, you’re right on track. Get your immersion blender and start blending. Be careful not to splatter the mixture. We started with a small batch (made from 500g of oils), and that didn’t quite submerge the blender head, so we tilted the pot a bit to create a “deep end” from which to blend. 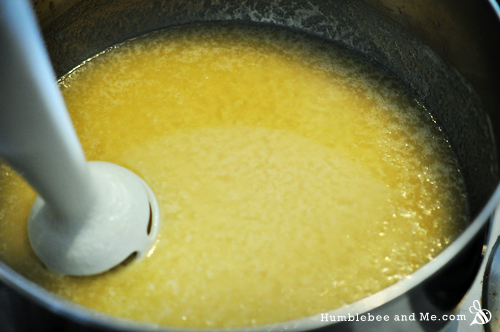 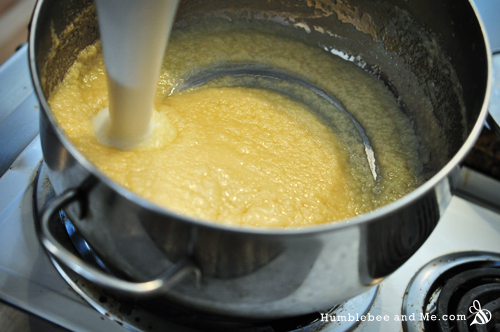 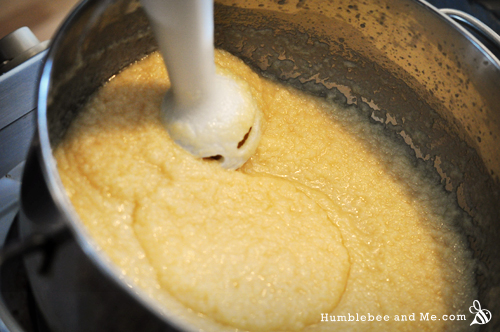 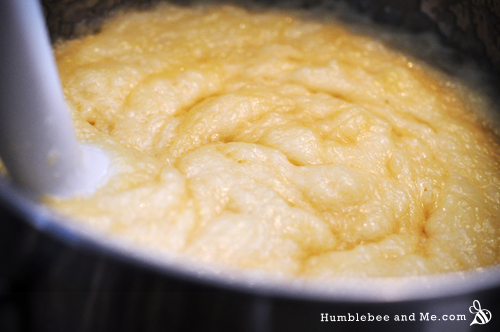 And blend. And blend. And stir. And blend some more. It’s going to take a while (20–30 minutes is not abnormal). You will eventually get to something that sort of looks like creamy pudding or applesauce—ours was never quite pudding-like, just applesaucey. At this point it’s best to swap the blender for a sturdy spatula (I like spatulas like these ones, where the head can’t pop off the handle so you don’t have to go chasing after it if it pops off, which definitely happens when stirring and mashing something this thick), as the mixture will start to thicken, and you’ll end up with unevenly cooked soap paste packed into the blade tent on your immersion blender. 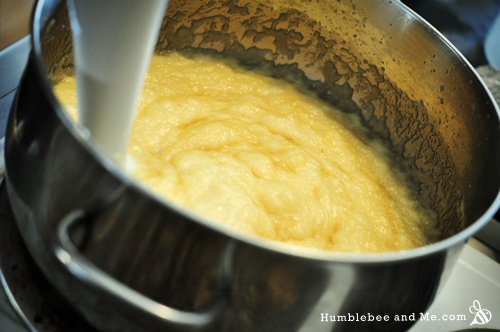 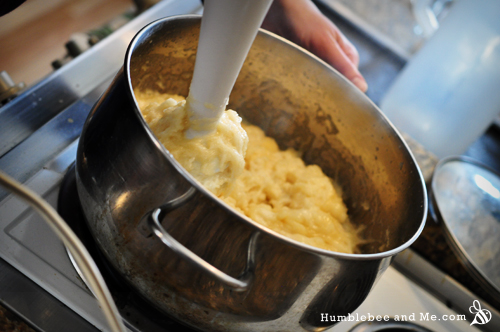 You should switch to a spatula at this point. 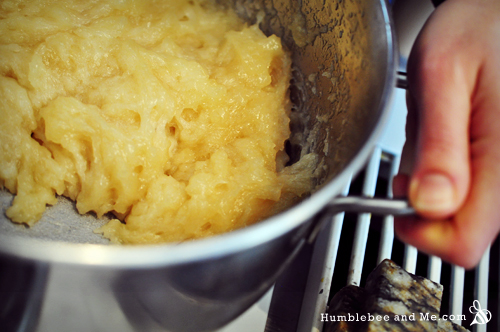 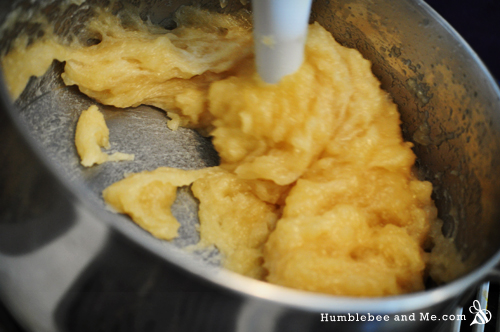 And now we stir! We are basically hot-processing the liquid soap paste and speeding things along, even as compared to the crock pot method. As you stir the mixture will thicken and start to pull away from the pot, going from something that’s like runny mashed potatoes to something like very thick mashed potatoes. Keep stirring. You’ll eventually get to a sort of semi-translucent Vaseline-like point (it took us about 15 minutes to get there from initial trace). That’s where you’re done(ish)! Sweet! 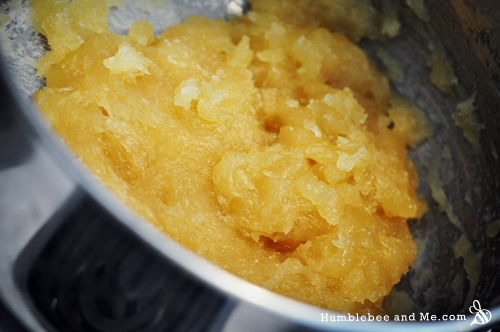 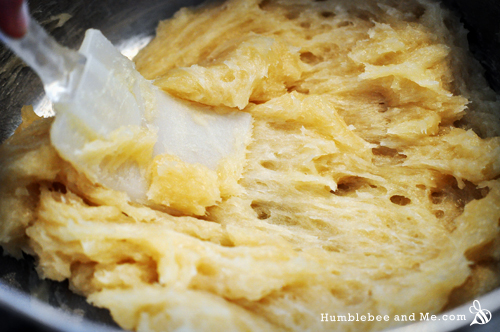 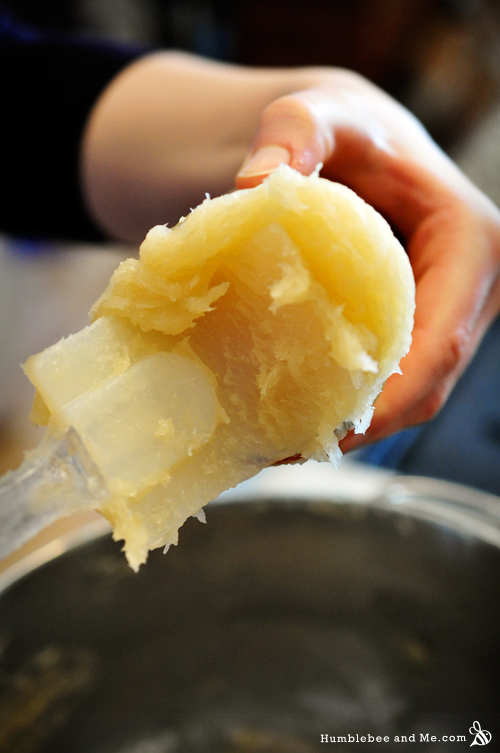 So, now you’ve got a paste. Before you can use it, you’ll need to dilute it. However, you don’t want to dilute it all right away, because once you add the water the clock is on for the life of the soap. Instead, pack most of it away. I filled two 250mL/1 cup wide-mouthed mason jars with soap paste, labelled them, and put them away with the rest of my soap bars. I saved the rest to dilute for immediate use.

Traditional dilution generally involves a potato masher and a lot of frustration. I am boycotting that method. For my method, you will need lots of time, but it’s almost entirely downtime. Basically, you soak the paste in some water in a sealed leftovers container for a day or so, mashing a bit as you go (a fork works brilliantly here). I find it’s best to think of it as “softening” rather than “diluting”. You basically just leave the paste in a sealed container with some water, and it absorbs it. As it does this, the soap becomes softer.

And that’s it—liquid soap! Add essential oils as desired (major bonus—you need FAR less than you need for cold processed, and because you’re adding them at room temperature they retain their strength).

At this point you can leave your liquid soap somewhere cool and dark to let any particulates settle out, but I can’t really be fussed with that, and I use mine straight away. Is my soap crystal clear? Nope. But did I make liquid soap that is totally usable in less than a day? Yup! Cool, eh?

2019 update: I’m afraid I can’t offer much in the way of detailed troubleshooting information for this project as I haven’t made liquid soap using KOH in well over 3 years and my memory of the process is limited to my notes, which you’re reading here. Sorry!

Use SoapCalc to get your final measurements of KOH and H2O, based on your batch size (I’d recommend not going smaller than 500g of oils as that starts to get tricky to blend, especially if your pot is quite large). Be sure to check the “90% KOH” box to prevent too much of a superfat—most KOH is only 90% pure, so checking that box accounts for that in the calculations.

Melt the oils together in a large (non-aluminum) heavy bottomed pot over medium heat.

Weigh out the water into a large, dishwasher safe jug.

Weigh out the KOH carefully into a small container and add it to the water, swirling it gently to dissolve the flakes. It will bubble and steam—avoid inhaling the emissions.

Once the oils have melted, turn the heat down to low (2/10 or so) and add the lye water.

Get out your immersion blender and start blending to reach trace—this will take quite some time. After 20–30 minutes of stirring and blending, you will eventually end up with something the texture of pudding or applesauce. At this point, switch out the emulsion blender for a flexible, sturdy silicone spatula—we have achieved trace and are now cooking the paste.

Stir as the mixture continues to cook. There are a lot of cooking stages that you can apparently witness, but all I saw using this hot processed method was runny mashed potatoes to thick mashed potatoes to translucent vaseline like paste. Once you reach the translucent paste stage you’re done—do a zap test to confirm (aka touch a small amount of the past [let it cool first!] to your tongue—it shouldn’t “zap”).

You’ll want to store most of the paste to dilute as needed—mason jars are great for that.

To dilute, start with a 1:0.6 ratio of paste to water by weight (eg. 100g soap paste, 60g water—you’ll always want to be using more soap paste than water unless you like your liquid soap very firmly on the liquid side of things). I used tap water. Place the paste and water (just-boiled is best) together in a leftovers container with a sealing lid. Mash it a wee bit (use a fork rather than a spatula to avoid splurting), and then seal it and leave it. Overnight is a good starting point. The next morning, mash it about a bit and try to break up the blobs of soap paste. Re-heat the mixture a bit, re-seal, and let it sit some more. Continue this until you have a homogenous mixture. Yes, it takes a while, but at least it’s almost entirely downtime.

Now you can add your essential oils—a major bonus of liquid soap is that you’ll need far less essential oil to get the scent you want because they don’t have to live through saponification or aging. Score!

Transfer to a pump-top container (these blue glass ones are super pretty, while the Human Gear GoToobs are fantastic for travel) and voila, soap!

If you like your soap thicker than it ended up being, you can sprinkle in a bit of guar gum or xantham gum to thicken it up to your preference, and then adjust your water amounts next time. Whoops. You can also just add some more soap paste and let that dissolve, but I find that second soap paste addition takes quite a lot longer to dissolve than the first one—days instead of hours.