This brand new Lemon Rose Creamy Body Wash has me seriously excited to take showers. It’s been years since I used a body wash—my shower has been strictly soap since 2011, and I love soap… but I also love trying new things. I especially love trying new things that are awesome! This creamy body wash works up into an utterly lovey, lace-like lather that I just can’t get enough of. I’ll drizzle some on a loofah, work it up into a cloud of bubbles, and go to town. Swoon. 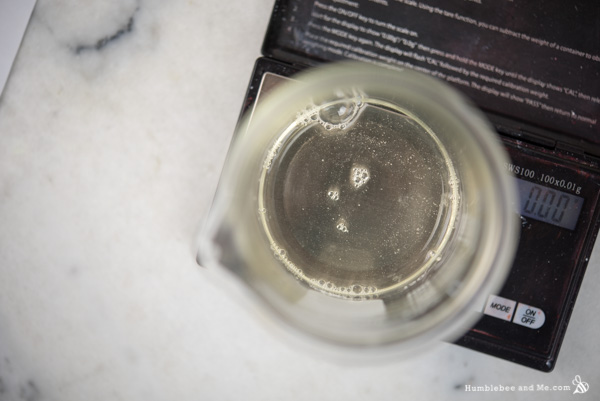 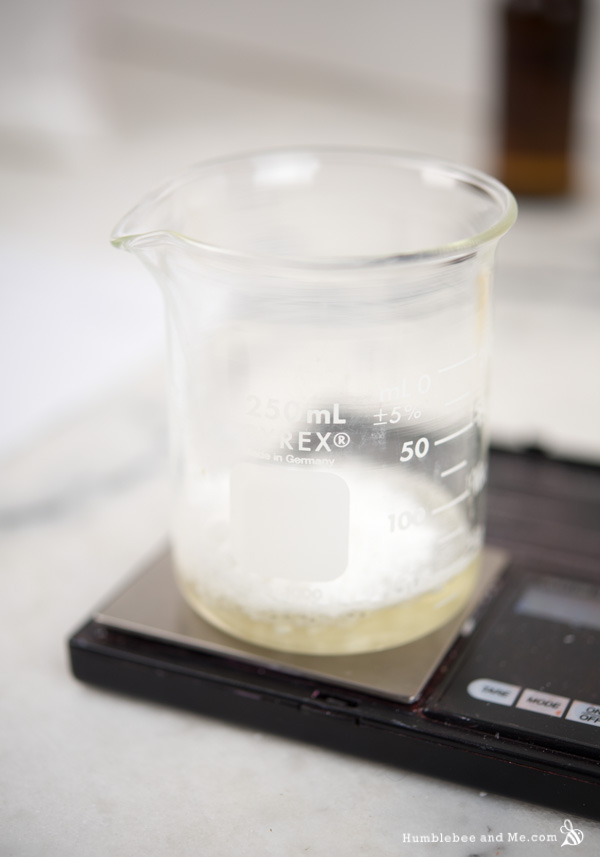 Anyhow, I digress. Surfactants mean you can have lather in anything—you can add surfactants to lotions, scrubs, masks, and bath bombs, which is all rather exciting. You can also make bars and liquidy concoctions from surfactants (both solid and liquid) that act just ike bar soap or liquid soap, but aren’t. Unlike bar soap, it needs very little aging time (and no lye), and unlike liquid soap, it’s pretty simple to make and get what you want in terms of consistency. Surfactant powered washes also have lower pHs than soap, meaning surfactant shampoos don’t have to be followed up with an acidic rinse to pH correct your hair, and in general, surfactant powered washes are much closer to the pH of our skin (5.5). So, if you have sensitive skin, you may find surfactant powered washes make your skin happier than true soap. 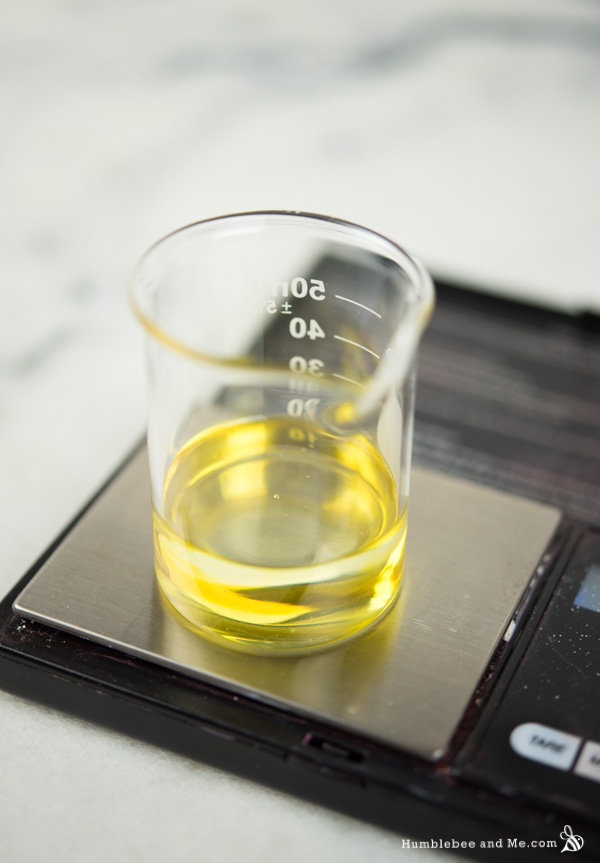 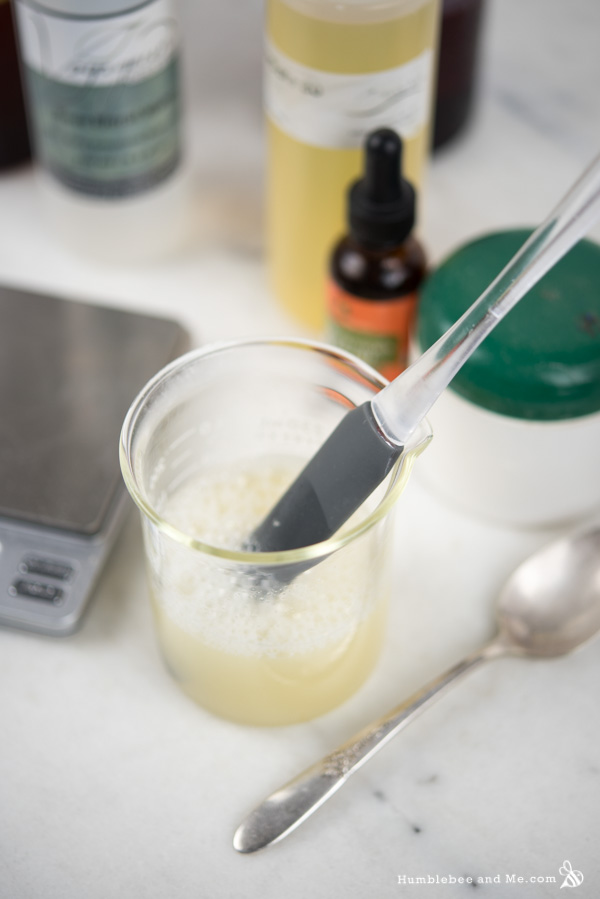 When it comes to the “natural” question, well… I’ve written a lot about that. Surfactants are not something you can get from stepping on an olive or hitting a coconut with a hammer (but then again, neither is sodium hydroxide). Some are derived from coconuts or corn, some are derived from petroleum products. Some are notoriously irritating (SLS is famous for this—it also makes me break out!), and some are more gentle than soap (all “no tears” washes for kids and babies are made with surfactants). All this is to say that not all surfactants are equal, and concentration is important. I’m choosing gentler ones and easing into working with them, and I’m having a lot of fun with it. 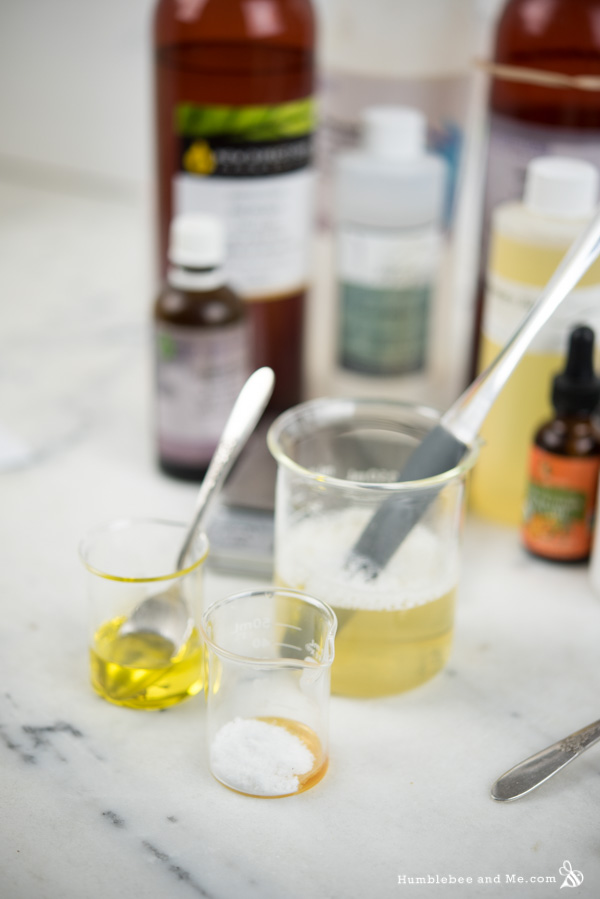 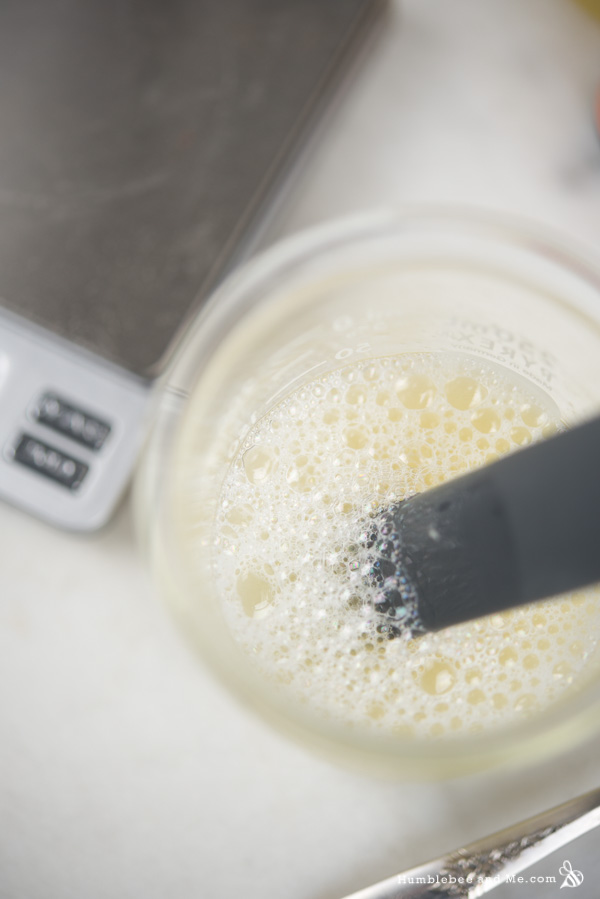 This project started as a recipe request, but no longer bears any resemblance to the requested product. The use is the same… but that’s about it. The request was for a homemade version of a cleansing shower “oil”. I say “oil” because it was a cleansing oil only in name; it was predominantly water and surfactants. That’s not a bad thing, it’s just not a cleansing oil! Judging by the photos, the consistency was fairly close to that of a liquid oil, so perhaps that’s where the name came from. There was a nice selection of oils in the product, but they all came after the preservative and fragrance in the ingredients list, and since we know those ingredients are typically used at 1% or less, then we can relatively safely say there was less than 1% of each of the oils. There were six different carrier oils, so we could be looking at a total around 5%, but given the product was transparent, I rather doubt it (my recipe has 5% oils in it and it’s far from clear!). 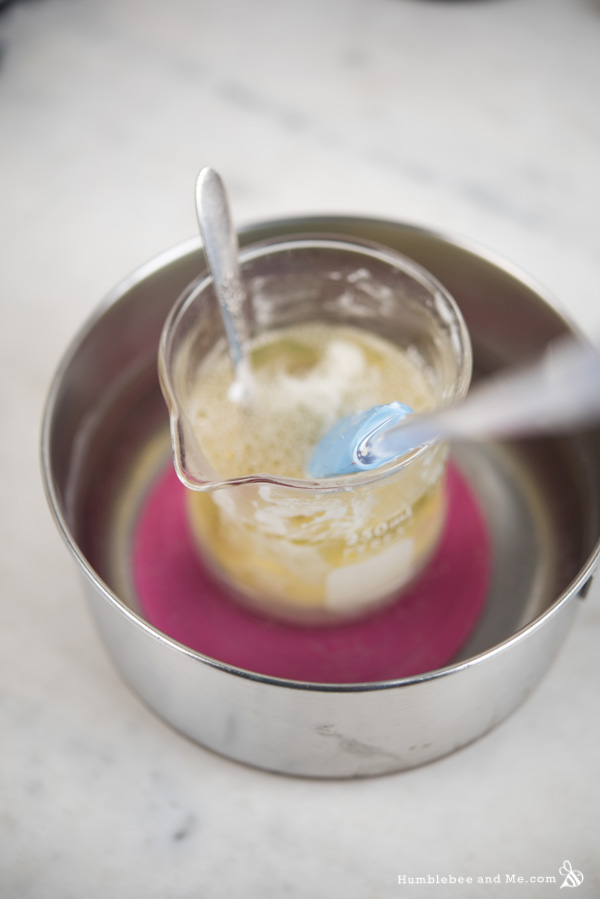 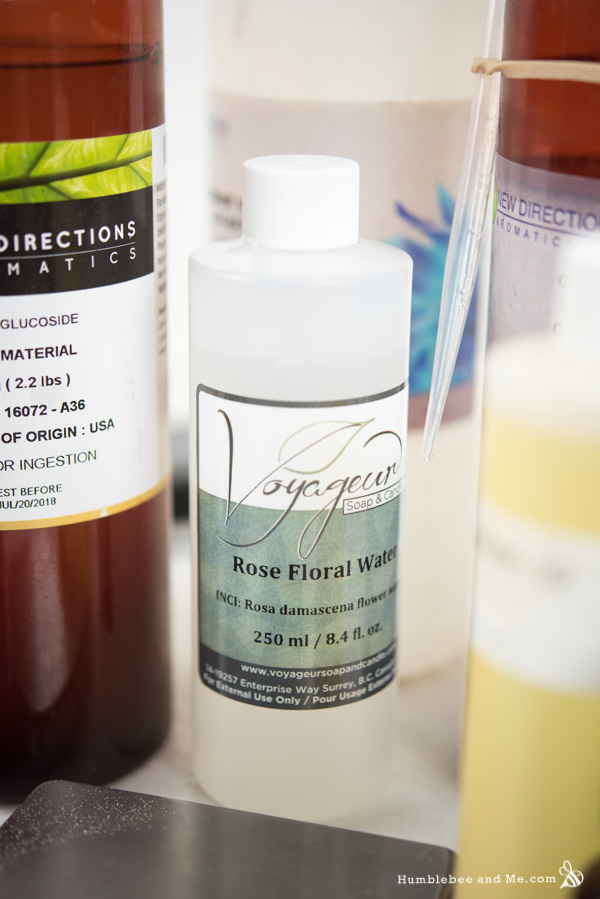 Anyhow, I began by creating a surfactant blend from three relatively common (and gentle) surfactants I’ve got in my collection: SCI (Sodium Cocoyl Isethionate), Cocamidopropyl betaine, and Coco Glucoside. SCI is a solid powder, while the other two are liquids. Ampohosol CG dissolves the SCI, which is fairly stubborn in that regard, and the two together make a very lovely, mild, creamy lathery mixture. I added coco glucoside as it is another mild cleanser, but you could use another liquid surfactant instead, or just use more Cocamidopropyl Betaine. Making changes to the blend will impact the viscosity and the lather, but it’ll still work (exactly how those things are impacted is obviously dependent on what swaps you make!). 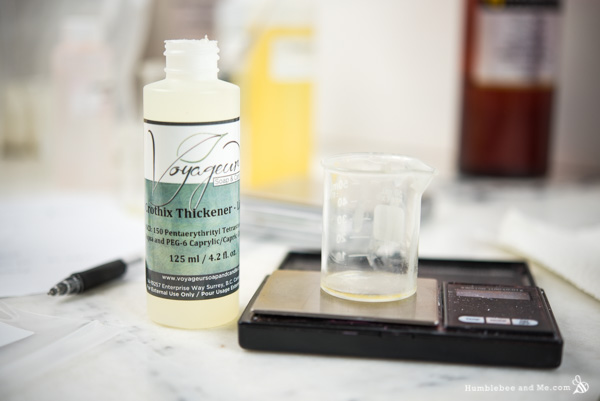 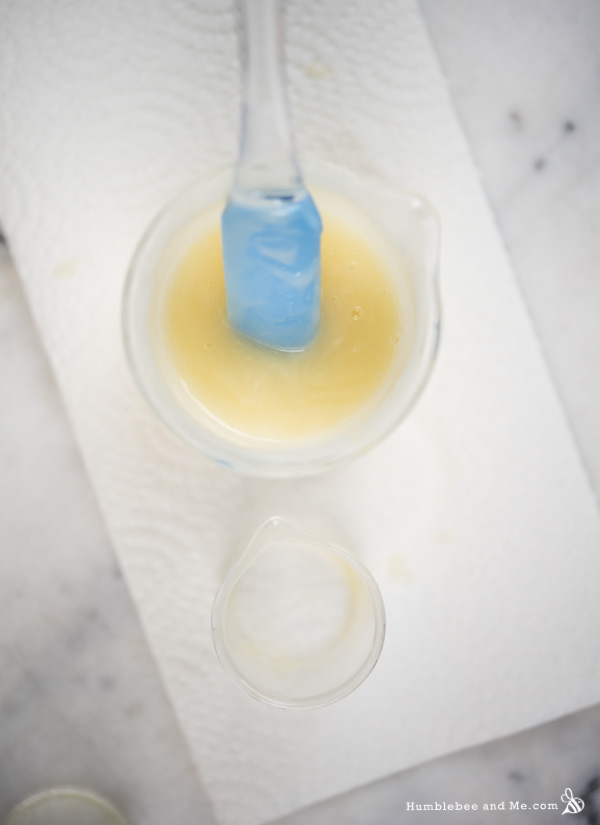 I dissolved our surfactant blend into a mixture of water and rose hydrosol. I recently got a bottle of true rose hydrosol from Voyaguer and (imagine George Takei): ooooooooh myyyyyyyy. It puts the stuff from the grocery store to shame, and not just any level of shame. The kind of shameful look your dog gives you when you get home after it ate your throw pillows kind of shame. Real rose hydrosol is so richly scented and downright decadent that I’m embarrassed I ever thought the other stuff was ok. I mean… it is ok. If that’s all you can get. But if you can get the real stuff, do yourself a favour and order a bottle. It’s freaking incredible. 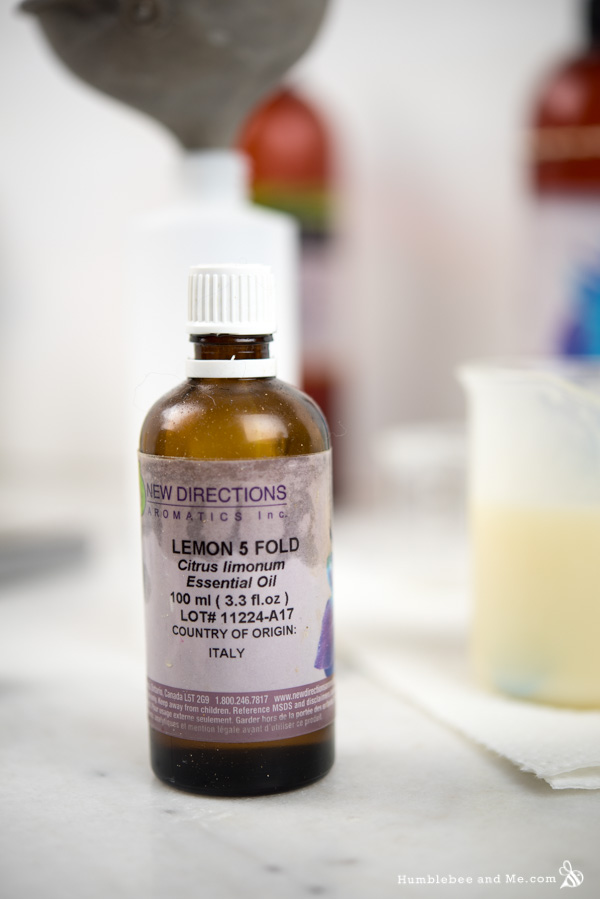 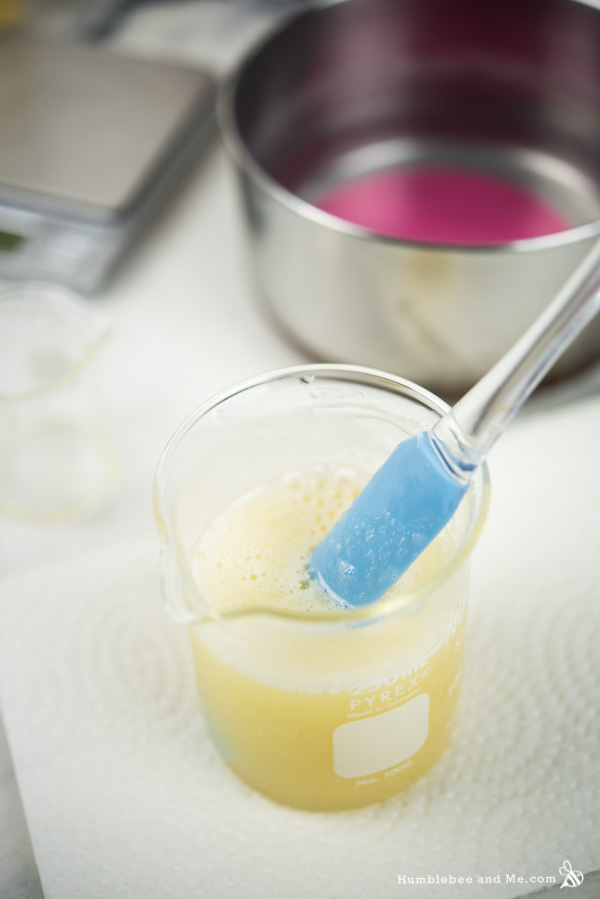 I also included some other goodies; some nourishing hydrolyzed silk, hydrating panthenol and some bright lemon essential oil make this really quite special. I also blended some lightweight grapeseed oil with some polysorbate 80 to emulsify it into the concoction. The “original” had a blend of grapeseed oil, apricot kernel oil, avocado oil, olive oil, coconut oil, and kukuinut oil, so you can definitely feel free to use any of those—I was going to use kuikuinut, but I couldn’t get the bottle open, so I switched to grapeseed 😝 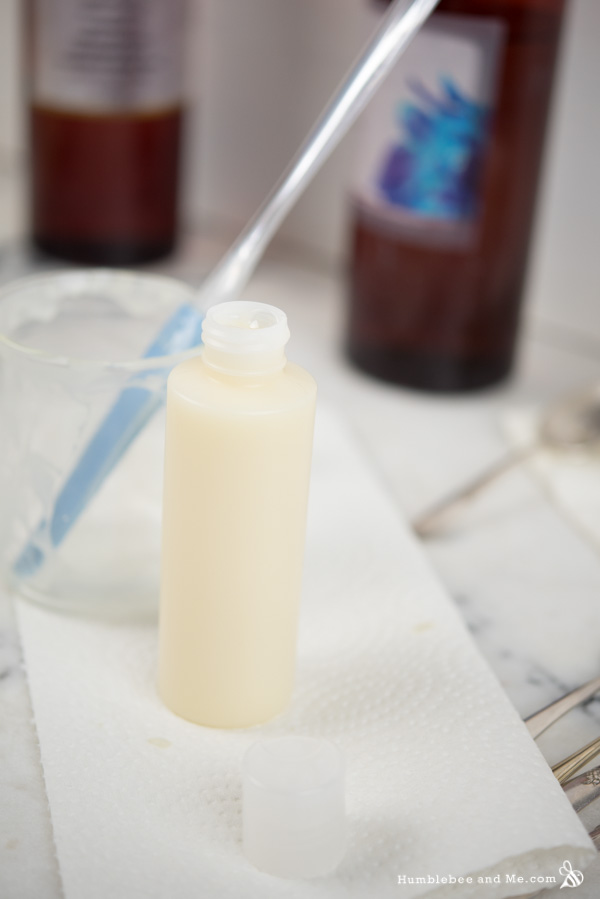 The final cleanser is thick and creamy (and you can easily customize the thickness with crothix), and smells wonderfully of lemon and roses (a thing that’s hard/expensive to do without fragrance oils in bar soap). I love mine in a squeezy bottle, and I can’t get enough of shower time these days. I know some of the ingredients in this one are a bit odd, but you’ll be seeing more of them as I continue to play and learn in this Lemon Rose Creamy Body Wash is amazeballs. Try it—please.

Weigh the SCI and Cocamidopropyl Betaine into a small heat-resistant glass measuring cup or beaker. Place the measuring cup in your prepared water bath to melt everything through—this will take at least an hour. It’s not done until you have a thick, uniform, white paste.

Once the SCI mixture is uniform, add the water mixture, and heat through until the SCI paste dissolves into the water mixture. This will also take a while; I covered my beaker with a piece of cling film to reduce water loss as it was taking so long. Periodically stir and mash the paste around, and you will slowly notice it start to vanish into the liquid.

When all of that is uniform, remove it from the heat and stir in the polysorbate 80/grapeseed oil mixture—the whole mixture will opacify and turn cream at this point. Let it cool until the outside of the beaker is only warm to the touch, and then stir in the silk mixture. You can now stir in your essential oil; I started at 20 drops and worked my way up to 40. You may find you like more! Play it by nose 🙂

Now you want to let the body wash well and truly cool; cover it and give it an hour or two (or even overnight), until it is properly room temperature. At this point, asses the consistency and decide if you’d like it to be thicker. Thanks to the SCI and emulsified oils it should be fairly thick to start, but if you want it to be thicker, stir in some crothix. I included 1g, which is roughly 0.5% (I formulated the recipe around including 1% crothix, but decided I didn’t need it, so technically the recipe totals 99.5% as I made it, which shifts all the percent values… though fairly insignificantly!).

At this point you’re ready to bottle it up and wash away! I used a 240mL/8oz squeezy bottle, but a pump top bottle would also work. Enjoy!

The pH of this body wash is ~5; my pH strips aren’t hugely precise, but it’s definitely somewhere around 5.

Before you ask if this can be made without surfactants… well, no. It can’t. You can kind of do the same thing by softening some liquid soap paste and adding the same essential oils and additives, but that obviously won’t be the same thing. It’s sort of like the difference between bread and gluten free bread. They may look the same and be used for the same things, but they definitely aren’t the same! 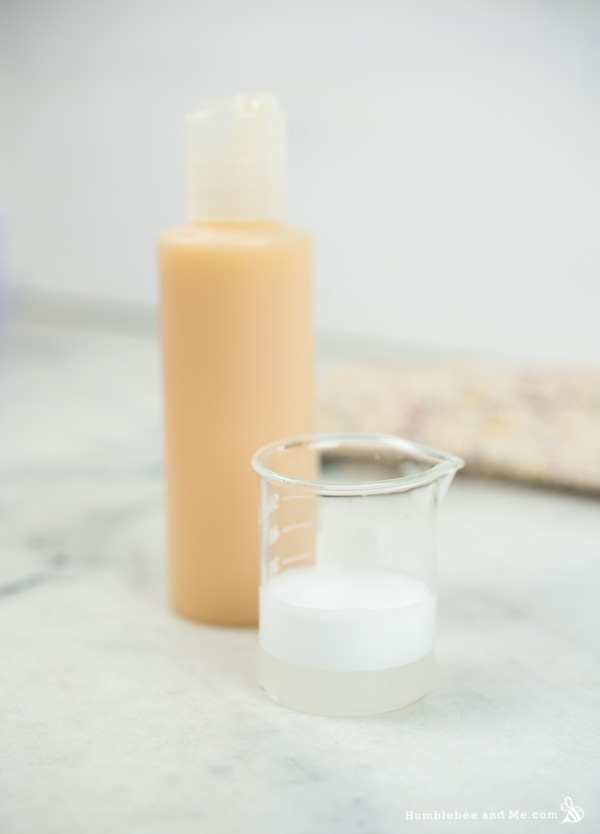 Look at that lather! That’s about three drops of the wash in ~20mL of water, blended up with a milk frother. 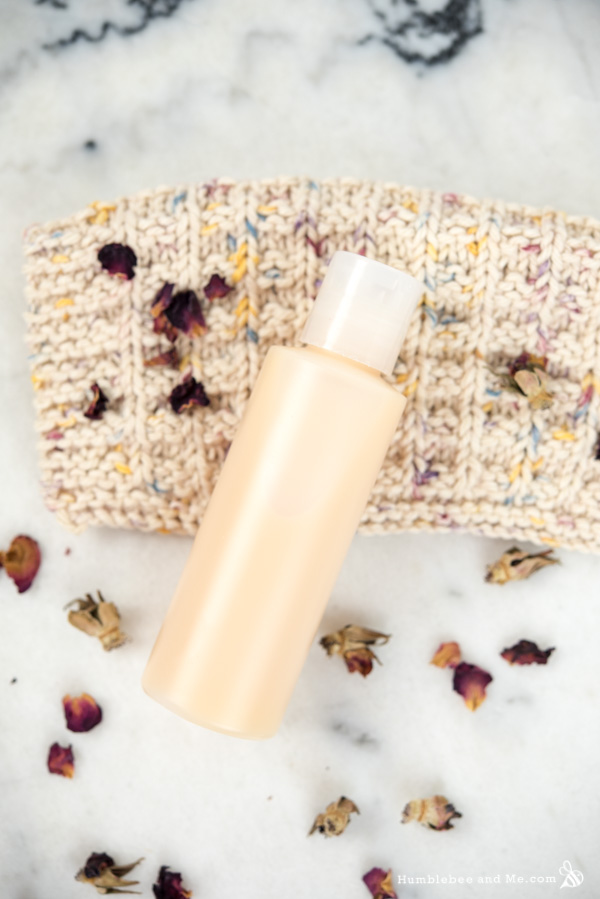