Soaps starring cedarwood and mint seem to be perennially popular; I think I see a few at every farmer’s market and craft fair I attend. And honestly, it’s not hard to see why! The scent combination is fantastic—soft, sweet cedarwood pairs beautifully with bright, punchy peppermint for a wonderful olfactory experience that’s pretty darn universal. I decided to veer a bit off the beaten cedarwood-mint path with my styling, though. Many of the bars I see using this scent combo really embrace dark browns and forest greens, but I was feeling a bit… perkier. Let’s make some Minty Forest Soap!

As you can probably guess from looking at it, I used three different colours of batter to create these bars. Most of it is unpigmented (minus some white kaolin clay, which really doesn’t do much of anything in the colour department), and then we’ve got some bright blue and rich green. I was inspired by some beautiful bars I found on Pinterest (check out my Soap Inspiration board to see the inspiration bars and more!). There was no associated tutorial with the image, so I just guessed on how to get the effect from what the final bars looked like. 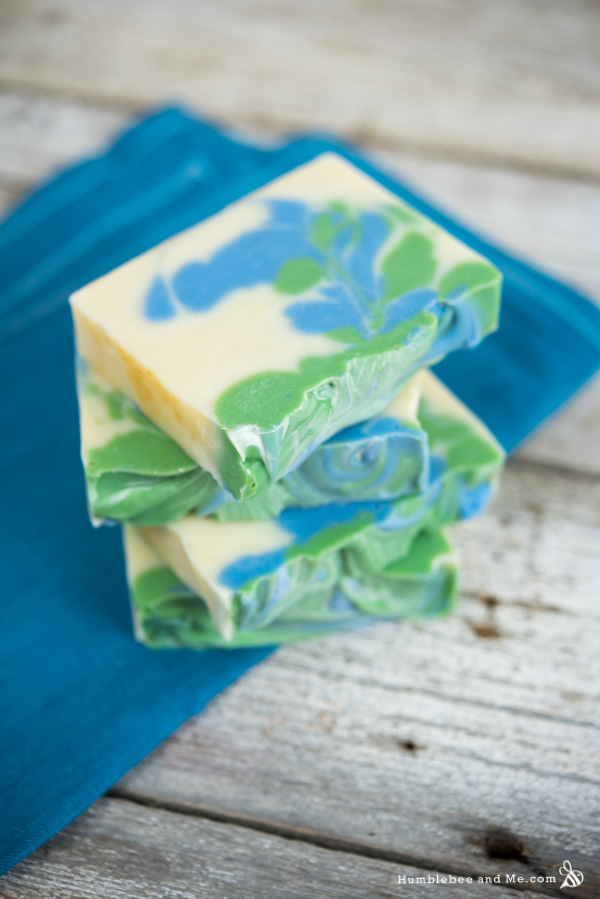 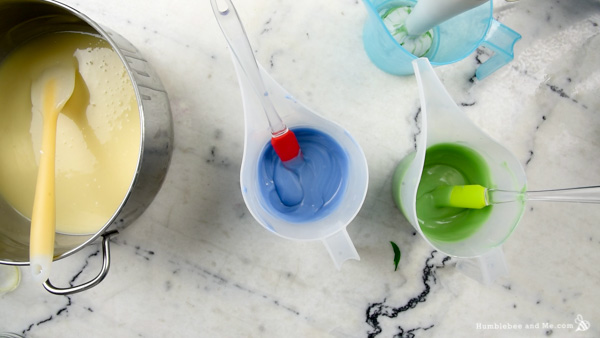 You’ll definitely get a better idea of how to pour the bars if you watch the video, but the general gist of it is that we’re doing layers and a hanger swirl, but only on about 1/3 of the mould (lengthwise). I used a Nite Ize Gear Tie to do my hanger swirl (perhaps I should re-name the swirl?), and honestly, I’ll never use hangers again. The gear ties come in a variety of gauges, they’re covered in rubber so they clean off beautifully, and they’re much more malleable than a hanger. I formed mine into an angled loop, which wouldn’t taken a lot of muscle and some pliers with a wire hanger. 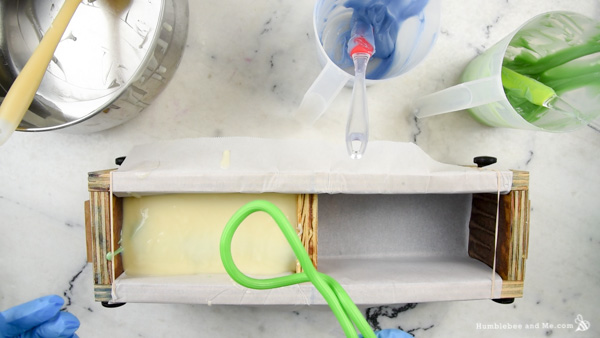 The gear tie, ready for action! 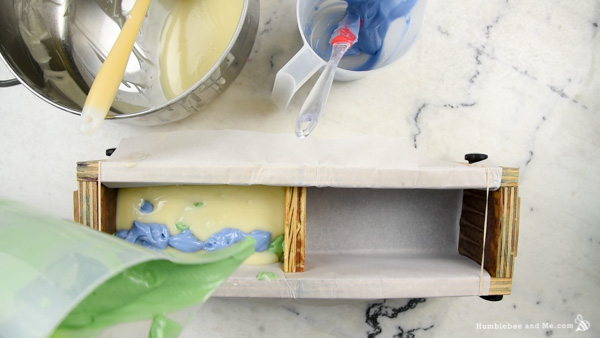 Once I cut the bars I could see that I definitely made/used too much coloured batter for the effect I was going for. I did 20/20/60 (which is reflected in the recipe) but next time I’ll probably try 10/10/80 and a thinner trace to see if I can get something closer to what I was aiming for. Live and learn! I still really like these bars, even if the swirly colour bits are a bigger part of the bars than I was hoping for. 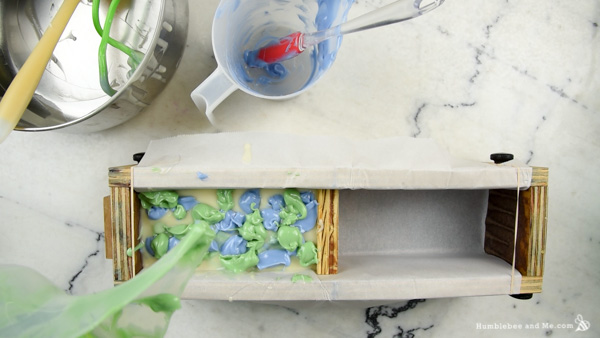 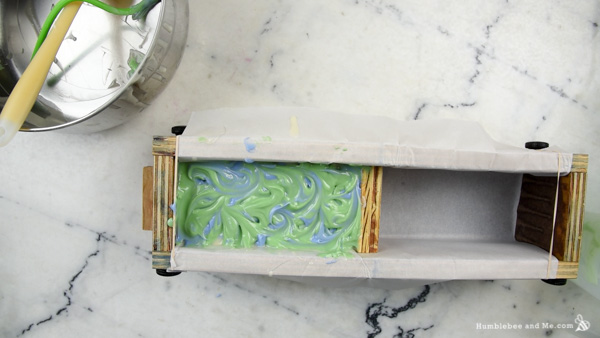 Also, I’m not quite sure how this happened, but these bars (and the lovely lemon basil ones that were made with them) were the first new batches of soap I made since bringing Lottie home. She’s now nine months old (!) and she’s been home with me for about seven and a half months (don’t worry, it only took 6½ to get back to the soap making). This is definitely a bit of a non-sequitur, but it was something that occurred to me as I was making these bars, so I thought I’d share. 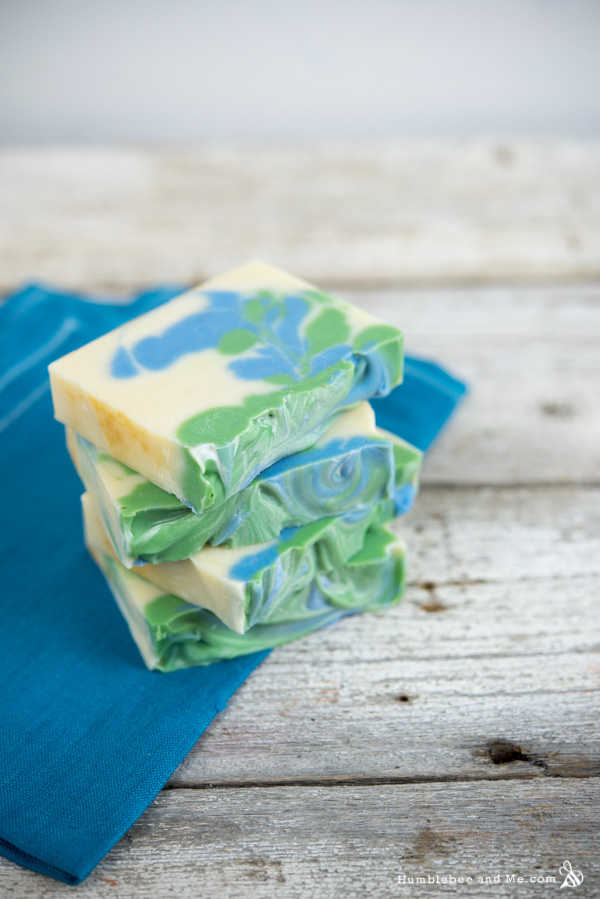 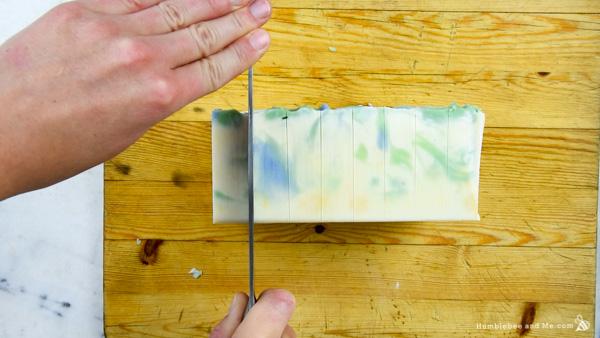 If you’re a somewhat experienced cold processed soap maker and you enjoy fresh, clean, slightly earthy scents, I think you’ll really love these bars! There’s nothing terribly tricky about making them, you just want to be at the soaping level where you’re comfortable working with batter since we’re doing a fair bit of that. Now—let’s make some Minty Forest Soap!

Prepare your mould—you’ll want a loaf mould for this soap. Melt your oils together in your soaping pot, and have two containers with pouring spouts handy (I use these awesome funnel pitchers). Let your oils cool to room temperature. Mix up your lye water (I used a 1L mason jar, giving me an easy cover for the cooling time) and let that cool to room temperature as well (you can use ice for part of your water to speed up the cooling process).

While everything is cooling, weigh out your essential oils, and measure out the clay. Whisk the pigments into a bit of extra olive oil until smooth; I used about 1/4 tsp blue ultramarine in one bowl, and 1/4 tsp green with a wee touch of blue in the other.

Once the melted fats and lye water are at room temperature, follow standard soap making procedure to bring them to trace. Once you have a relatively thin trace, blend in the essential oils and kaolin clay.

Now it’s time to divide up our batter! Weigh about 20% of it into one pitcher, 20% into the other, and then leave the remaining 60% in the pot. Colour one pitcher blue, and the other green, using your pre-dispersed pigments.

Pour a full layer of the white batter, and then one row of each green and blue along one long edge of the mould. Repeat this process until you’re out of white. Use up the remaining green and blue batter by dolloping it on the top of the soap and then swirling it together. Leave to saponify for 24–48 hours. Remove from the mould and slice,  and then leave to age for at least three weeks before using. Enjoy! 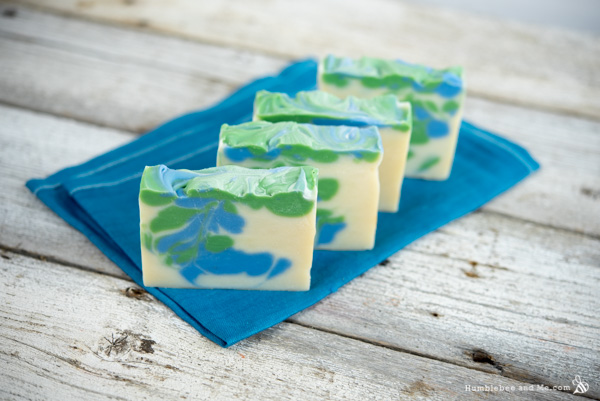 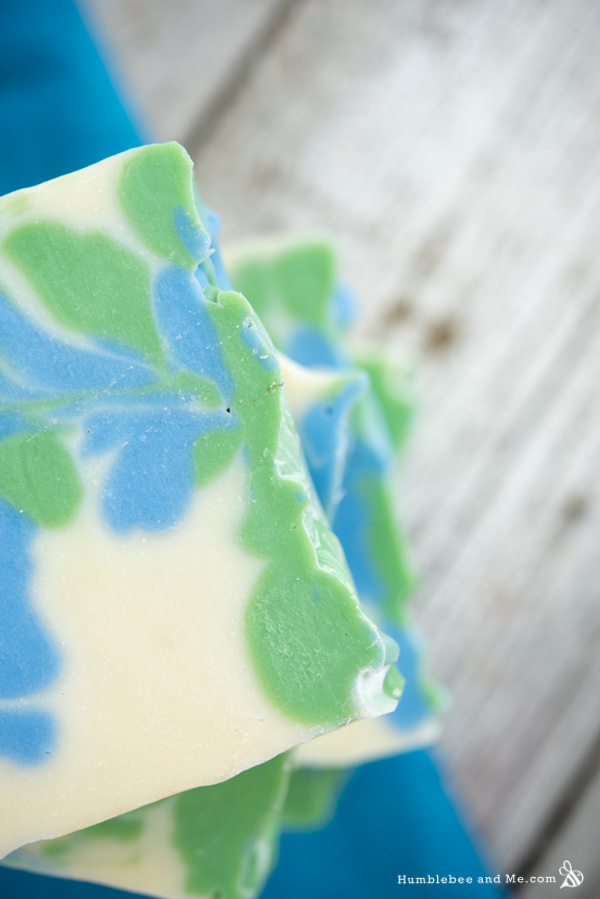