If you love Burt’s Bees lip balm, you should definitely try this formulation. I’ve been working on this project for months, testing and adjusting and comparing it to the original and circling back and trying again, and I think I’ve gotten really, really close. I wouldn’t call my version completely identical, but it has the lovely slippy/creamy/minty blend that I’ve always loved about Burt’s ❤️ 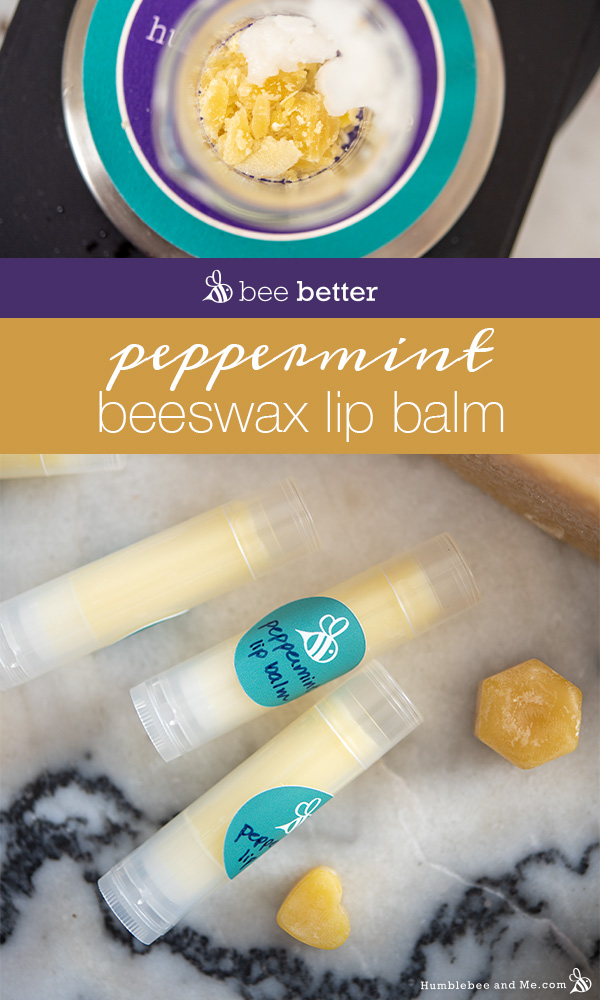 Burt’s Bees peppermint lip balm was one of the first products I ever tried to dupe, and I remember those early efforts with a mix of fondness and cringe. The formulations were so thoroughly mediocre that none of them ever made it onto Humblebee & Me, so while I consider this project a Bee Better formulation, I don’t have a previous version to link to. 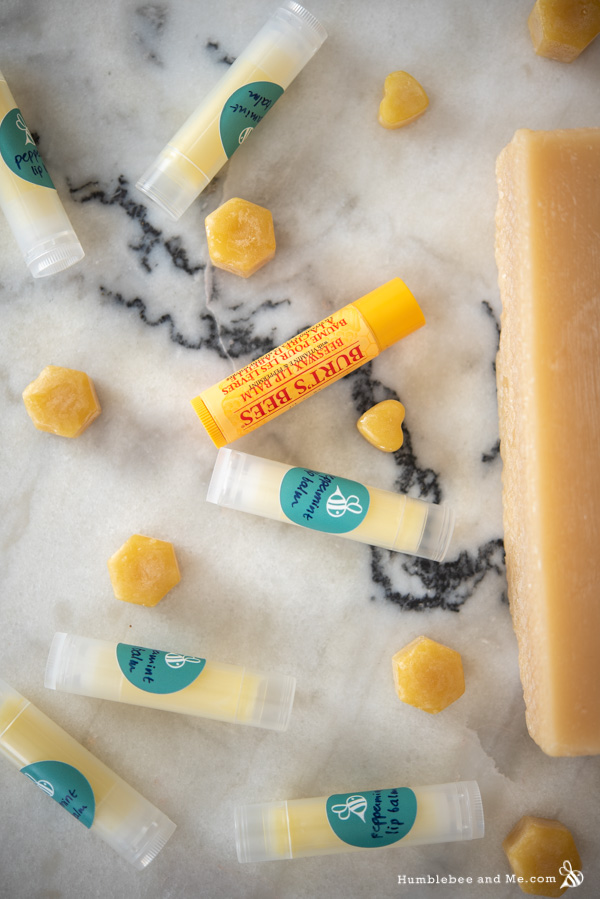 The original ingredient’s list for Burt’s Bees peppermint lip balm is as follows:

That’s a pretty short ingredient list, but there’s still a ton of different ways to combine those ingredients in descending order and come up with wildly different finished lip balms, even though the ingredient lists would be the same. This makes me very excited 😄 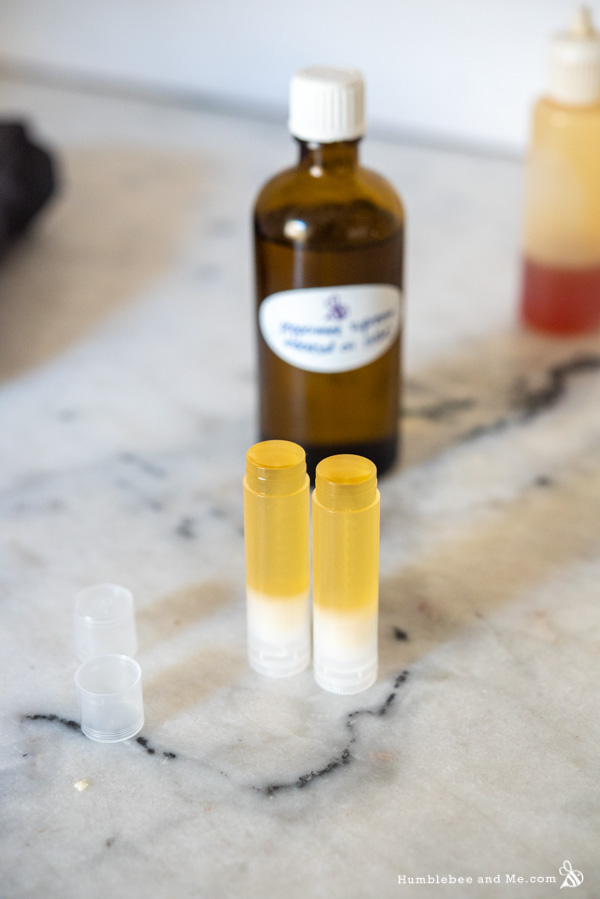 I remember thinking back in 2011 that there was just no way that beeswax could actually be the first ingredient on the ingredient list because surely that much beeswax would create a rock, no? Ahh, the newbie hubris 😂 I also remember using a lot of unrefined lanolin in those early attempts, resulting in a lip balm that positively reeked of lanolin. I was recently reminiscing about this early DIY with a friend who ended up with a few tubes of it back in 2011; she remembered it… and remembered putting it in a drawer to languish after one aggressively lanolin-flavoured application 🤣 I can’t say I blame her! 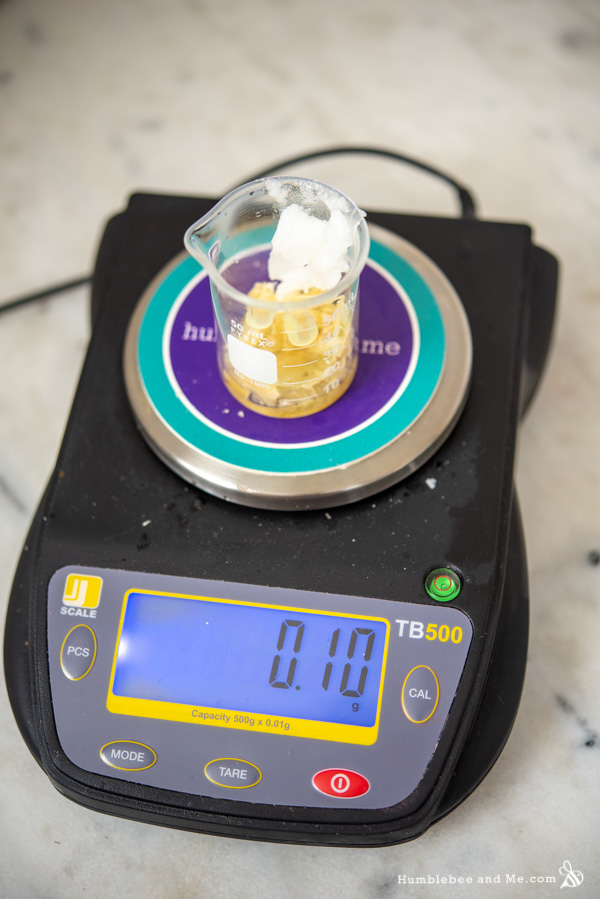 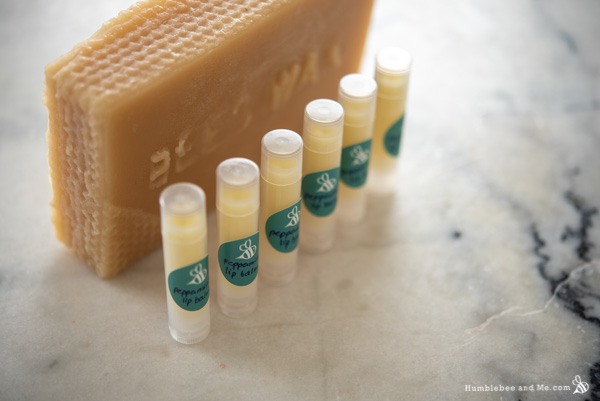 Turning those ingredients into a formula

I’ve learned a lot since 2011, so when I remembered that Burt’s Bees existed sometime last summer I thought I should give a DIY’ed version another go.

One of the most useful learnings of the intervening decade was how close (percentage-wise) side-by-side ingredients could be in an ingredient list. This would allow beeswax to be the first ingredient without the finished formulation losing the lovely glide of Burt’s. After all, 34% + 33.5% + 32.5% = 100% with very little spread in concentration between the three ingredients. If the second two ingredients are coconut oil and sunflower oil, there’s plenty there to balance out the beeswax. I’m not sure why I didn’t realize this a decade ago, but I got there eventually 😝 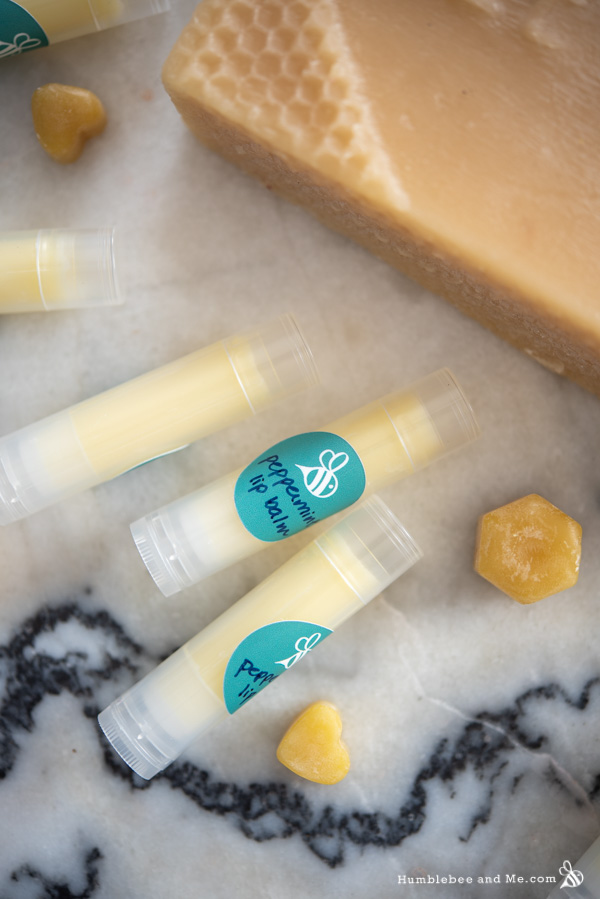 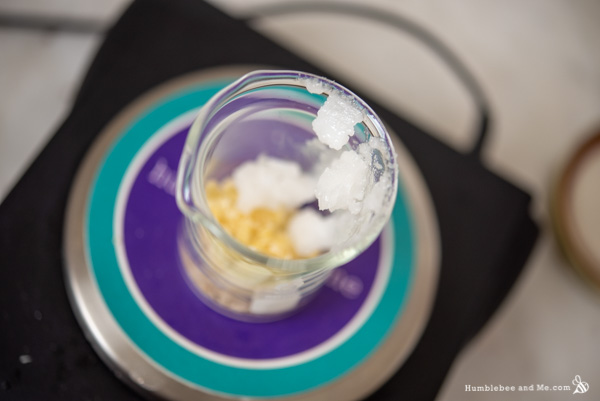 So, I started to experiment with some very snug blends of beeswax, coconut oil, and sunflower oil, rounding those three main ingredients off with varying amounts of peppermint essential oil, lanolin, and tocopherol. I opted to drop the soybean and canola oils, figuring they were both likely present below 1% given they were listed after both antioxidants, and tack any need for additional liquid oil onto the sunflower oil. Even though the concentrations of those two liquid oils was pretty low, given how closely grouped the first three ingredients could be, adding the % of soybean and canola oil onto the sunflower oil could have been enough to bump a liquid oil to the top of the ingredient list, so I experimented with that, too. I also dropped the rosemary leaf extract as we were already getting some antioxidant-y goodness from the vitamin E (and I didn’t have any rosemary leaf extract). 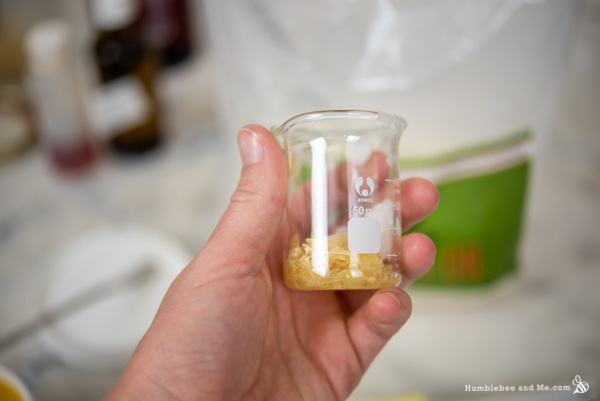 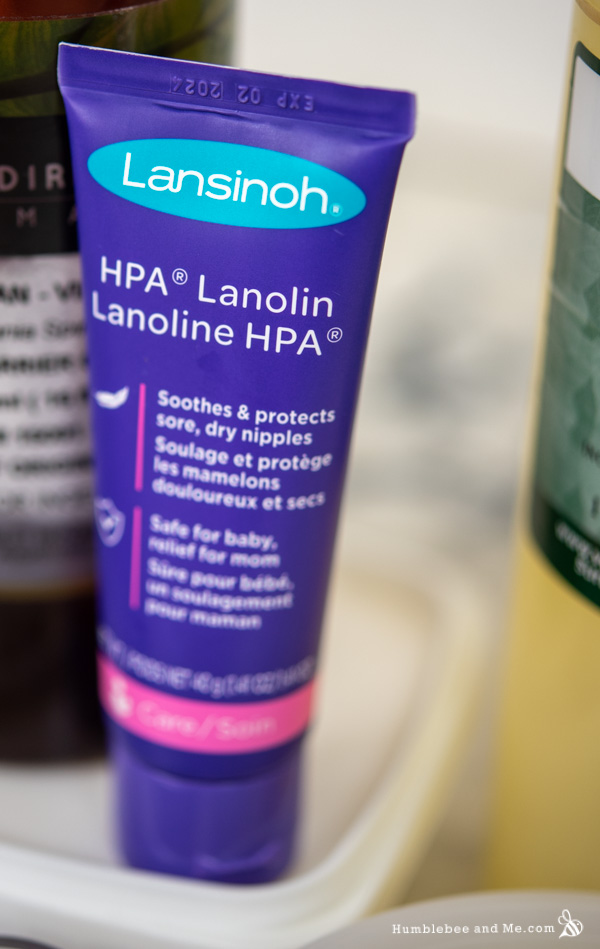 Earlier versions used 1% peppermint essential oil, but that really wasn’t anywhere close to minty enough. As that percentage crept upwards, the lanolin was able to follow (especially once I got some refined lanolin so I didn’t have to worry about the stink or flavour coming through!). I stopped at 2.5% peppermint essential oil as that’s really quite a lot of essential oil, but mine still isn’t as minty as Burt’s. I figure theirs either uses a higher menthol content peppermint essential oil (mine is around 50% L-menthol, but I see New Directions now sells one that is around 70-75%!), and/or they’re just using more essential oil. I was wary of going higher than 2.5%, though, so I decided to lose a bit of tingle… for now. I might just have to order a bottle of that really menthol-heavy stuff and try it! 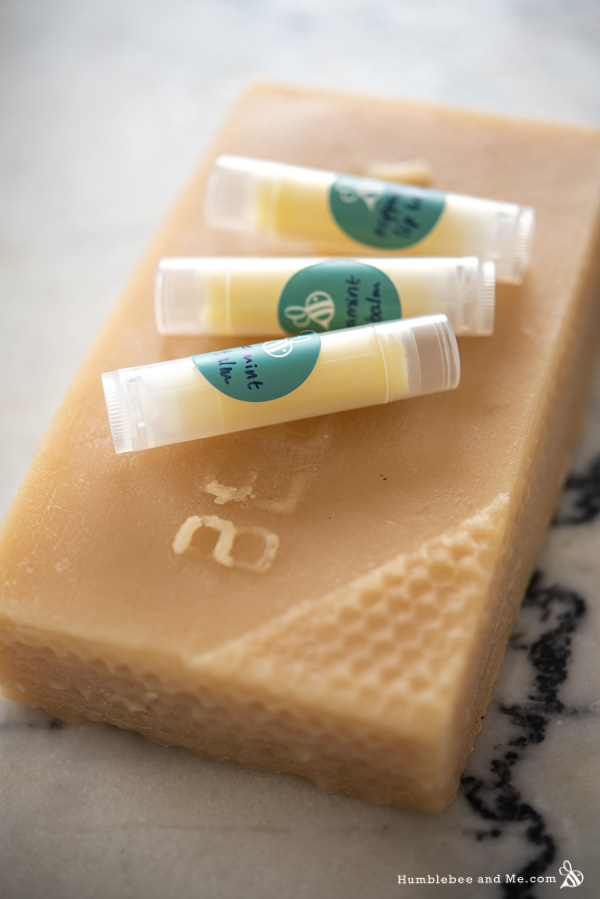 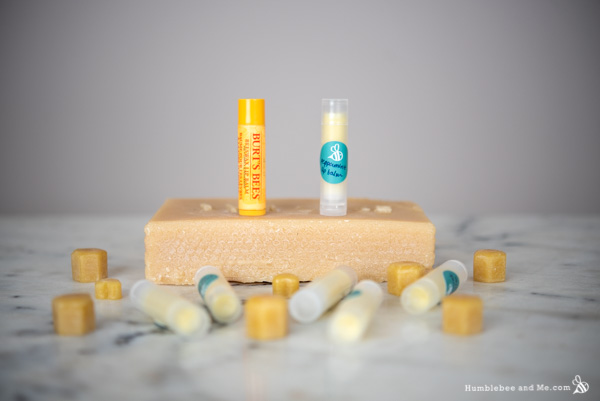 After months of testing, tweaking, and comparing, I settled on the version of the formulation I’m sharing here today. This is the one I think is the closest to Burt’s version, but I’m also sharing five more variations/iterations with my $5 and up Patrons. If you’re interested in trying some of the other versions of this formulation, please consider becoming a patron ❤️

Weigh the heated phase ingredients into a small heat-resistant glass measuring cup (I like something with a pouring spout for lip balm). Place the measuring cup in your prepared water bath to melt everything through.

While the heated phase melts, prepare your tubes for filling. As written in grams, you’ll need 9 standard lip balm tubes.

After about 20 minutes everything should be completely melted through. Remove the water bath from the heat, remove the measuring cup from the water bath, and dry it off with a dishtowel. Quickly weigh in the cool down phase, stir the mixture with a flexible silicone spatula to combine, and pour the lip balm into the tubes. Leave to cool.

Once the lip balm has set up, cap ’em, wipe ’em down, label, and you’re done! Use as you’d use any lip balm. Enjoy!

Because this lip balm is 100% oil-based, it does not require a broad-spectrum preservative (broad spectrum preservatives ward off microbial growth, and microbes require water to live—no water, no microbes!). Kept reasonably cool and dry, this lip balm should last at least a year before any of the oils go rancid. If you notice the balmstarts to smell like old nuts or crayons, that’s a sign that the oils have begun to oxidize; chuck it out and make a fresh batch if that happens. 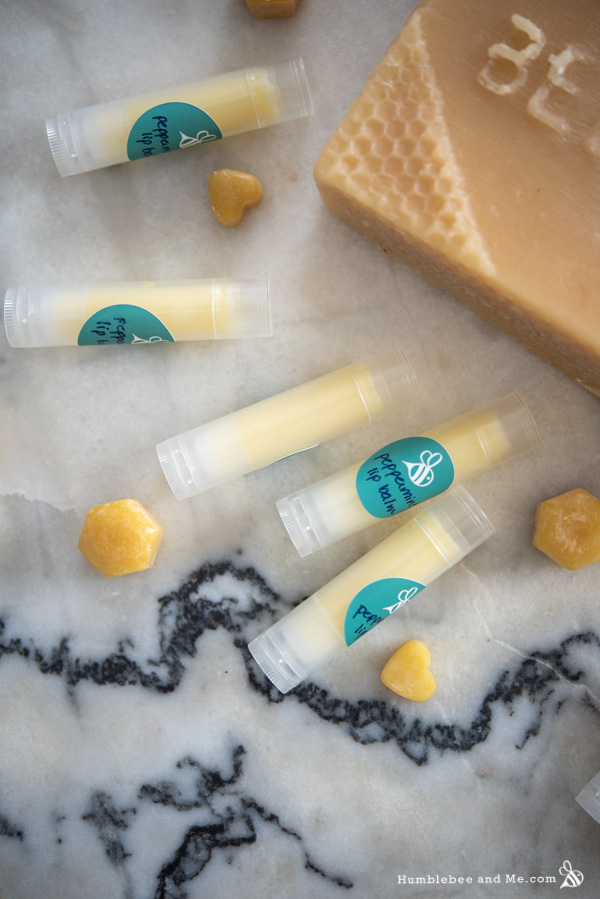 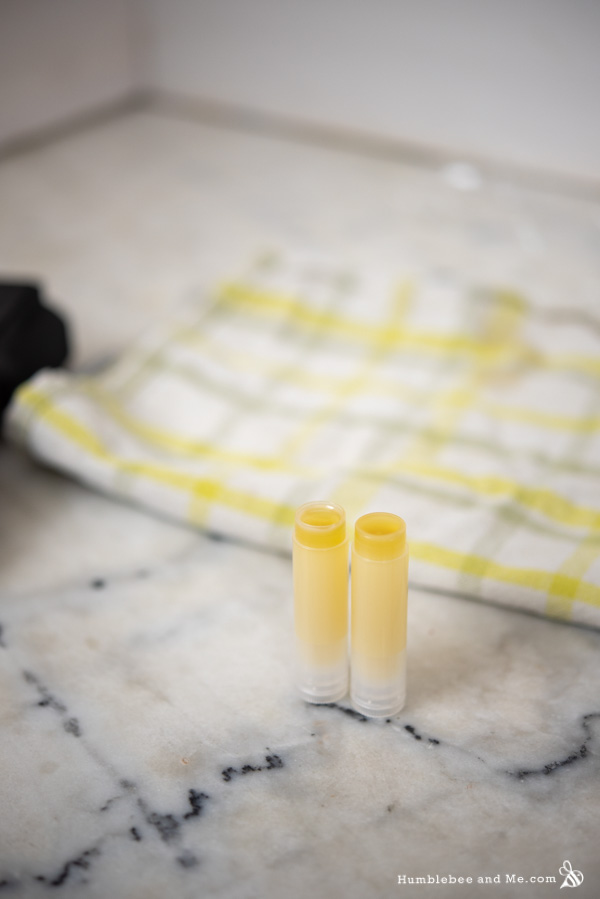