I think it’s about time we welcomed summer with a straight up summery soap (even if it is barely spring… let’s just say we’ve built in ample aging time). This pretty pink bar is a tribute to pink lemonade, and as such it smells bright and lemony. 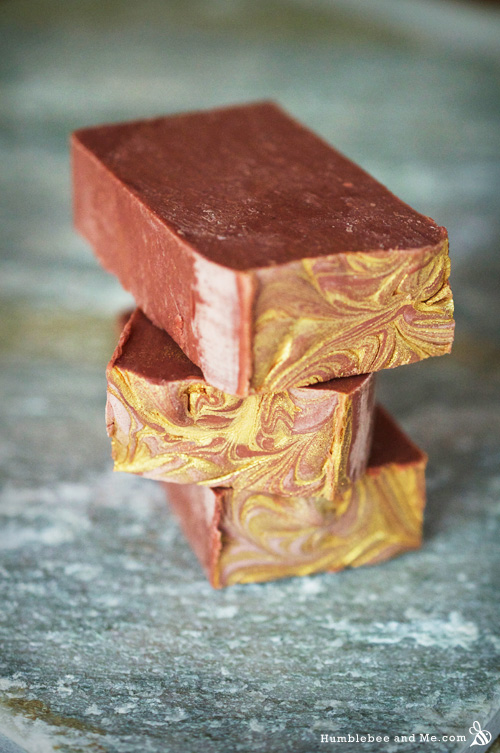 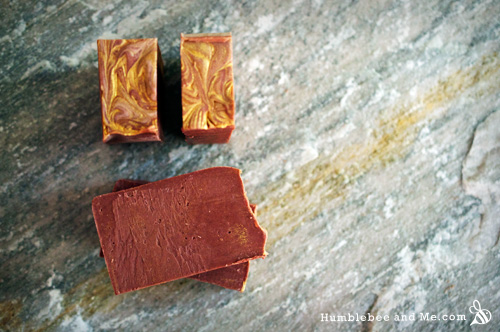 The pink hue comes from the addition of Australian Pink Clay. I love adding clay to my soaps for added slip and cleansing power, and I especially love to take advantage of my clays for their pretty colours. 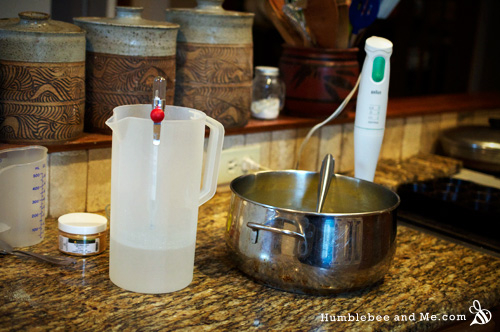 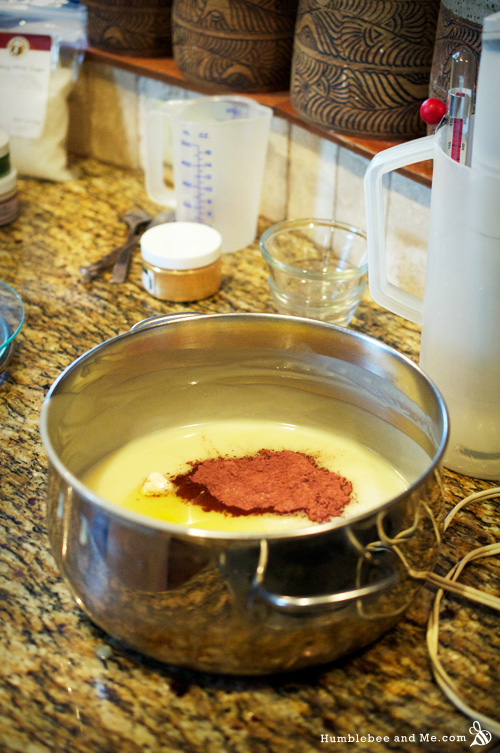 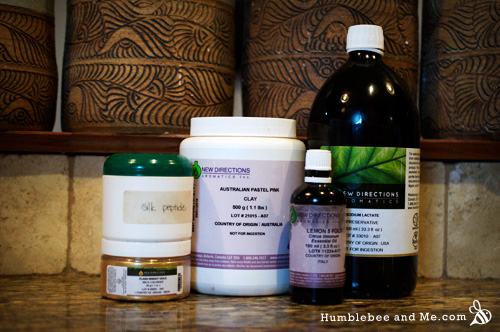 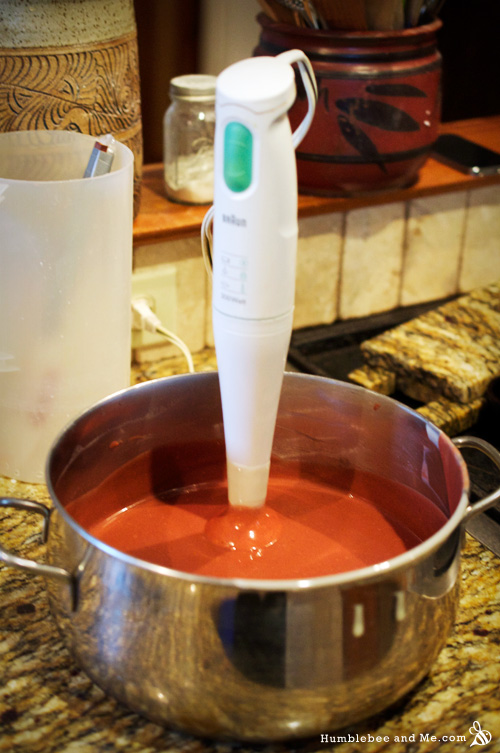 The final bars are hard, sudsy, and wonderfully fresh, with a pretty gold shimmer on top to boot. Welcome, dear summer (eventually)—you’ve been sorely missed. 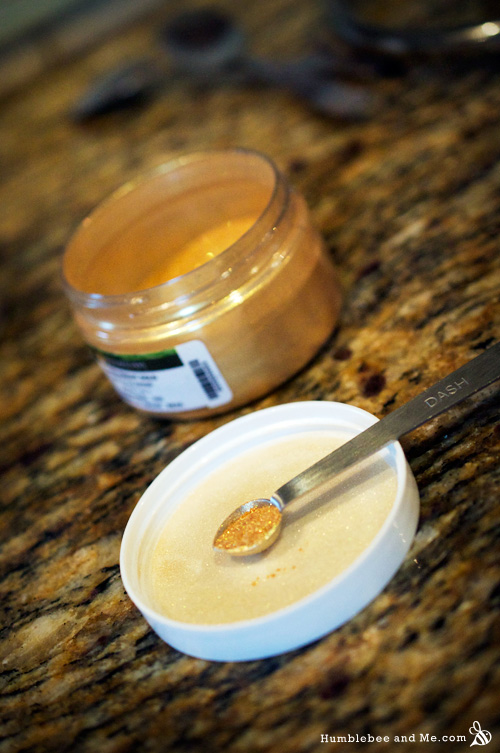 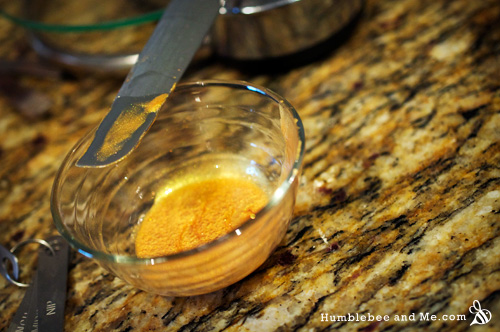 Use SoapCalc to calculate your final amounts of oils, lye, and water based on the size of batch you want to make. (Unsure about how to use SoapCalc? I made a video to walk you through it! Please ensure you’re familiar with standard soap making procedure before diving in.)

Once the soap has reached a loose pudding-like trace, blend in the clay, essential oil, and silk. Use an immersion blender here so you can be sure all the clumps of clay are broken up, giving you a smooth bar without clay clumps in it.

Measure out about 10% of the soap batter into another container. The precise amount is terribly important, but I would err on the side of too little than too much. This is the portion of the soap we’ll be stirring the 4 dashes of gold mica into, and you’ll be surprised at how far 4 dashes doesn’t go. We’ll be swirling the two parts together so you have a gold-ish swirl through the bars; use less soap here for a more noticeable gold swirl. For reference, I made a 750g batch, used 100g of soap batter, and added 5/8 tsp of gold mica.

Stir the small amount of soap and gold mica together until smooth. Transfer the gold soap back to the pot and stir the pot very, very briefly. Perhaps one or two strokes—you want a swirl, you don’t want to start blending the two parts (remember they will continue to stir as you pour the soap into the mould).

Pour the soap into the mould. Blend the pinch of gold mica together with a bit of liquid oil (specifics don’t matter much here, just choose something that doesn’t have a strong colour) to make a shimmery liquid. Lightly drizzle this shimmery goodness over the top of the soap. Then, using a toothpick, swirl away. Once you’re happy with the swirls, discard the toothpick.

Cover the soap, lightly insulate it, and let it saponify for 24 hours. After 24 hours have passed, remove the soap from the mould, cut it, and let it age for at least 3–4 weeks before using. 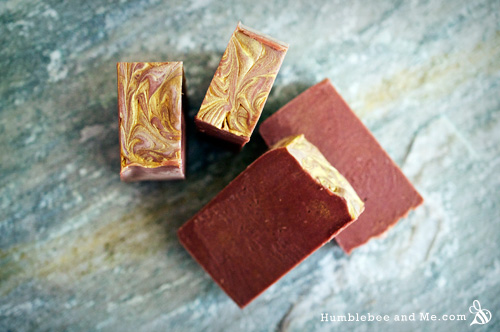 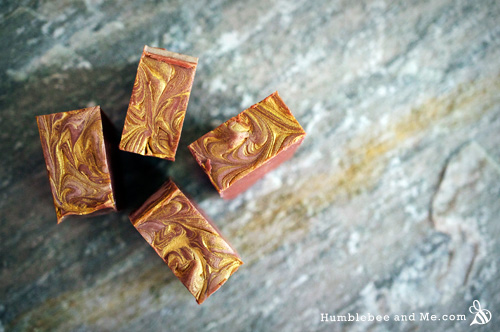