These days it’s not hard to identify me as a new puppy owner—my scratch and bite covered hands and forearms give me away pretty quickly (well, I’ve either got a puppy or a passion for naked arm wresting with rose bushes). I’ve heard puppy teeth described as staples, and I’m inclined to agree. Not standard staples for paper, though—no, no. We’re talking those heavy duty woodworking staples coming from a compressed air powered staple gun. OW. Lottie is getting better with biting (or not biting, as it were) as the days go by, but according to the interwebs, she won’t lose her puppy teeth until May or June, which means when she misses a toy and lands a bite on my hands instead, I’m going to be squealing (and bleeding) for a while. Hence, this salve.

I wanted a salve that I could apply frequently to my hands that would be safe for lightly broken skin (Lottie has yet to inflict any truly heinous wounds), and that would be safe to Lottie to eat in small doses—given how often my hands end up in her mouth, I definitely didn’t want to chance there being anything poisonous in the salve. Among other things, that knocked tea tree oil off the list, as it’s poisonous to dogs if ingested (people, too—don’t eat tea tree oil!). 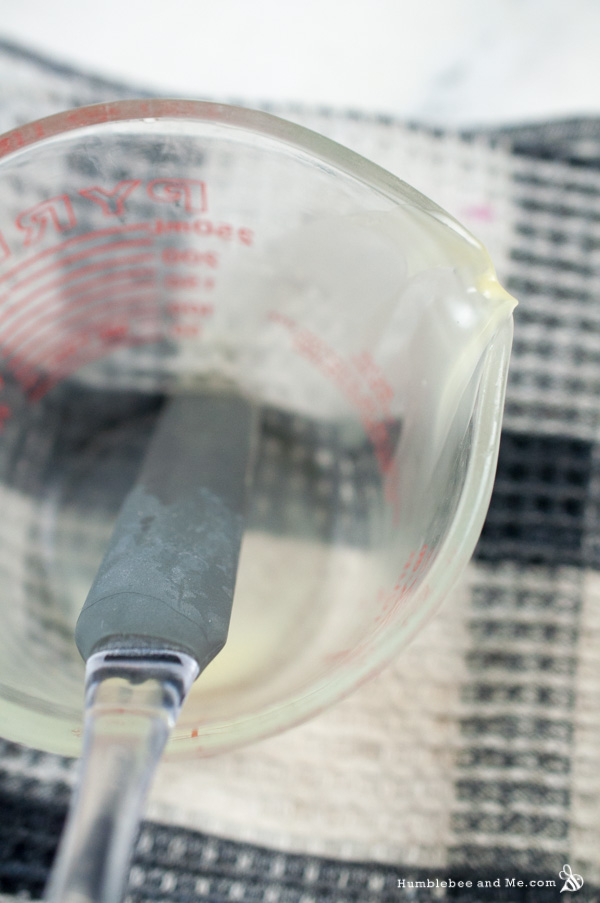 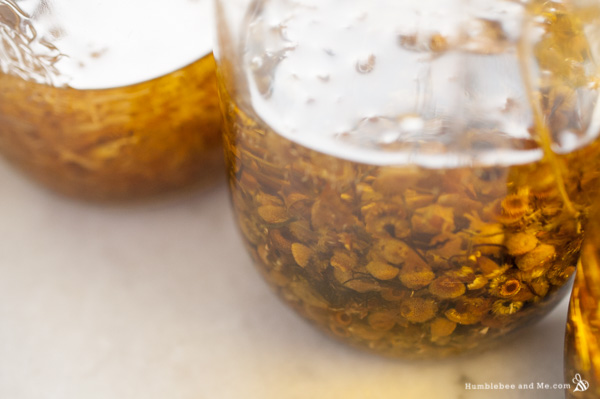 I elected to focus on healing and soothing herb-infused oils as I’ve found them to be wonderfully effective in the past for things like my Scar Salve and Palm Balm, and I love the wonderful nutty-herbal scent of them. I chose healing calendula, plantain, and St. John’s Wort, as well as soothing chamomile. I happened to have all of these herb infused oils kicking around in one of my DIY cupboards—most of them were infused in olive oil. If your herbs are infused in different liquid oils, no worries—that’ll work. I’m mostly concerned about the herbs rather than the absorption speed, so unless you’ve been infusing in something really heavy like castor oil, what you’ve got on hand will work. 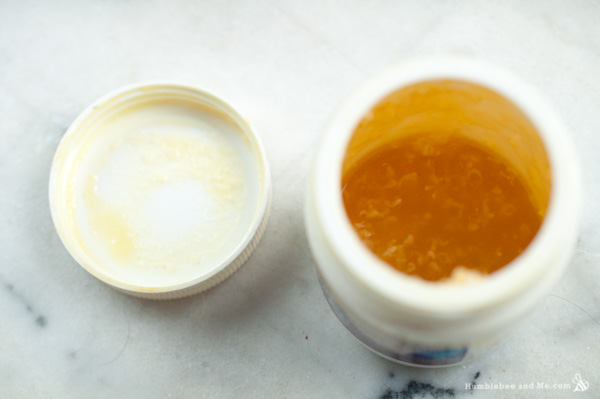 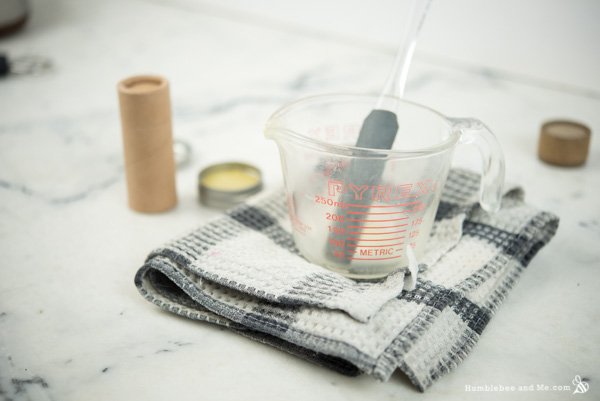 If you don’t already have these herbal infusions on hand, making your own is delightfully easy. You can whip up a few jars to have on hand going forward, or you can weigh 45g (1.59oz) of your carrier oil of choice (olive oil, safflower oil, and sunflower oil would all be good choices) into a small heat-resistant glass measuring cup. Then, grab one of those tea bags you can fill yourself, and measure 1/2 tsp each dried calendula petals, dried chamomile flowers, dried St. John’s Wort, and dried plantain into it. Tie it off, pop it into the measuring cup of oil, and place that measuring cup into a hot water bath. 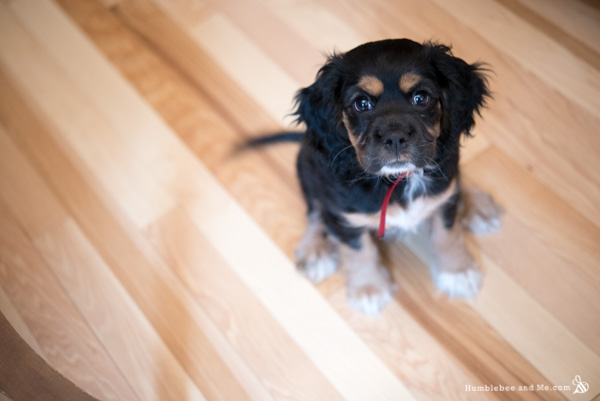 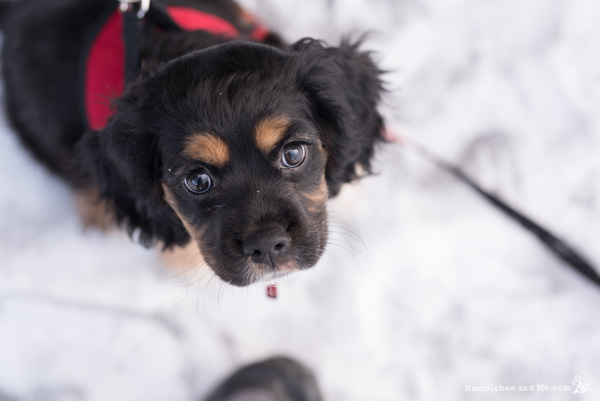 Let the herbs infuse into the oils as if you were making a cup of tea for about an hour, taking care to ensure your water bath doesn’t simmer dry. Once that’s done you can press the tea bag with the back of a spoon to squeeze out as much oil as possible (take care not to break the bag!). There’s your herb-infused oil! You should have pretty close to the 38g (1.34oz) of oil called for in the recipe (you’ll loose some to the tea bag and herbs). If you don’t have quite enough, top it off with some more of your carrier oil. 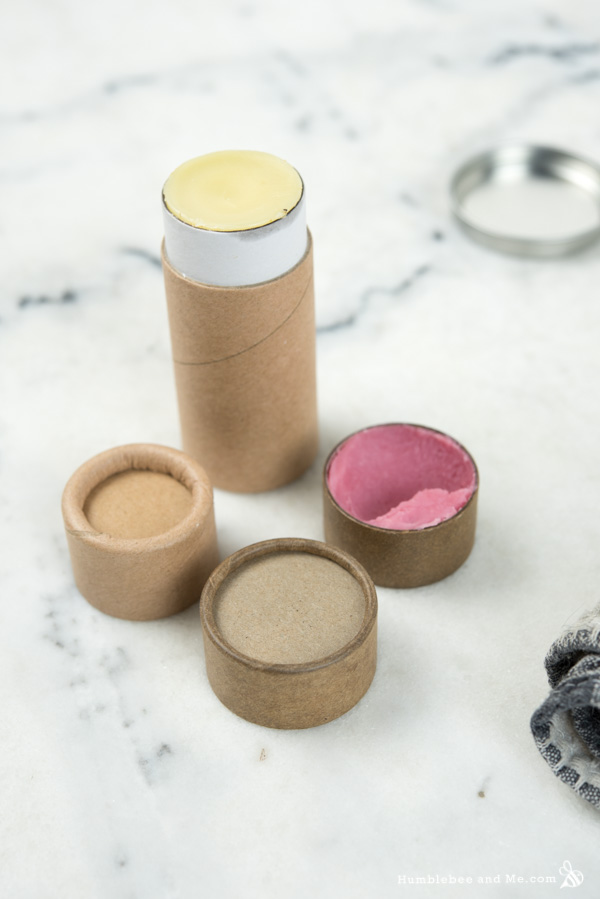 Here you can see the bigger (better) container from YellowBee + a not-so-good one that soaked through in a matter of days. The salve has been in the YellowBee container for about 4 days at this point. 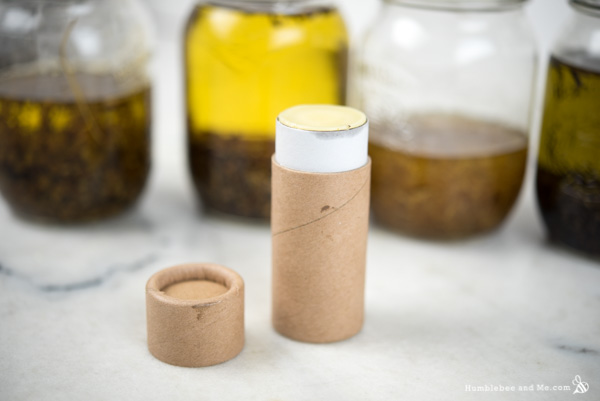 As with all salves, this one comes together really easily once you have your ingredients ready. Simply melt, stir, pour, and leave it to set up. You definitely don’t need a puppy to find this salve useful—it’s amazing for all kinds of scrapes and scratches, but I do think “Puppy-Sporin” is an awfully cute name 😉 I find it absorbs into the skin really quickly, and so far I’m really impressed with the paperboard push-up tube I poured it into. The gliding application makes it fast and easy to put on, and makes it hard to over-apply, so even if you don’t have a paperboard push-up tube, you might consider using a plastic one. Anywho—let’s go make some Puppy-Sporin Salve for Scrapes & Scratches! 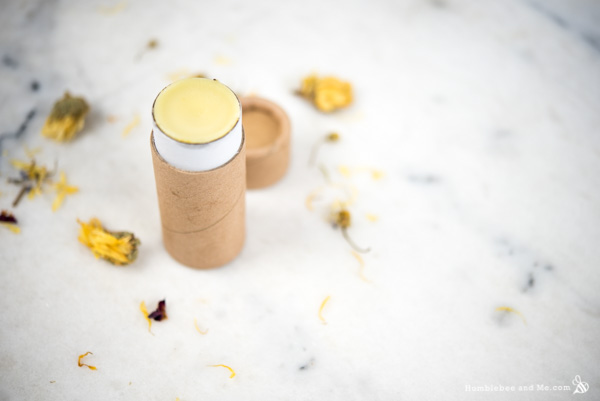 See the recipe pre-amble for instructions on making your own herb-infused oils.

Weigh the herb infused oils, emu oil, and beeswax into a small heat-resistant glass measuring cup. Place the measuring cup in your prepared water bath to melt everything through.

Pour the salve into a 60mL/2oz paperboard push-up container, 60mL/2oz tin, or a push up/twist-up tube (extras are great in lip balm tubes). Ivan over at YellowBee sent me the push-up tube I used and thus far I’m really impressed! It seems to be performing much better than the one I tried to use for my Intoxicating Rose Salve.

Once the salve has set up (~20 minutes), it’s ready to use! Apply it to any scratched-up, sore skin—I’m especially liking it before bed time.

JUST IN CASE IT’S NOT CLEAR FROM THE PRE-AMBLE: THIS SALVE IS FOR HUMAN USE ONLY. DO NOT PUT IT ON YOUR DOG! IT IS FOR WOUNDS CAUSED BY PUPPIES, NOT FOR THE PUPPY.

If you don’t have andiroba or emu oil, make up the amount with additional herb-infused oils. I’d probably add more plantain and/or calendula, but that’s up to you! You can make the salve vegan by using 11g (0.39oz) of carnauba or candelilla wax instead of beeswax.