Shave it up: Homemade Shaving Soap

Chances are, unless you’ve embraced the European way, or are a hermit or hobbit, you shave something on your body (I don’t need a list). When I first started using shaving cream I thought it was the equivalent of chocolate mousse for my skin, except it smelled like fairy farts and unicorn tears, and was made from clouds and the dreams of small children. It was GREAT. The bottle promised intense moisturization and glide, and was covered in fake little dew drops and swirls in a rather transparent attempt to convince you that you were shaving your legs in a Swedish spa. 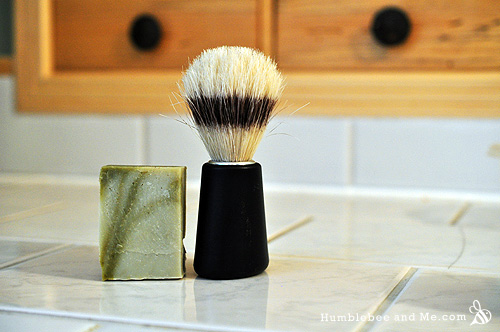 I’m not here to try and convince you to stop shaving. I’m sure there are many benefits, like added warmth, lower maintenance, a stellar built-in Teen Wolf costume, and a strengthened ability to attract the opposite sex (hypothetically, at least… something to do with scent trapping). So, if you want to go au natural in the shaving department, I’d love to hear how that works out for you, but for now, that’s not me as I’ve already chosen a Halloween costume for this year.

Eventually, though, the unicorn tears turned from tears of joy to tears of agony, and the children’s dreams morphed into nightmares. Shaving cream lost its charm. I no longer wanted to pay $4 for berry-scented foam that had only one purpose and came in some seriously unfriendly packaging that I had to dispose of at least once or twice a month. Like an ill-maintained relationship, the romance was gone. Also, I like making things.

Enter: shaving soap! Once you can make normal soap, shaving soap is incredibly easy to make. No, really. You just use a bit more castor oil (USA / Canada) and add clay. That’s it. For real. It is best used with a brush, which adds all sort of turn-of-the-century romance to your de-hairing rituals. The lather is great, but it won’t be the same as the stuff you’re used to getting from a can. It’s less like frosting and more like bubble bath.

Follow the directions I’ve laid out in my entry on making your own soap, adding the clay to the oils as they cool.