Back when Jess & I made Christmas Stripe soap, we also made this soap, which I’m calling Snowdrift soap. It smells of wintergreen and spearmint, and has a nice wintery, holiday feel without taking the traditional red/white/green + cinnamon route. 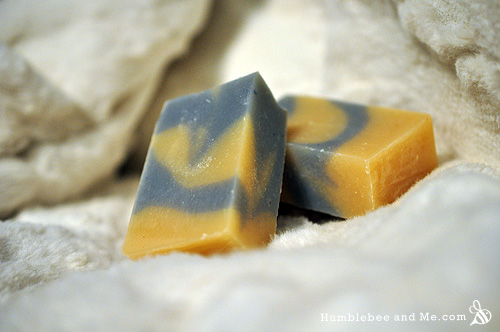 Blue oxides add the blue, and while I added some titanium dioxide for the white, it would appear I didn’t add quite enough. Oh well.

30g essential oils of spearmint and wintergreen per 500g oils

Follow my basic soap making instructions, adding the clay and essential oils at trace. You’ll want a medium trace so you can get distinct, yet still swirled, layers. Divide the soap in half. Colour one half white with titanium dioxide, and the other half blue with blue ultramarine (not too much of either, you’re going for more of a tint than a bright dye job). Alternate the colours in the mould, and then run a spoon or spatula through the soap, twirling to swirl. Sharply rap the mould on the counter to knock out any air bubbles.