Welcome to the second soap (and the second theme) of the 2017 Christmas DIY-ing season! These beautiful bars have a striking pale blue corner that contrasts the creamy white majority, and the whole lot is topped with a double glitter topping. These aren’t beginner bars, but if you’re a comfortable soaper with a solid handle on what a thin trace looks like, there’s nothing too complicated going on here. And, as an added bonus, this Snowflake Soap is a pretty hard formula that’ll age up pretty quickly, so if you’re a procrastinator you’ll definitely want to keep them in mind!

I’ve dubbed our second theme “snowflake”, and I decided to do something a bit different. Many of my Christmas themes in the past have been quite scent focussed, and often food-themed (Cranberry Sauce, Fruitcake, Chocolate Orange…), but I wanted this theme to be more visual and textural. This one is more about rich, creamy whites—channeling snowdrifts at dawn, heavy-flaked snowfalls, and the glee of leaping into a pile of deep, fluffy powder. I don’t associate a lot of smells with these memories as they’re typically quite cold (my nostrils may or may not have frozen shut), so scent is taking a back seat with this theme. I’m endeavouring to keep things in the soft/herbal department, though some projects may warrant something different. We’ll see how it goes 😃 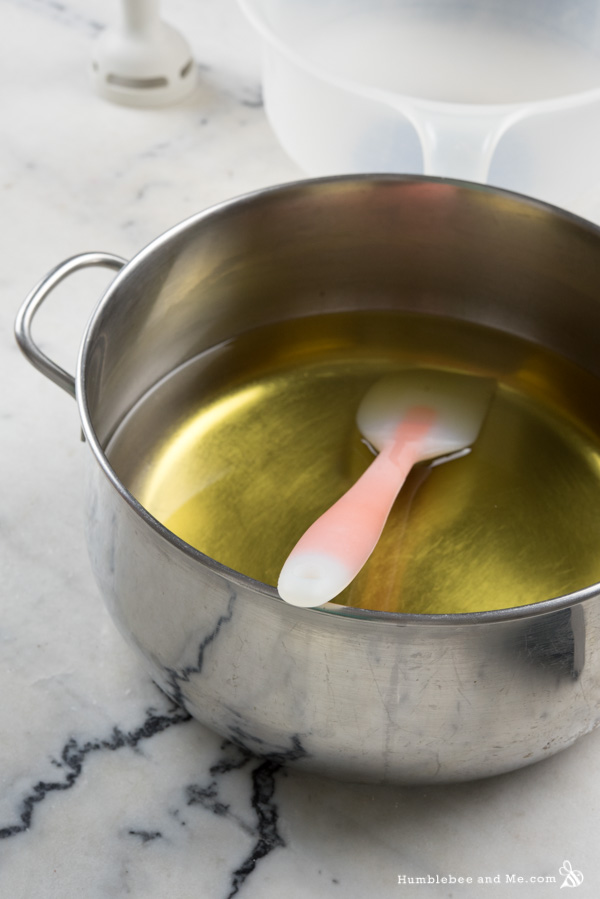 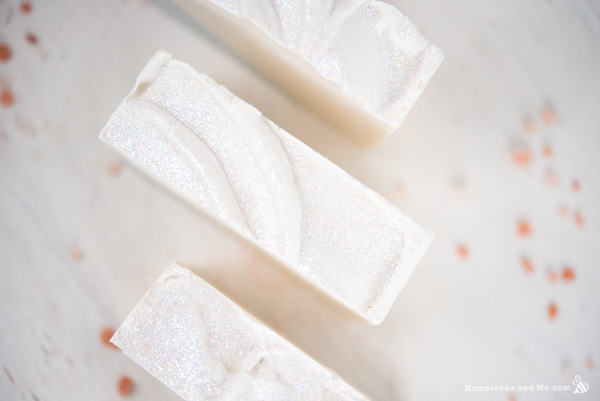 When it comes to this soap, there’s a couple tricky-ish things to keep in mind and have sorted before you start. The first is that we will be bringing our soap to trace in two parts; one quarter and three quarters. This means you’ll need to know exactly how much your water-lye-clay solution weighs, exactly how much your fats weigh, and what 1/4 and 3/4 of each of those weights are. Write those numbers down so you can easily refer to them as you work. 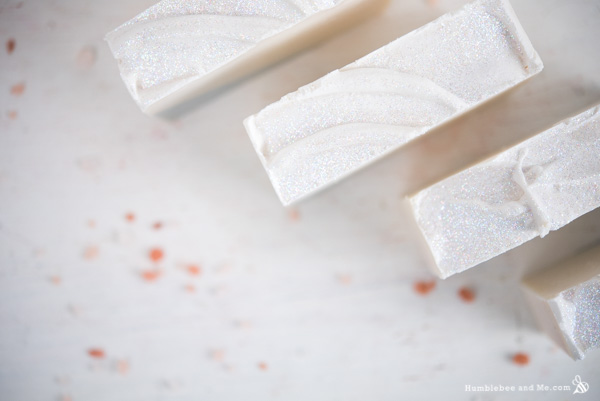 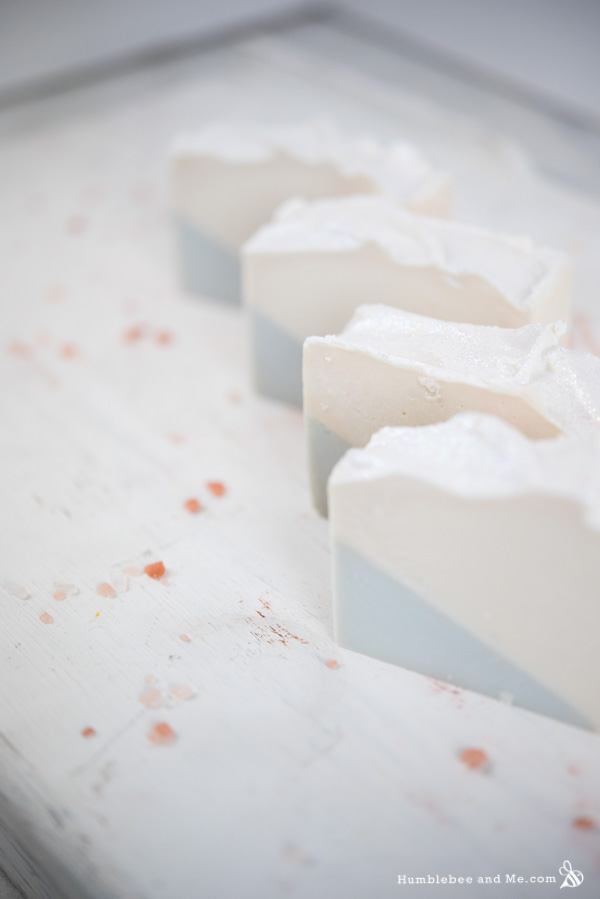 The second thing is a twofer; you’ll need to pour each part at a very thin, completely liquid trace. However, the fat blend for this soap is quite prone to making a beeline for a thick trace as it contains quite a lot of tallow and coconut oil (I did this on purpose to create a really white base for our white soap), so you’ll need to keep that in mind. Ensure you are not soaping all the way at room temperature (I made sure my fats were just a little warm to the touch) to slow down thickening, and pour as soon as you’ve got both a thin trace and the colour you’re going for. 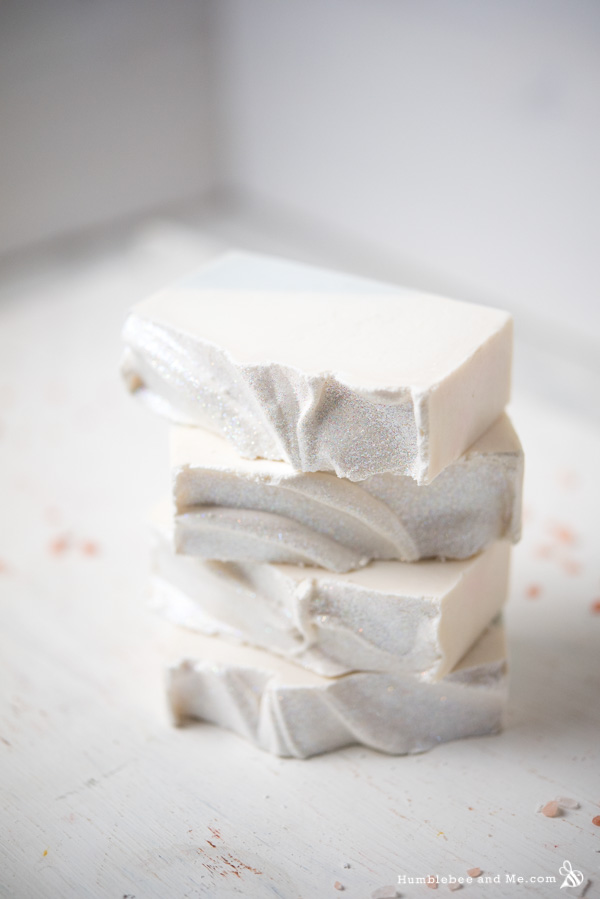 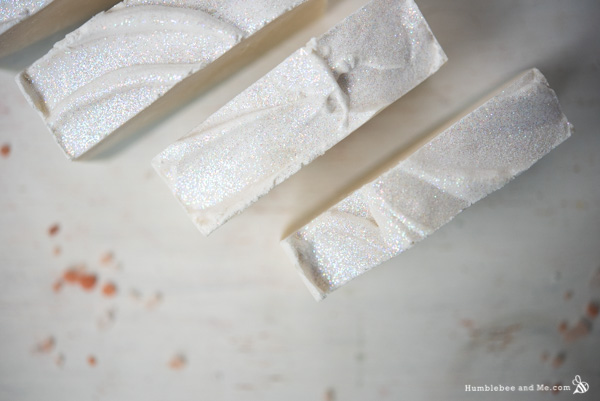 Once you know we’re working in batches and pouring at a thin trace, the how-to for the corner bit starts to make a lot of sense.  The first think you’ll do is prop one of the long ends of your mould up on something that’s about 3cm/1” tall. Then you’ll bring the first quarter of the batter to a thin trace, add a touch of blue, and pour that really thin batter into your tilted mould. Because it’s completely liquid it’ll settle into a perfectly flat top, but in your mould that’s actually an angle. Bam! Next up, leave that to sit for twenty minutes before tracing the white part of your soap and pouring that on top (you’ll need to right your mould to prevent overflow). Give that another ten minutes so the white batter can thicken up enough to swoop it around with a spatula and cover it with glitter, and you’re golden! Now—onto the soap!

Prepare your mould—you’ll want a loaf mould for this soap. Melt your oils together in your soaping pot, and have one container with a pouring spout handy (I use these awesome funnel pitchers). Let your oils cool to slightly warmer than room temperature. Mix up your lye water and let that cool to about room temperature (you can use ice for part of your water to speed up the cooling process)..
The set-up for this soap is a bit more involved. As your lye water is cooling and your fats are melting, it’s time to do some math. Add up the weight of the lye, the water, and your clay. Write that number down. Now, divide it into four, and make note of what 25% (or 1/4) and 75% (or 3/4) of that weight is. Do the same for the weight of the oils. So, if you were making a batch with 1000g of oils, the numbers you’d have for the oils would be 250g for 25%, and 750g for 75%.

You’ll also want to ensure all of your colours are all ready so you aren’t left scrambling and don’t potentially end up with too thick of a trace. Lay out your work area so you can easily grab wee dishes of your different pigments, and be sure to pre-disperse the clump-prone titanium dioxide in some extra rice bran oil so you don’t have to over-blend the batter to smoothly incorporate it.

Prepare your mould by lining it (if required), and then propping one long edge of it up on something about 1”/3cm tall—the angle created by this propping is what will create our angled corner. Ensure the mould is stable and well balanced, and that it’s sitting somewhere you can easily access it, but won’t need to move it immediately after pouring.

Now you’re ready to get started! Begin by blending the kaolin clay into the lye water. Now, pour 25% (by weight!) of your lye solution and fats into a secondary container. Add some blue mica and bring the lot to a very thin trace. Pour that into your mould (take care not to pour down the sides—pour straight into the bottom on the mould), and then leave it for twenty minutes (set a timer).

After twenty minutes have passed, bring the remaining 75% of the batter to a very thin trace, adding some titanium dioxide to ensure it’s nice and white (err on the side of too little, though—too much can cause glycerin rivers). Level out the mould, and pour the thin white batter into the mould, breaking its fall by pouring it over a spatula held close to the surface of the blue corner.

Once the white batter has been poured, leave it to set for ten minutes before scooping and sculpting the top with a spatula, and liberally sprinkling it with glitter. Leave to saponify for 24 hours (don’t wait much longer—these get really hard, really fast!) before removing it from your mould and slicing; be sure to slice it through the side so you don’t drag glitter trails through the bars from the top down. Place the soap somewhere cool and dry to age for at least three weeks (though if they ended up being only two weeks old when you gift them, that’s ok—these bars harden up fast!). Enjoy! 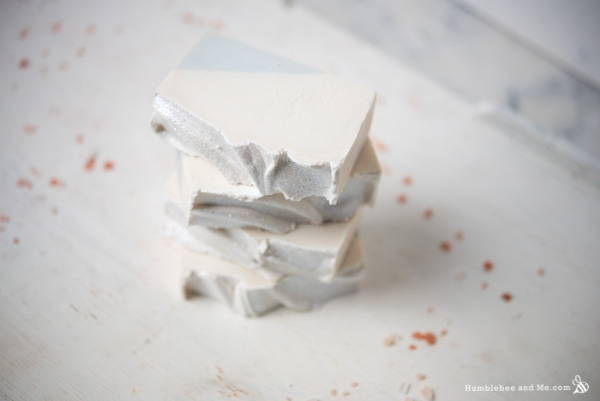 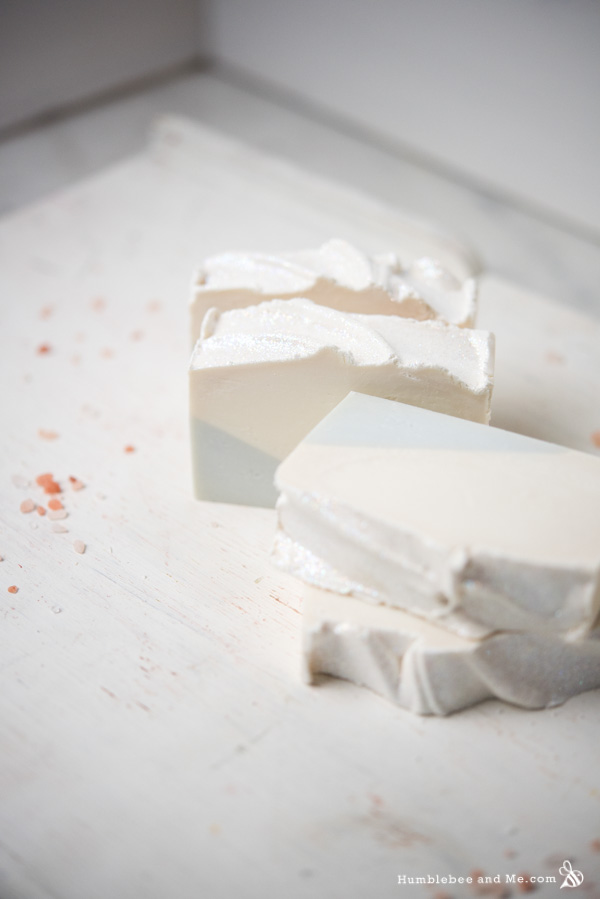