This Solid Dishwashing Brick is the solid, even lower waste sister of 2018’s Super Concentrated Lemon Dishwashing Paste. It’s also super concentrated, but significantly more solid (surprise, ha) and doesn’t require any packaging. I’ve been storing it in a small stainless steel bowl beside my kitchen sink, but a soap dish would also work well (and would be a better idea if you live somewhere more humid than I do). Simply run your wet sponge across the top of the brick and start washing—you’ll be amazed at how clean your dishes get with positively minuscule amounts of product!

The bulk of this Solid Dishwashing Brick is Sodium Coco Sulfate (SCS), which is an awesome surfactant for cleaning up stubborn messes—especially in high concentrations, as done here. In skin and hair care I use it at significantly lower concentrations for awesome lather and cleansing, balancing it out with gentler surfactants like Sodium Cocoyl Isethionate (SCI), but this is for pots and pans, so lots of Sodium Coco Sulfate (SCS) it is! 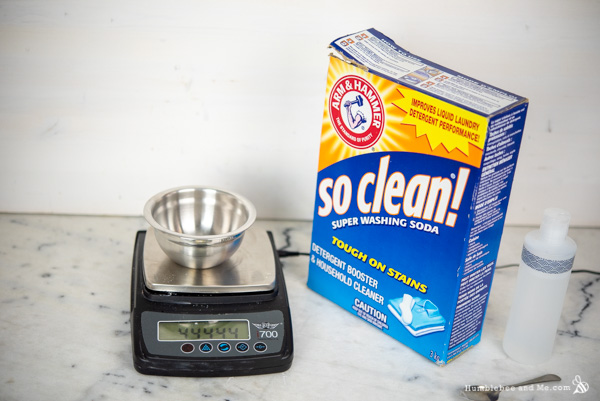 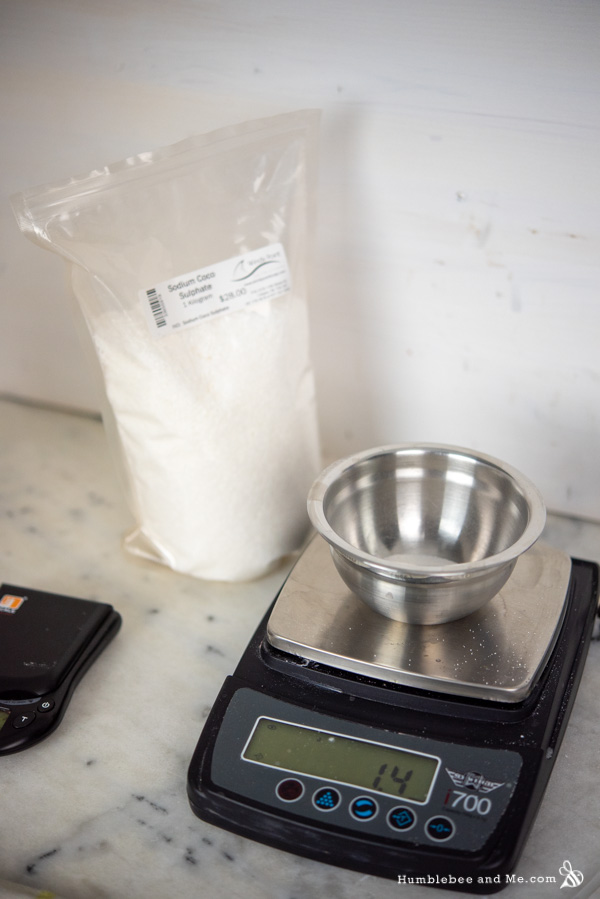 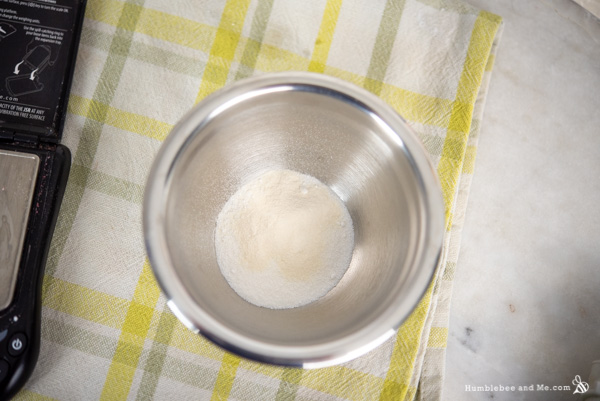 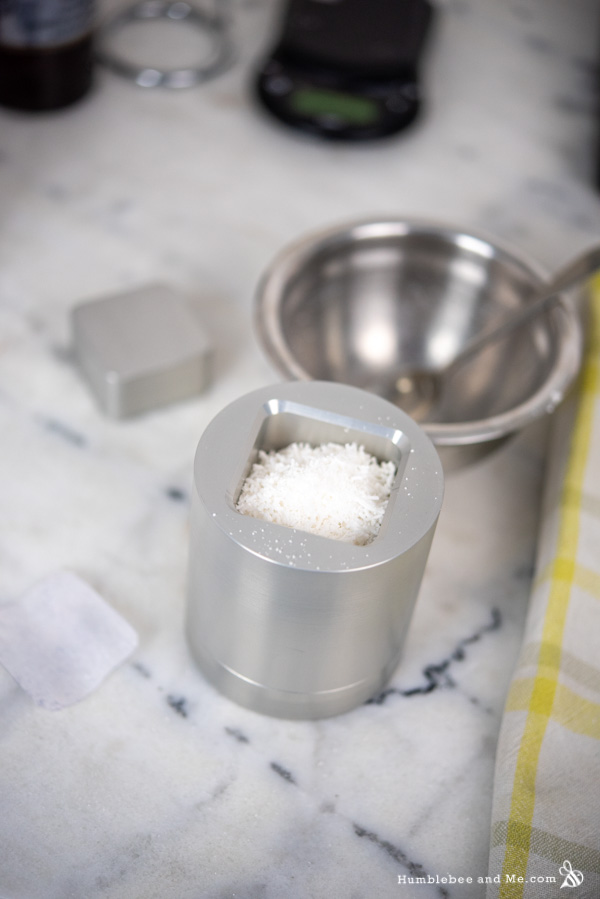 Version 1 of this brick was primarily Sodium Coco Sulfate (SCS) and washing soda with a small amount of carrageenan (a thing I first tried with this formulation), and then moistened with some water. The general idea was to slightly dissolve the base ingredients, press them together, and then have them fuse together as they dry. That did kind of work, but the problem I ran into was that the bar dried out so much over time that it started crumbling aggressively on use, picking up big chunks of surfactant that didn’t dissolve while washing up—I’d find them stuck to my clean dishes after washing. Hmm… not ideal. 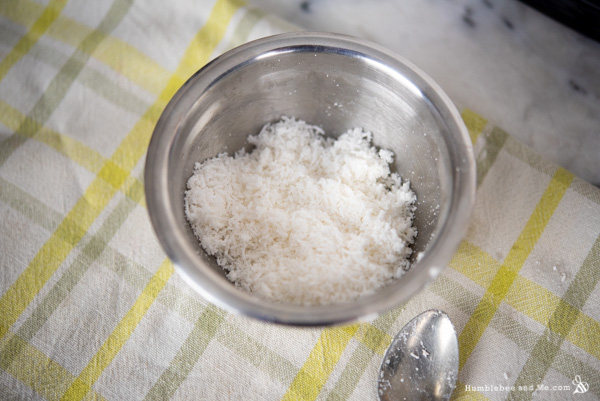 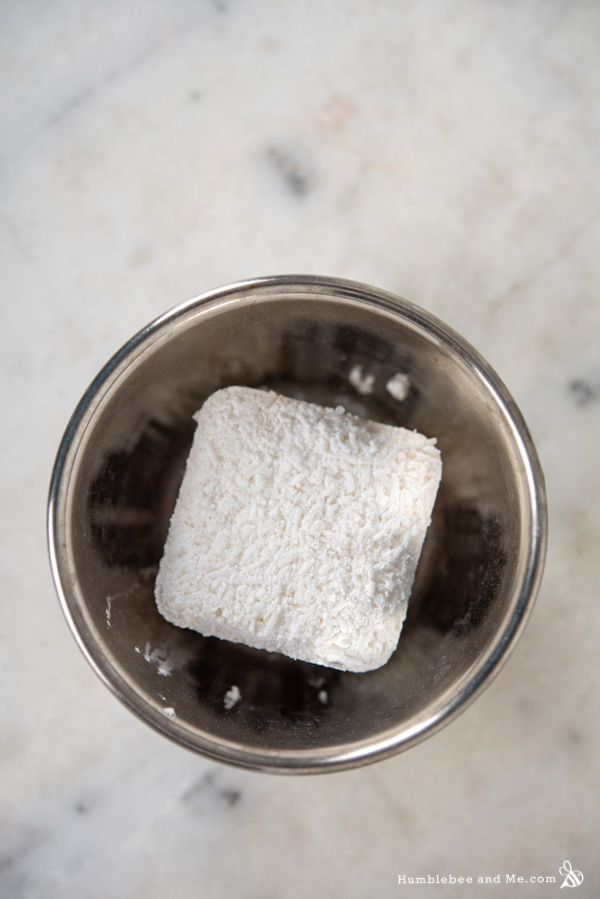 In this photo you can see version 1 of the brick disintegrating after very minimal use.

To fix that problem I included some additional types of liquids; some Caprylyl/Capryl Glucoside and vegetable glycerine. Vegetable glycerine is a humectant, and humectants help keep products from drying out too much, allowing this bar to maintain enough moisture that it doesn’t start to crumble like a dried out sandcastle when you start using it (the non-ionic Caprylyl/Capryl Glucoside helps with that as well, and helps make the brick a bit easier on the hands by blending surfactant charges). 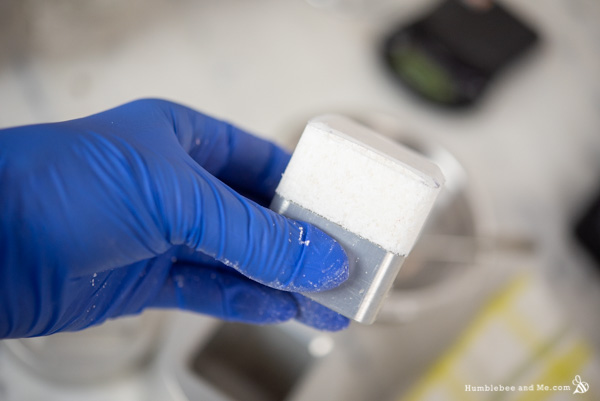 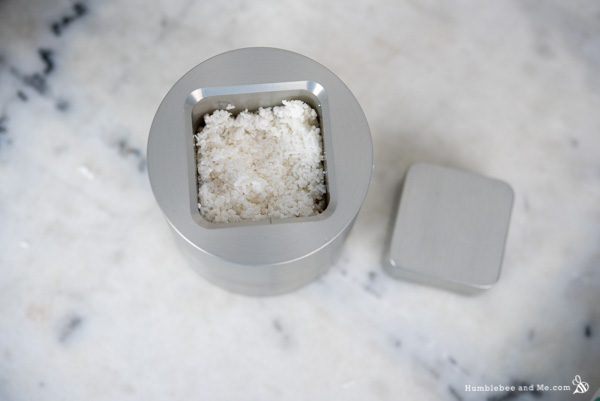 The making part is really easy—mix the dry ingredients together, massage in the wet ingredients, and then press the mixture. You will want some kind of press for these; it doesn’t necessarily have to be a high powered one (I think a hand press would work), but you do need to be able to get some good leverage in order to really squish the mixture together. Then we’ll leave the bars to dry for three days, and that’s it! If you’re more interested in buying a finished product than DIYing, Ariane at La Fille de la Mer sells a Cake Dish Bloc in two different scents 😊

Put on your dust mask and a pair of nitrile gloves. Make sure both fit well; a tight-fitting dust mask does a much better job of keeping powdered surfactants out of your airways, and well-fitting nitrile gloves are much nicer to work in than ones that are sloppily big or too tight.

Weigh the Sodium Coco Sulfate (SCS), washing soda, and carrageenan (the primary phase) into a bowl. Mix with your hands to combine.

Add the secondary phase and mix thoroughly with your hands.

Now it’s time to press the bars! I used the cube mold, pressing 50g of the Solid Dishwashing Brick into each bar. I set the regulated pressure to 55psi. Please watch the video to see this in action. If you don’t have a press you could try hand-pressing the mixture into a firm mold (I don’t recommend silicone as the sides tend to bow out if you really try to compress a mixture in one, and this bar needs some serious squishing). My top choice from the things I already have at home would be a plastic or metal measuring cup. Line the top & bottom with cut-to-size pieces of parchment paper, and then use the bottom of the next size down measuring cup to press everything together as firmly as you can, stamping it around to get full coverage. I’ve also heard good things about moon cake presses!

Carefully un-mold the bars (they’re quite delicate directly after pressing, much like bath bombs) and leave them to dry for at least 48 hours before using.

To use, rub a wet sponge over the surface of the bar to pick up some product, and then use that

Because this dishwashing brick will regularly come into contact with water, I recommend including a broad-spectrum preservative to ward off microbial growth. That said, this bar is very likely self-preserving due to its low water content, high anionic active surfactant matter, and relatively high pH. 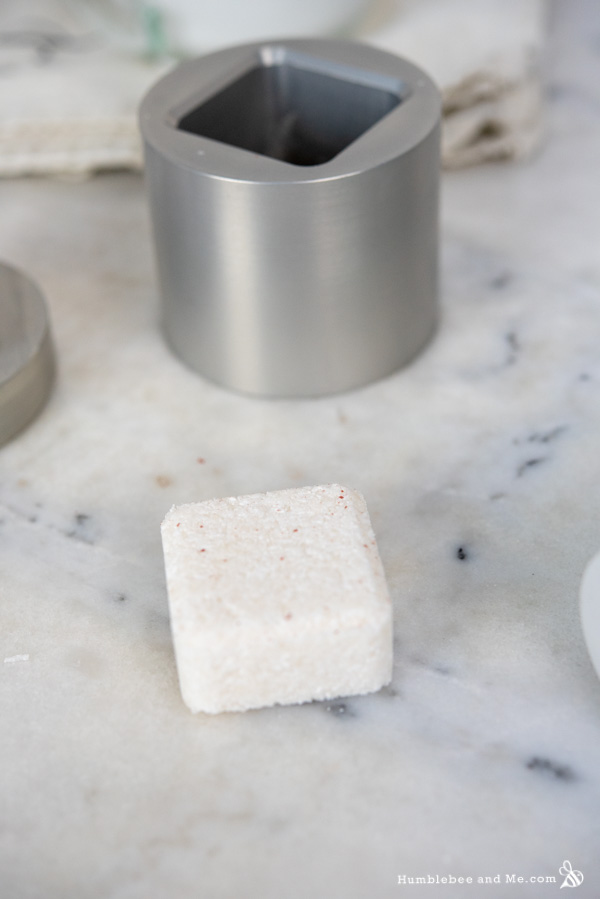 The bath bomb press and cube mould were gifted by The Bath Bomb Press.