Today we are debunking six lotion making myths that I have heard a lot in the decade-plus I’ve been emulsifying on the interwebs. I hope you have a bit of fun with this post, learn some things, and feel emboldened to go out and break some rules! 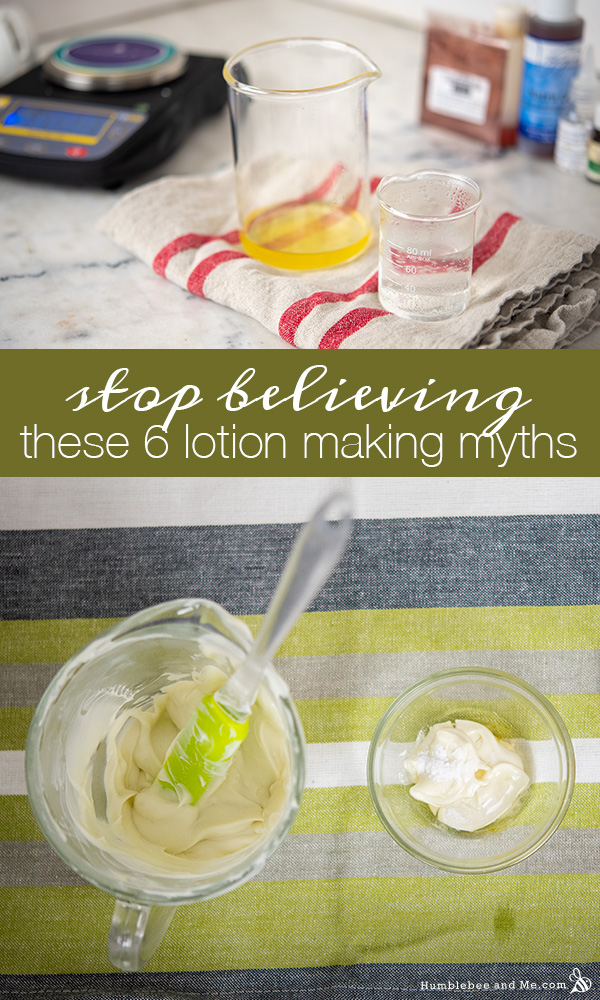 Before we dive into the myths; a few caveats:

And now it’s time for the myths! 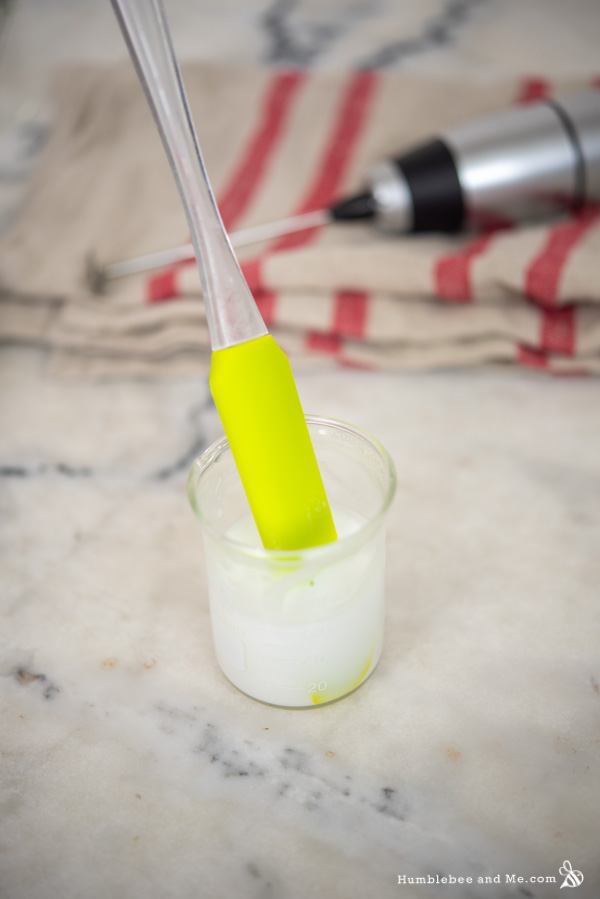 You can change the type of emulsion you’re making by changing the phase sizes or pouring order.

When you emulsify oil and water, very generally speaking, you’ll either be making an oil-in-water (O/W) emulsion or a water-in-oil (W/O) emulsion, with oil-in-water emulsions being more common. In this style of emulsion, the oil phase is the inner phase, while the water phase is the outer/continuous phase. 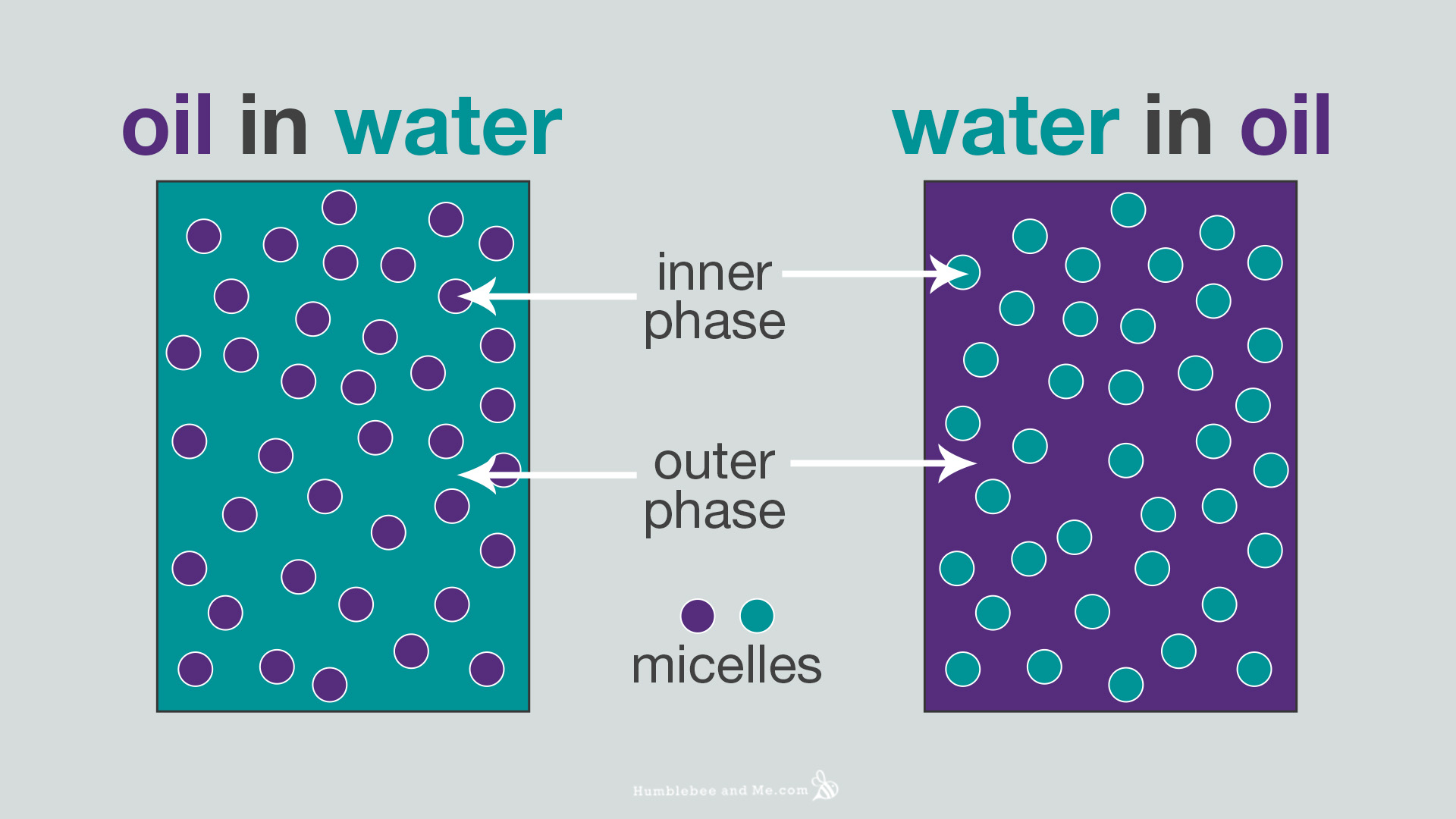 The inner phase is sequestered away in the micelles of the emulsion (Lab Muffin has a good explanation and some helpful diagrams; click here!) while the outer/continuous phase is what those micelles are bopping around in. Imagine some Smarties (or M&Ms, for my American readers) in a glass of water; the chocolate is the inner phase, the candy coating is the emulsifier, and the water is the outer (continuous) phase. 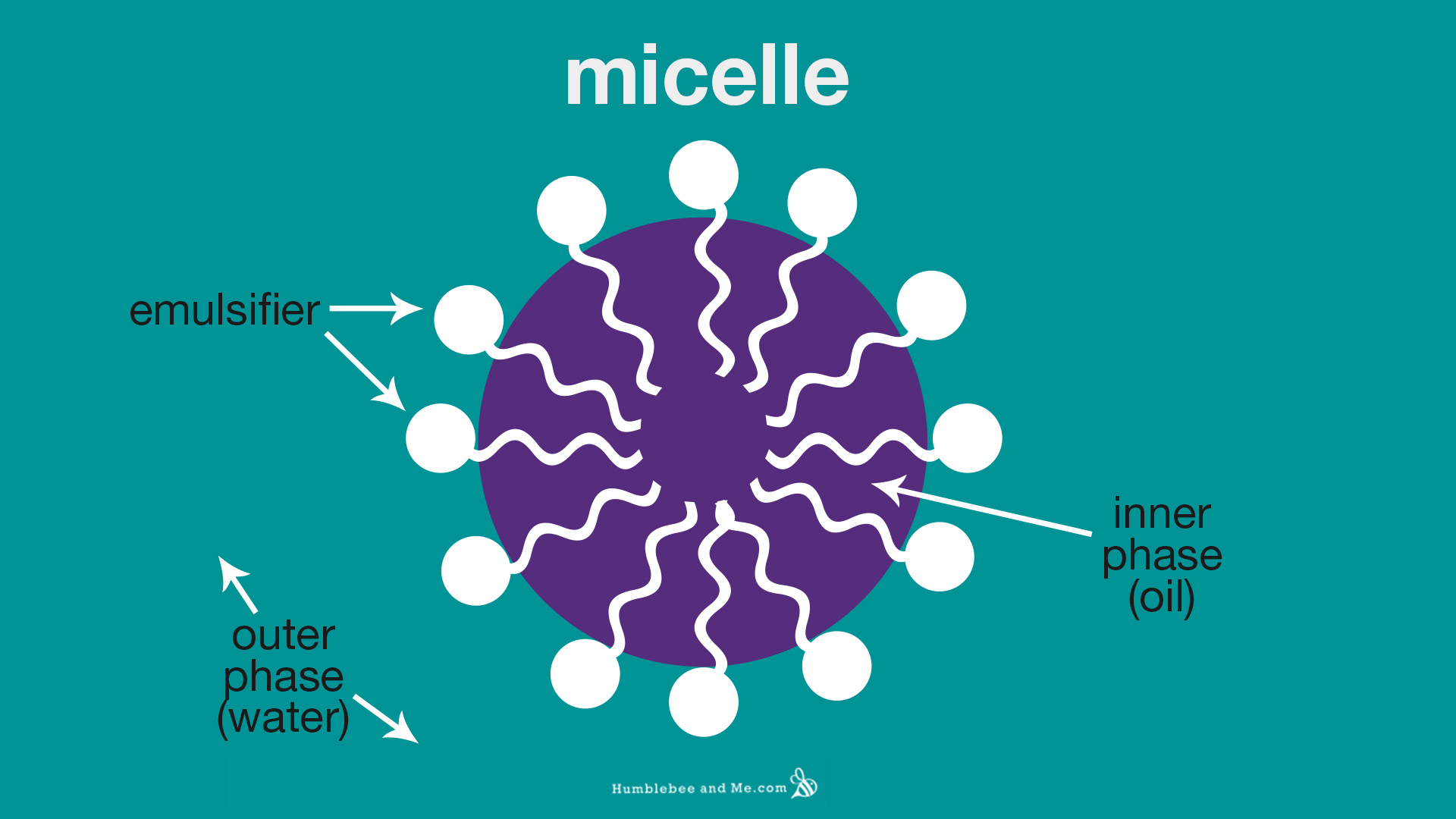 The type of emulsion you’ll get (which part is the inner phase and which is the outer) is entirely determined by the emulsifier you are using. Changing up phase sizes or pouring orders can impact your formulations, but it cannot change an O/W emulsion into a W/O formulation (or vice versa).

Read more: Skin Chakra has a great detailed post on this! 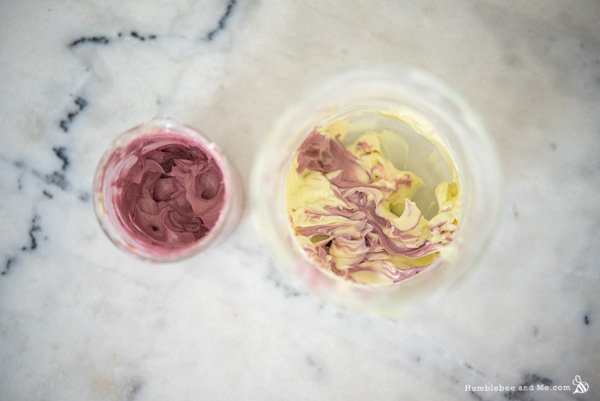 If you’re making an oil-in-water emulsion, you have to pour the oil phase into the water phase (and vice versa).

Specific emulsifiers can definitely have specific requirements about which phase is poured into which, but you can’t determine this by the sort of emulsion you’re making. You’ll have to learn about each emulsifier you work with individually; it’s not enough to note what sort of emulsion it makes and assume that o/w = oil must be poured into water.

In my experience, for many of the emulsifiers I work with, which phase is poured into which doesn’t matter. When working with Emulsifying Wax NF, Olivem1000, Polawax, BTMS-25, BTMS-50, Ritamulse SCG, Glyceryl Stearate SE, and Glyceryl Stearate (and) PEG-100 Stearate (all oil-in-water emulsifiers) I usually pour the water phase into the oil phase, and that has never caused any stability issues in 10+ years and hundreds of emulsions. I’ve also found instructions in supplier/manufacturer formulations that do it either way—some add oil to water, some add water to oil.

I’ve found it definitely matters when working with Sucragel and beeswax/borax emulsions.

Learn more: Check out this great post on the differences between W/O and O/W emulsions! 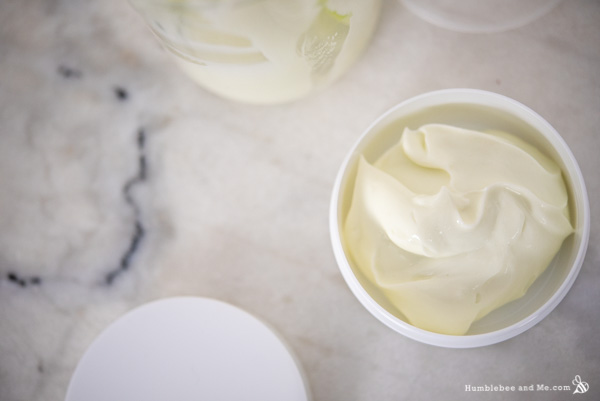 You have to heat & hold.

Heating and holding is the process of heating both phases in an emulsion to 70°C (158°F) and then holding them at that temperature for twenty minutes before proceeding with your emulsion. Of course, this is irrelevant if you’re using a cold-process emulsifier.

Heat & hold is something I’ve never done (intentionally, at least!), and I’ve made a lot of successful emulsions. In my experience, heating until the phases are the same temperature and the ingredients in the heated oil phase have melted is sufficient; this is generally what is called for in supplier/manufacturer formulations as well. The instructions emulsions are usually something like “combine and heat phase A to 75-80°C; combine heat phase B to 75–80°C; combine A and B and homogenize/mix.”

Sometimes I need to give the heated oil phase a bit of a heating boost if something won’t melt (it’s usually a cationic emulsifier like BTMS-50), and as long as the heated water phase is hot enough that the oil phase doesn’t seize up and re-solidify when the water phase is added, things usually work out just fine.

Read more: 6 Reasons why the Heat and Hold Method is a Myth 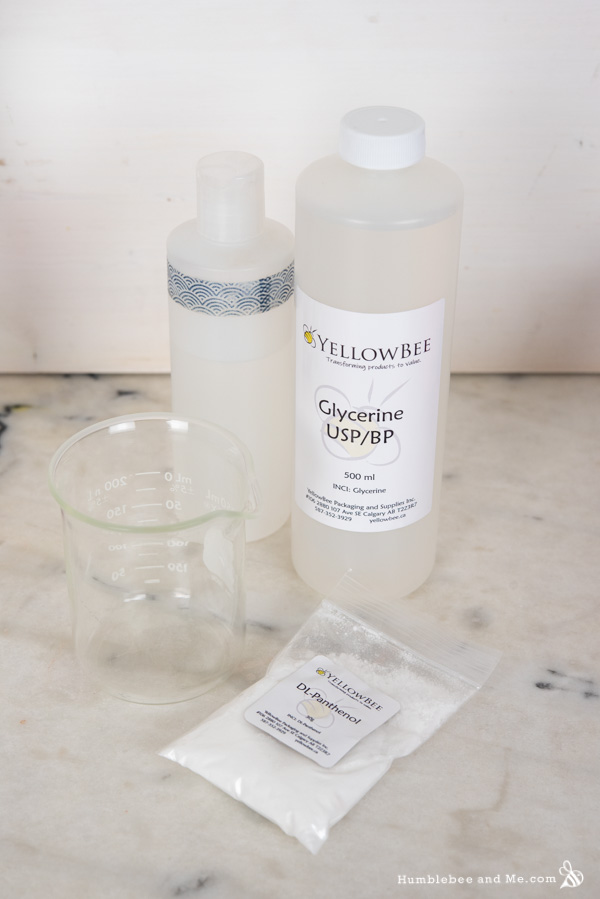 Glycerin is insanely sticky and more than X% makes a product unusable.

Perceptions of stickiness is a highly personal thing, so I really encourage you to try it and see what you think! After years of assuming anything with more than about 5% glycerin would be insanely tacky I tried a La Roche Posay product that boasted 30% glycerin in the label and loved it. I tried making my own version and I loved that, too! It’s not for everyone, but I’ve received a lot of good feedback on that formulation, so I’m not totally alone in a love of vegetable glycerin 😄 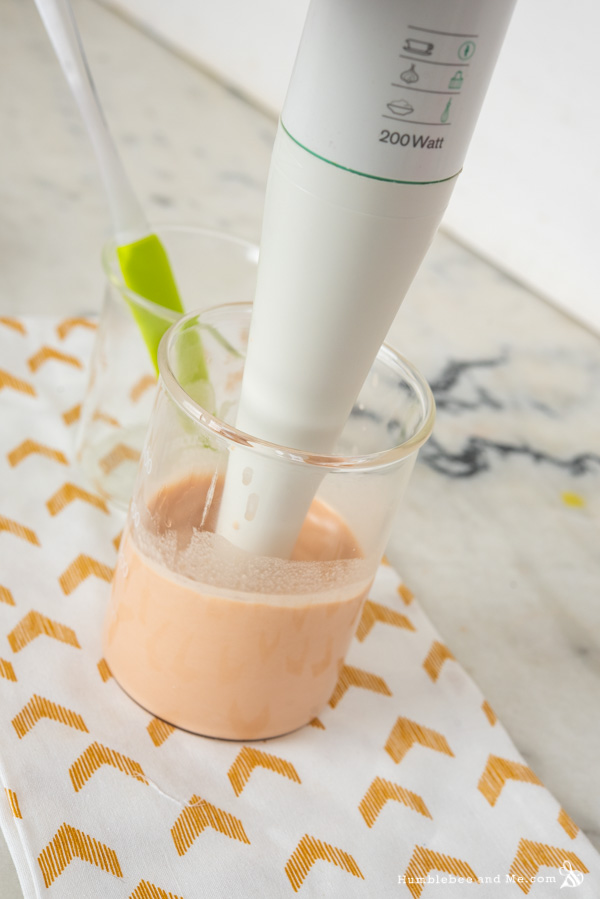 You have to use a high powered/high-shear blender to mix the phases.

Sometimes you do, but not all formulations need an immersion blender or homogenizer to be successful. Some formulations need high shear blending, some won’t fail without it but will benefit from it, and some will be just fine without it. It depends! I generally prefer to use an immersion blender when I’m making emulsions, but if you are just getting started and don’t have one yet, don’t feel like you can’t make emulsions.

As a formulator, it’s a good idea to get to know what will challenge an emulsion and what will help one along. Higher shear mixing usually helps an emulsion, so if you are working with a formulation that contains a few challenging elements, like a high electrolyte load or very thin viscosity, you may need that high shear mixing when you wouldn’t for a viscous, low electrolyte content emulsion.

As always, it comes down to researching your ingredients; read sample formulations from suppliers and manufacturers and see what they recommend. Up next, try it! You might be pleasantly surprised… and you might end up throwing some things away.

Check it out: Lise wrote an entire book about hand-stirred emulsions! 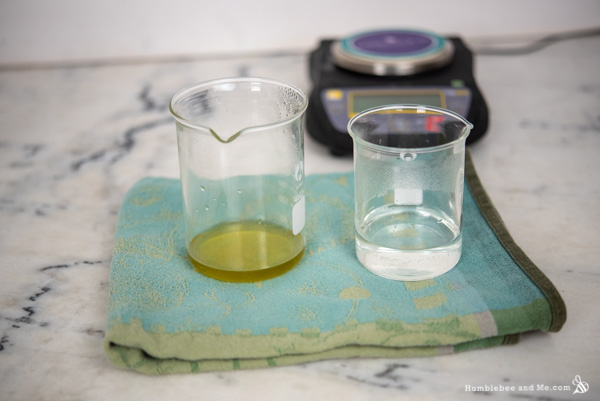 You have to heat the phases separately.

This is another “sometimes, but not always” situation. I have made many successful emulsions using common emulsifying waxes by just heating everything up in the same beaker (or even a saucepan over low heat) and whisking until cool. I’ve even found formulations from suppliers that do this! This Olivem 1000 formulation from Hallstar is basically just cold Olivem 1000 added to hot water, stirred, and then homogenized.

This won’t work with every emulsifier, and if something in your oil phase has a melting above (or even just close to) the boiling point of water, you’ll need to split out the phases in order to heat that ingredient enough to melt.

Research your ingredients, read sample formulations, and try it!

Ok, those have been six lotion making myths I think you should ditch! Can you think of any?