Today’s Super Simple formulation is the most super-ly simple of the super simple formulations I’ve shared with just two ingredients! I’ve also shared two different variations and discussed how to customize it to make it as accessible as possible (and also to hopefully get you inspired to start formulating your own cleansing oils!). Let’s get started! 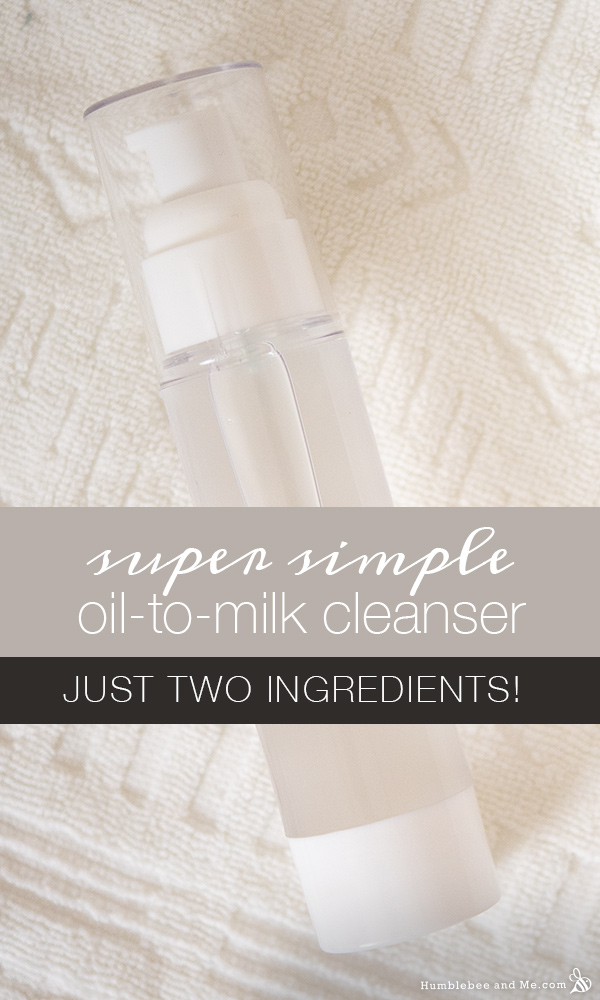 What is an oil-to-milk cleanser/cleansing oil?

I think an oil-to-milk cleanser (or cleansing oil) is the simplest cleanser you can make. It’s basically just inexpensive oil (and/or oil-soluble esters) with just enough of a surfactant to allow the product to self-emulsify with water, making for easy and clean rinse-off. It is perfectly possible to make a cleansing oil with just two ingredients, but most products you’ll find on the market are more complex than that.

The oil base of the formulation is important because like dissolves like, so the oil in the cleanser dissolves the sebum on our skin and breaks down the film-formers that make products like makeup and sunscreen long-wearing. We then add an oil-soluble surfactant to the formulation so the oil (now mixed with excess sebum and eyeliner) rinses off easily, leaving the skin feeling clean. 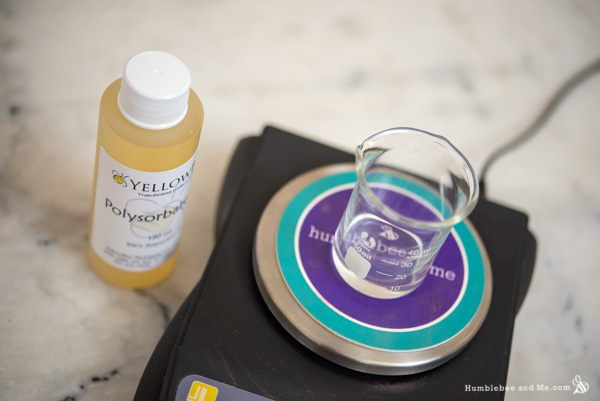 One of the biggest principles of ingredient selection for a cleanser is that the bulk of the ingredients should be inexpensive (or if they are expensive, stick to a low usage rate). Since cleansers are only in contact with the skin for perhaps a minute before being rinsed down the drain, including high concentrations of expensive ingredients is rather wasteful; I prefer to save my fancy ingredients for leave-on formulations. 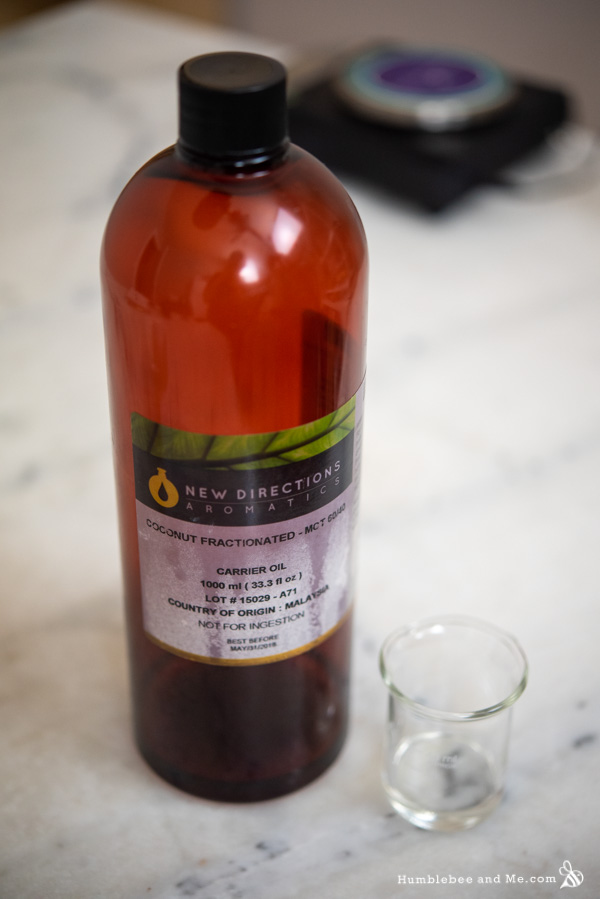 I love to include around 10% castor oil in my cleansing oil formulations—it’s a hold-over from my days trying the OCM, and I find it boosts cleansing and leaves my skin feeling lovely. I haven’t included it here in the interests of super-simple-ness, but you could easily swap out 10% of the fractionated coconut oil for castor oil if you have it.

If you’d like to include a more expensive oil for label appeal you can easily swap 5%–10% of the fractionated coconut oil for a fancy oil. You could also take some inspiration from many commercial cleansing oils that use lots of ultralight esters for glorious skin feel (cetyl ethylhexanoate pops up in a lot of ingredient lists). C12-15 alkyl benzoate and isopropyl myristate (IPM) are two of my favourite esters to include in cleansing oil formulations.

How much should you use? Enough to make the formulation total 100% after you’ve selected all the other ingredients. 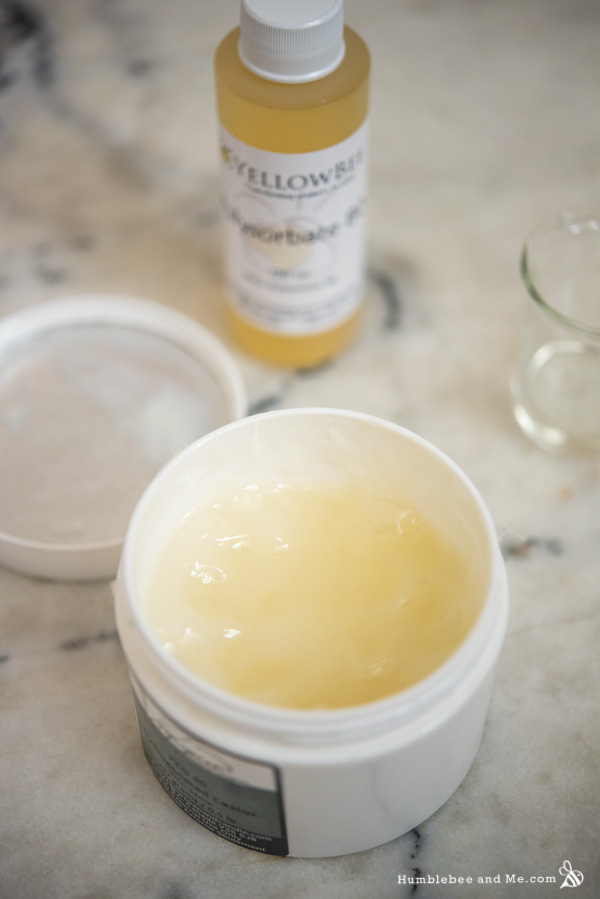 This is the ingredient (or ingredients—many commercial oil cleansers use more than one emulsifier) that makes the formulation oil-to-milk instead of just oil—it’s the ingredient that allows water to blend right into the cleanser and get all milky and lovely, making for beautiful rinse-off.

The two options I’ve presented today are polysorbate 80 and PEG-40 hydrogenated castor oil, but those definitely aren’t the only options when formulating a cleansing oil! If you can get Cromollient SCE (Di-PPG-2 Myreth-10 Adipate), that’s really quite lovely. Other options I’ve seen in commercial products and sample formulations include PEG-20 Glyceryl Triisostearate, PEG-40 Sorbitan Peroleate, polyglyceryl-4 oleate (and many other polyglyeryl emulsifiers like Polyglyceryl-10 Dioleate, Polyglyceryl-6 Dicaprate, and Polyglyceryl-2 Oleate), PEG-8 Isostearate, PEG-12 Diisostearate, sorbeth-30 tetraoleate, and many more. If you’re looking at an ingredient list and you aren’t sure which ingredient is the emuslfier, start by researching the ingredients that have numbers in their names. You’ll likely have access to a few different options—what those options are will vary with where you live and where you shop.

You can’t use a water-containing surfactant in a cleansing oil formulation, which means surfactants like Coco Glucoside, Sodium (C14-16) alpha olefin sulfonate (Bio-Terge AS40), or Cocamidopropyl Betaine won’t work. I also don’t recommend using a solid surfactant like Sodium Cocoyl Isethionate (SCI) or Sodium Lauryl Sulfoacetate (SLSa)—they won’t dissolve in the oily base and they’ll just settle out of the formulation.

How much should you use? This varies with the emulsifier and with how strong you want your cleanser to be. I recommend looking for sample formulations for oil cleansers that use the emulsifier you’re formulating with, see what they use, and start there. If that’s too strong, use less. If it’s not cleansing enough, use more. If you can’t find any sample formulations, look at the recommended usage rate from your supplier, and start with around 5% (assuming that’s within the recommended usage rate). 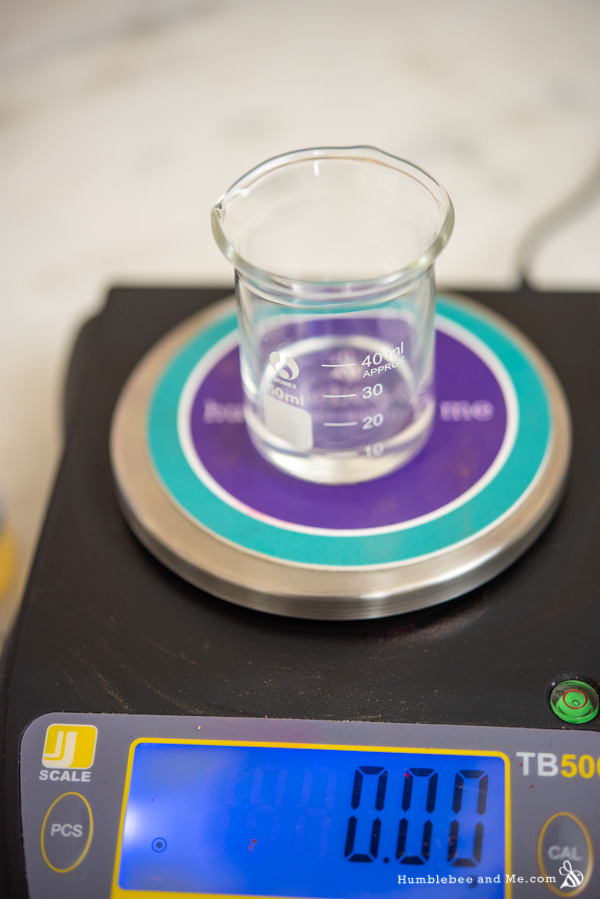 It’s a good idea to include a small percentage (~0.5%) of an antioxidant to extend the shelf life of your oils, though if I’m making a small batch (100g [3.5oz] or less) that is primarily comprised of really shelf-stable oils/esters (like fractionated coconut oil, isopropyl myristate, or C12-15 alkyl benzoate) I’ll sometimes skip the antioxidant as I know I’ll finish the cleansing oil ages before it could oxidize.

A small amount (1% or less) of an essential oil and/or fragrance oil will add some scent to your product. I usually skip any sort of fragrance if I’m planning on using the cleansing oil to remove eye makeup. Whatever you use, make sure it’s safe to use on the face at whatever percentage you’re planning on using it at.

Oil-soluble extracts and other oil-soluble goodies

I’d keep usage rates low with ingredients like this; you can definitely include them, but they won’t have much of an opportunity to work on the skin in the mere moments they’re on your face before getting rinsed down the drain. I prefer to save these ingredients for leave-on formulations. 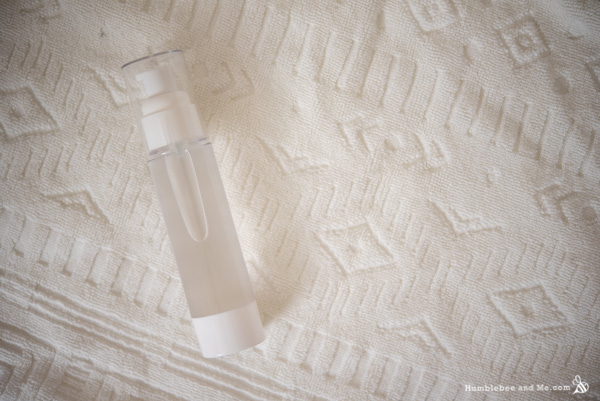 Does an oil cleanser need a preservative?

Because oil cleansers don’t contain water, they don’t need a broad-spectrum preservative. That said, it is important not to contaminate your oil cleanser with water during use, so make sure you choose a package/bottle that makes it easy to keep your product nice and dry.

Which version should I make? 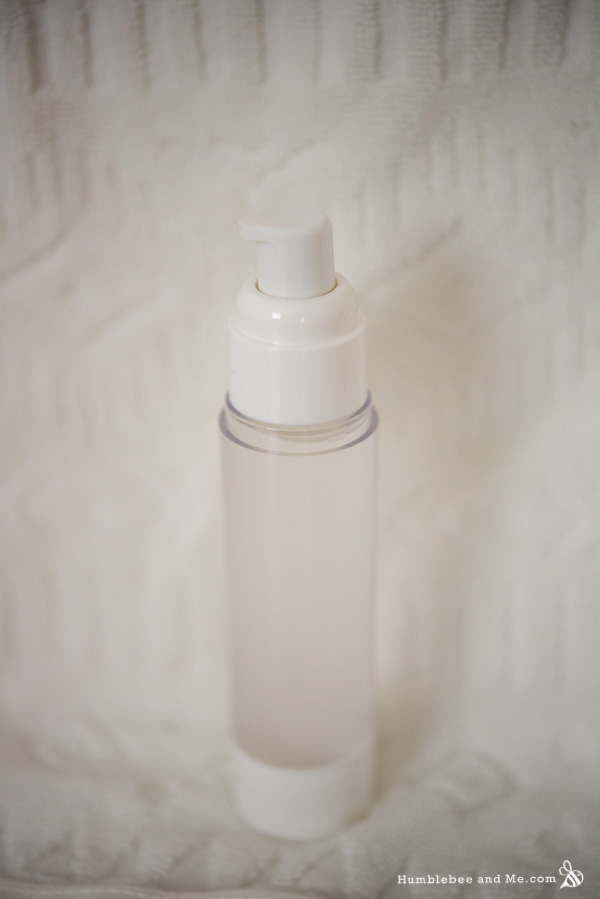 You’ll want to package a cleansing oil in some sort of bottle with a cap that will reduce the flow of the liquid cleansing oil so you don’t end up with a huge sloshy palmful of product—after that, the only limit is your imagination! I’ve used bottles with disc caps, turret caps, flip-top caps, and cone caps. You could also just put an orifice reducer in the bottle and use a plain ol’ screw-on cap. Hylamide sells their cleansing oil in a bottle with a cap I associate with white glue, which is neat. If you want a pump top I’d recommend a treatment pump as they handle lower viscosity liquids better than a standard pump; you can also get airless pump bottles with treatment pump caps.

Whatever you choose, make sure the oil won’t easily spill when the bottle is opened, and make sure it would be next to impossible to get water into the bottle as you use the cleansing oil.

Weigh all the ingredients into a small beaker, or directly into the bottle you’ll be storing the serum in.

If you used beaker, stir to combine. If you went straight for the bottle, cap and shake.

To use, massage a dime-sized amount of the cleanser into dry skin and remove with a damp microfibre cloth.

Because this cleansing oil is 100% oil-based, it does not require a broad-spectrum preservative (broad spectrum preservatives ward off microbial growth, and microbes require water to live—no water, no microbes!). Kept reasonably cool and dry, it should last at least a year before any of the oils go rancid. If you notice it starts to smell like old nuts or crayons, that’s a sign that the oils have begun to oxidize; chuck it out and make a fresh batch if that happens. 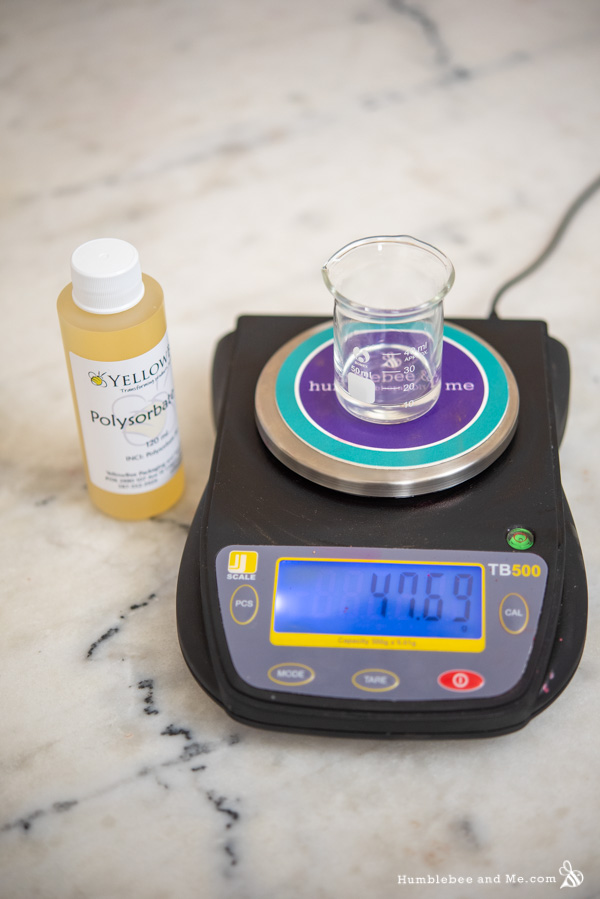