Welcome to our first project of the holiday 2020 making season—Vegan Cocoa Coconut Nanaimo Bar Soap! These decadent bars of soap are part of our cocoa/coconut theme (I announced both themes on YouTube last weekend—check out the video here!), and channel my favourite cocoa/coconut dessert—the downright delicious Nanaimo bar. They smell wonderfully of chocolate and make a brilliant gift… as long as your recipients know not to eat them, at least! 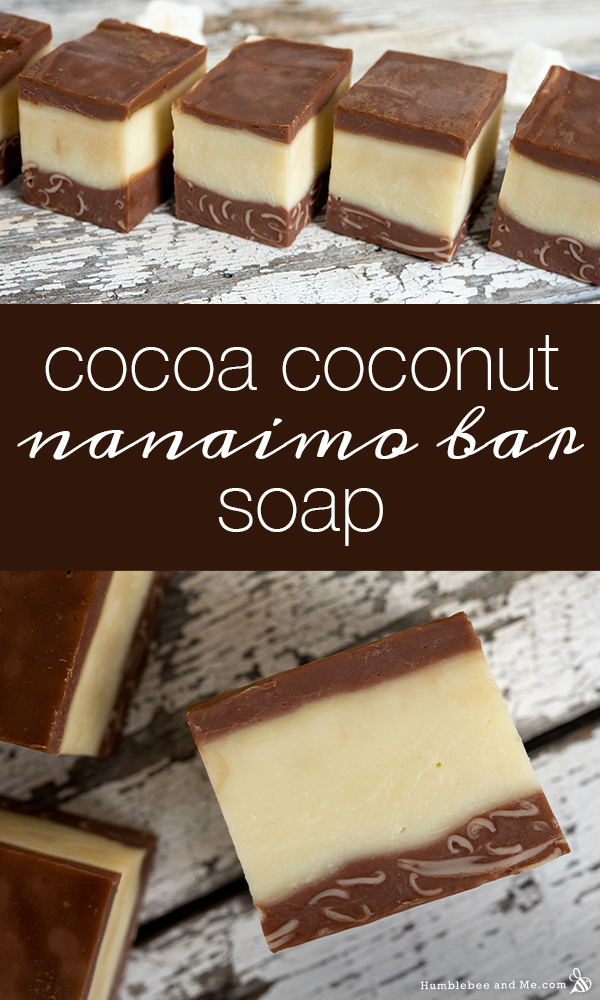 If you’ve never had a Nanaimo bar before, you are seriously missing out. They make appearances on dessert trays and buffet tables all year but are especially common at Christmas time. They’re a three-layer bar, with a base of graham cracker crumbs, cocoa, shredded coconuts, and ground pecans; a center of vanilla custard; and a layer of chocolate on top. They are rich, decadent, and one of my favourite Canadian foods (along with poutine, but I’m not sure how appealing poutine soap would be…). 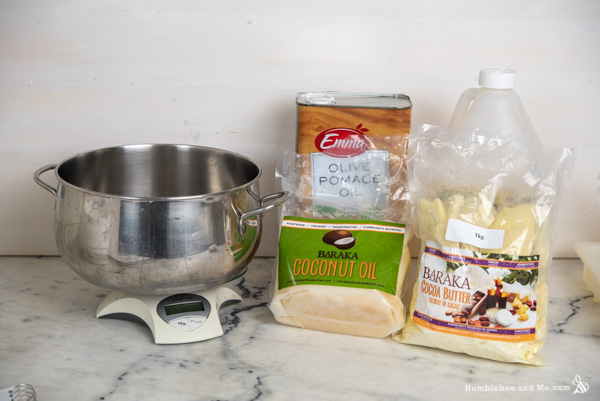 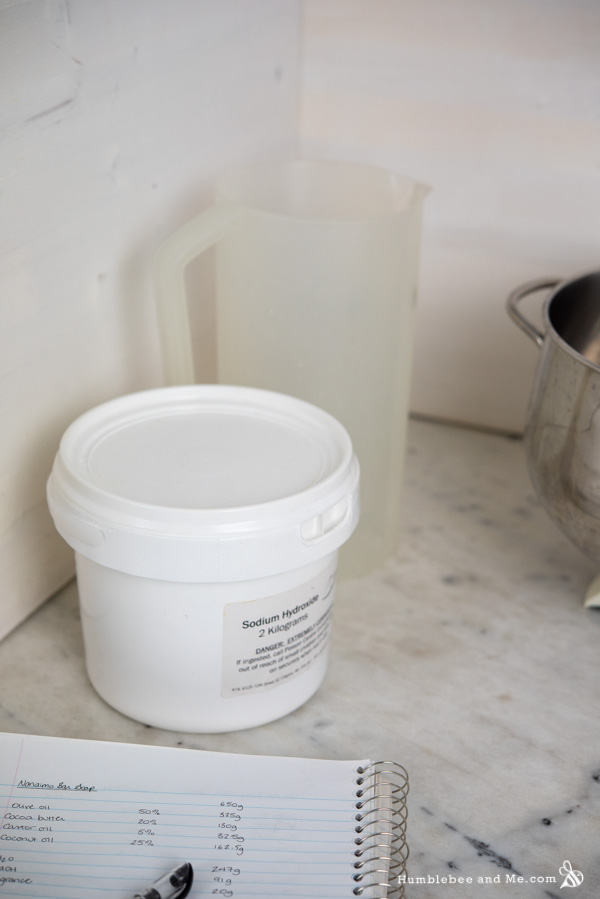 The Nanaimo bar-y tribute starts right with the fat blend—a vegan mixture starring mouthwatering cocoa butter and virgin coconut oil, both from Baraka Shea Butter (which is headquartered about an hour’s drive from the home of the Nanaimo bar!). I usually use beef tallow as my hard fat when making soap, but for these bars, a generous whack of brittle cocoa butter is doing that job. 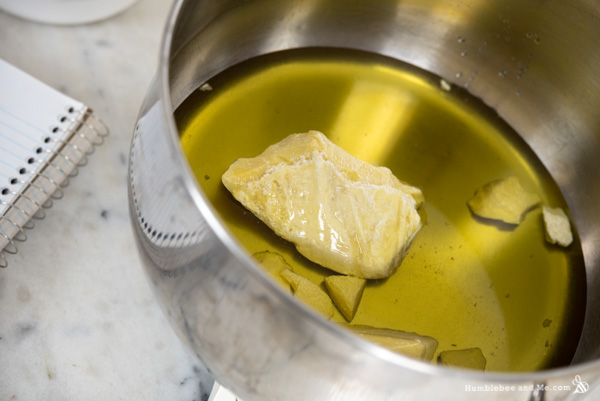 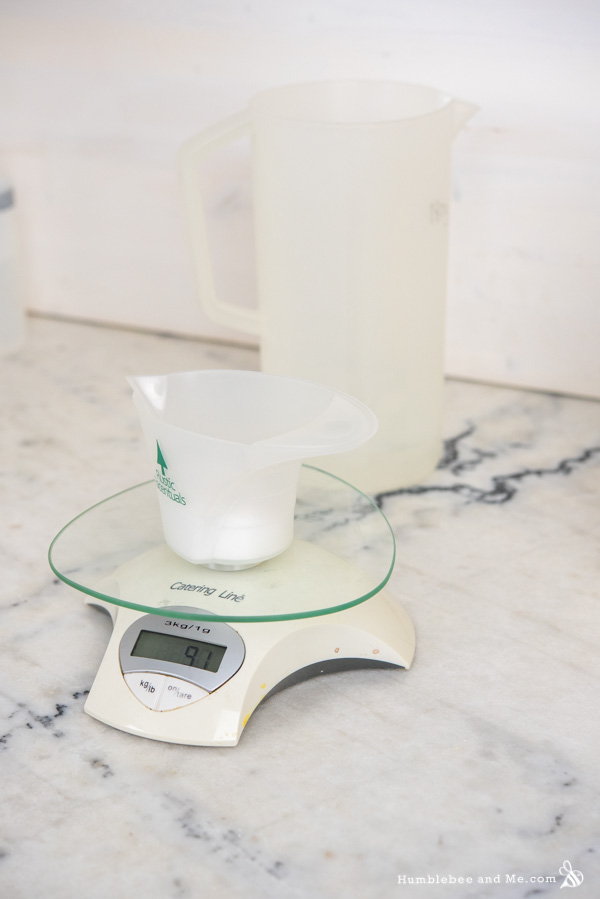 To mimic Nanaimo aesthetically, bars I’ve split the batter into two parts; 60% creamy off-white (for the custard) and 40% chocolate dark brown (for the base/crust and the chocolate topping). I used Brambleberry’s Chocolate Ganache fragrance oil, but only put it in the dark brown parts of the batter as Brambleberry notes it will cause soap to discolour brown… but it can’t discolour brown if it is already brown! 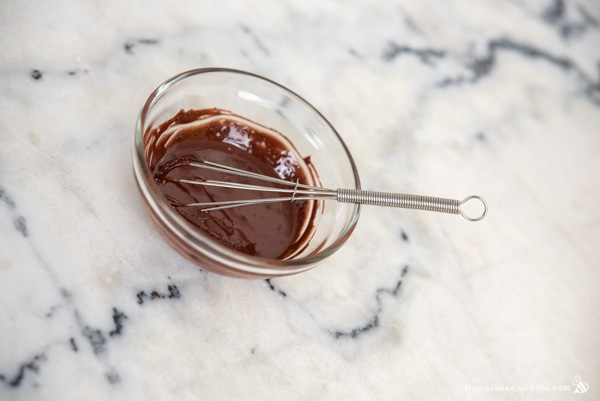 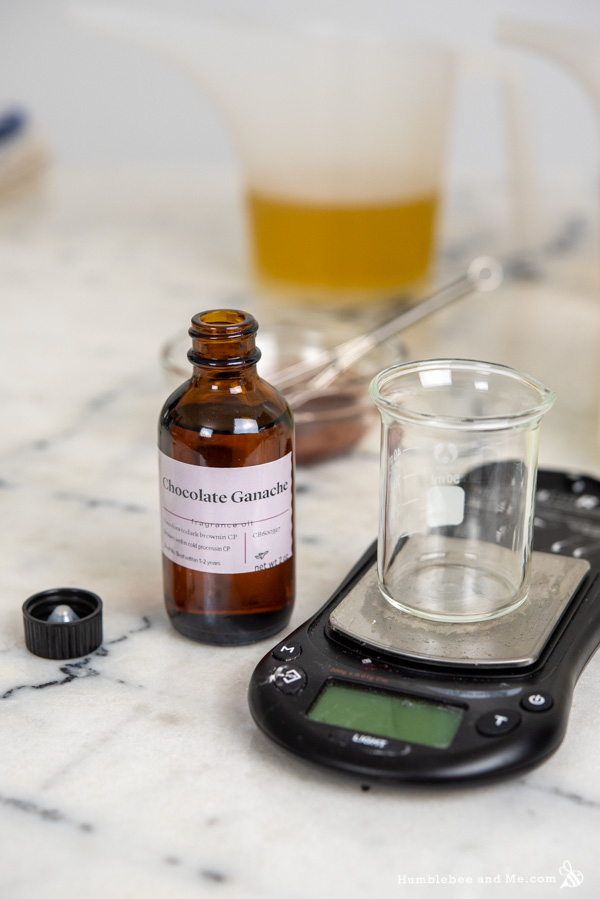 Instead of using coconut in the base/crust (I’ve tried it in the past and hoooo boy is that an aggressive exfoliant!), I used some shredded white soap. To keep things easy I used a brick of white soap base from Brambleberry, but you could very easily make your own batch of white soap and use that—that’ll just take longer as you’ll need to let that soap age at least a little bit before shredding it. This could also be a good place to use a pre-made white soap you already have on hand, just make sure its scent will cooperate with the cocoa/coconut theme. 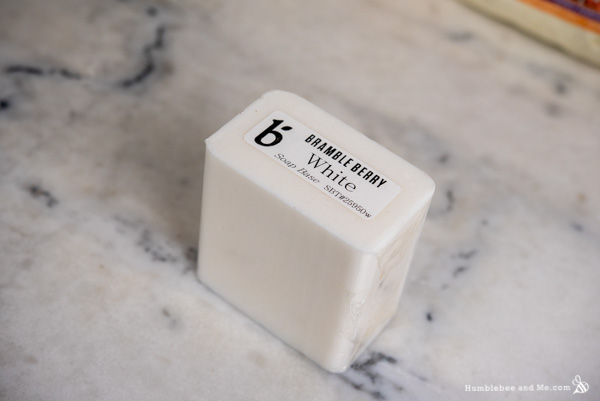 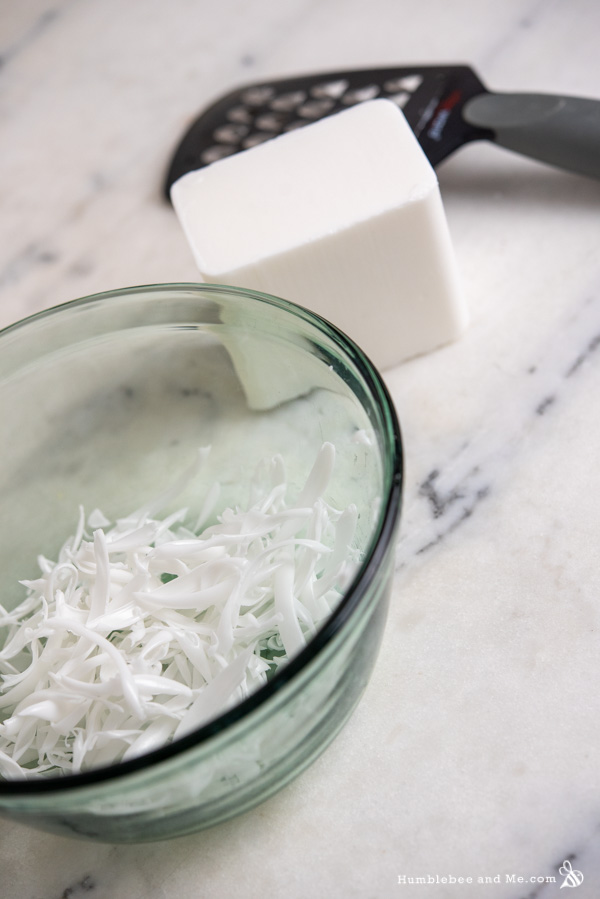 Nanaimo bars are usually made in an 8×8″ pan and sliced into 1–2″ squares, so I used a shallow square mould for these bars for a similar look. For the strongest Nanaimo-bar-y appearance, I recommend doing something similar—Nanaimo bars aren’t round, and they aren’t loaf shaped (though goodness… there are days when I would love a full loaf-sized slice of Nanaimo bar…). 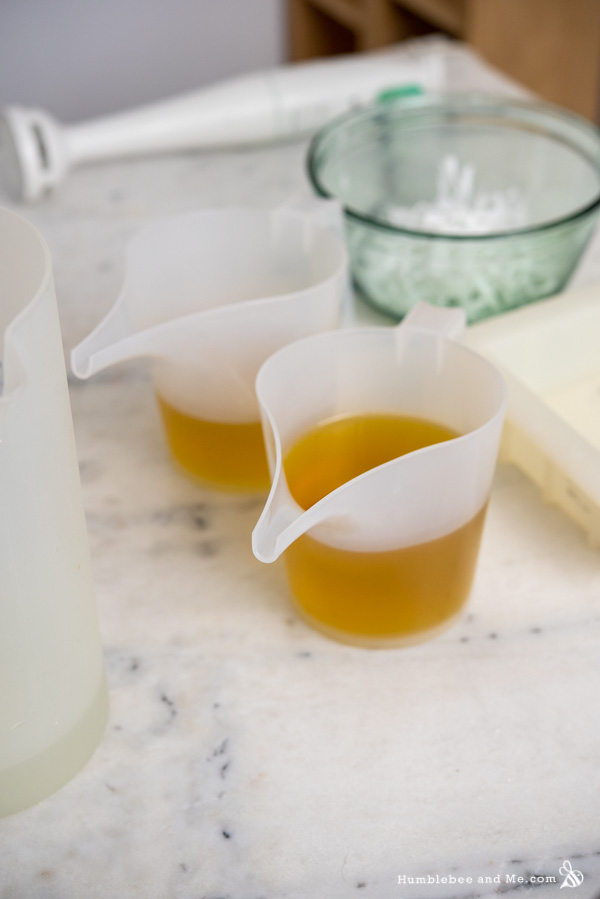 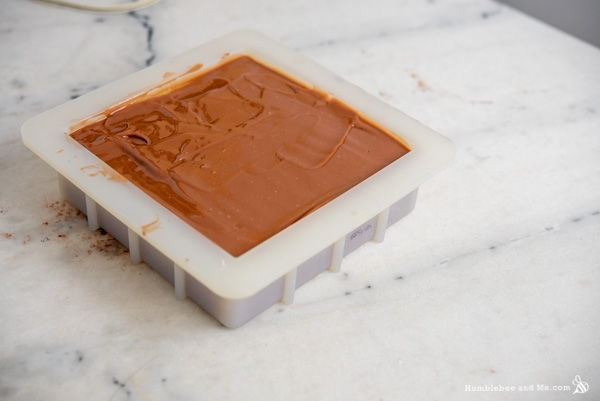 The finished bars are downright delectable. They bear a striking resemblance to the edible version, though they’re certainly a bit more structurally sound since the middle layer isn’t actually soft custard. If you’re already a Nanaimo bar fan, I hope you enjoy this sudsy tribute—and if you’re not a fan yet, I hope you make a batch while this soap is saponifying. Happy making!

Calculate to 5% superfat with water at 38% of oil weight

Kick things off by calculating out your recipe for the amount of soap you’re making to get the finite amounts of the fats, lye, and water. Unsure about how to use SoapCalc? I made a video to walk you through it! Please ensure you’re familiar with standard soap making procedure before diving in (click that link if you aren’t!).

Prepare your mould—you’ll want a flat, shallow square or rectangular mould for this soap—something similar to an 8×8″ or 9×13″ baking pan. Melt your oils together in your soaping pot. Let your oils cool to slightly warmer than room temperature. Mix up your lye water and let that cool to about room temperature (you can use ice for part of your water to speed up the cooling process).

You’ll also want to ensure all of your other ingredients are ready so you aren’t left scrambling and don’t potentially end up with too thick of a trace. Arrange your work area so you can easily grab your fragrance, shredded soap, and pre-dispersed brown iron oxide. Prepare your mould by lining it (if required).

We’ll start with the custard part. Pour 60% (by weight!) of your lye solution and fats into the container holding 60% fats and bring that mixture to a very thin trace. Set it aside.

Pour the remaining 40% of the lye solution into the 40% of the fats, and bring that mixture to a thin trace. Add the fragrance oil and just enough brown iron oxide to make the mixture chocolate-coloured. Pour about 20% of the chocolate batter into another container with a pouring spout.

Now it’s time to get the soap into the mould; you’ll want to work reasonably quickly.

Stir the shredded soap into the larger portion of the chocolate batter, and pour/spread that over the bottom or the mould. Top that with the “custard”, breaking its fall with your spatula so it doesn’t dent the chocolate/coconut layer too much. Finish off with the reserved chocolate, spreading that evenly across the top of the soap. Knock the mould on the counter a few times to settle things out and knock out any air bubbles, and then leave the soap to saponify for 24 hours.

About one hour before slicing, pop the soap in the freezer to make removing it from the mould easier. Removing the soap from the mould and slice it into dessert bar sized bars. Place the soap somewhere cool and dry to age for at least three to four weeks before using or gifting. Enjoy! 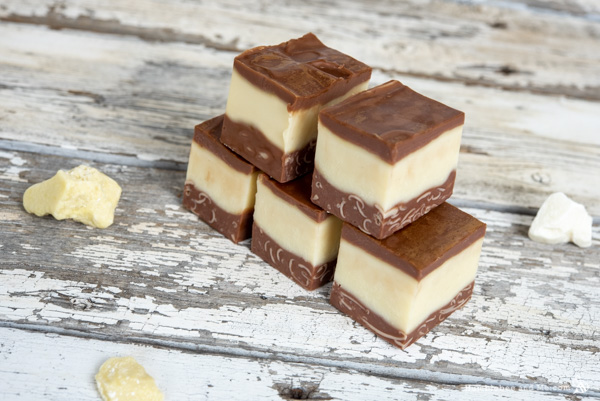