Why You Should Give the Metric System a Chance: Part 2

The naming in the metric system is all predictable prefixes and suffixes. That might sound intimidatingly scientific, but I promise it is actually way easier than the Imperial way! It’s sort of like those funny flip books where you could match different heads with different bodies and legs to make cool characters. 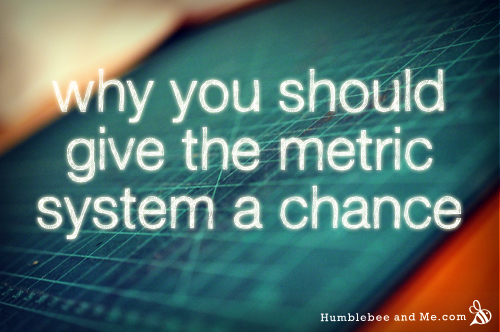 So, with those three little words you can now know what types of units of measurements a millilitre, a centimetre, and a kilogram are, even if you’ve never heard of them before (there are waaaaaay more suffixes than this, but these are the ones that matter with most of my DIYing stuff). You can’t say that for a foot, an ounce, or a mile.

For each of these units, we have a base amount of it—that is, one litre, one meter, and one gram. One litre is about ¼ of a gallon, or two pints. One meter is approximately one yard, and one gram is approximately 1/28th of an ounce. And, one gram of water is equal to one cubic millilitre of water (which is pretty handy if you want to know how much 1L of water weights. Hint: It’s 1kg.) 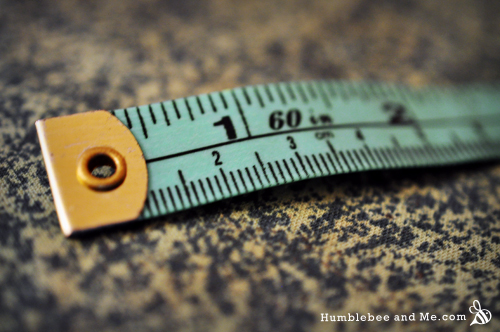 The prefixes indicate how many of that base amount you’re working with—one, ten, one hundred, one thousand, and so on (and also down into percentages, like one-tenth, one one-hundredth, and so on). These are always in multiples of 10 (yay!). As with the suffixes, there are oodles of prefixes, but we’re really only concerned with about half a dozen of them. You’ll likely recognize kilo, mega, and giga from their pairing with -byte (kilobyte, megabyte, gigabyte, and even terabyte). 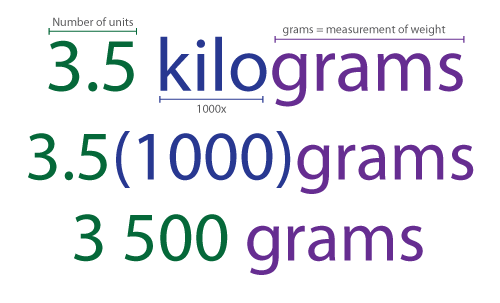 There’s a lot more to know if you’re curious, but unless you are working in a lab you likely won’t need much more than this. Wikipedia has a great article if you’re interested!

So… does that help? Do you think you’ll give the metric system a chance?