Today we’re creating some striking bath bombs to celebrate the winter solstice (technically the solstice was the night of the 21st, but here in Calgary the 23rd is only 8 seconds longer than the 21st, so I think we can still call it solstice season!). A cool, purpley base shimmers like the night sky with accents of colour-shifting biodegradable glitter. Once in the bath, these sparkly tub treats fizz away, turning your bath water purple with dancing whorls of glitter. Pair with a mug of hot tea and a good book for a perfect winter night!

My bath-bomb-making has definitely evolved over the years. If we go back and look at the first-ever bath bombs I shared on Humblebee & Me, they were ok. They fizzed when dropped into a tub, and that had me pretty stoked back in 2011. I slowly tweaked and improved my formulation and process until I decided I wanted to make hand-moulded spherical bath bombs. That threw a wrench in things because it turns out spherical bath bombs are much more finicky—the mix + technique has to be just right or they won’t mould properly. So, I spent a couple of days making dozens and dozens of bath bombs before I felt I had that more or less sorted, and I’ve been carrying on from there ever since. I’d had a chat with Michele at Windy Point about her experience with presses and bath bombs that had me thinking there’d be another learning curve when I graduated to a press… and I was right. 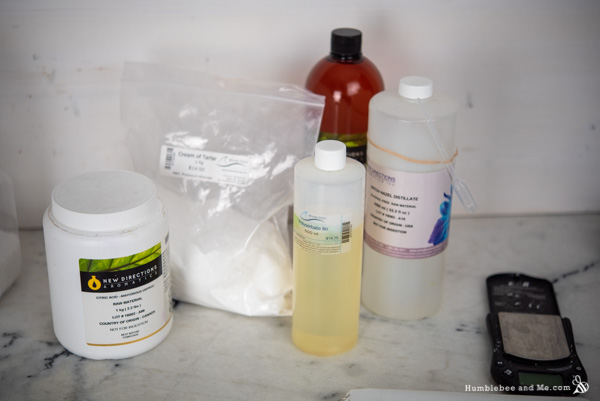 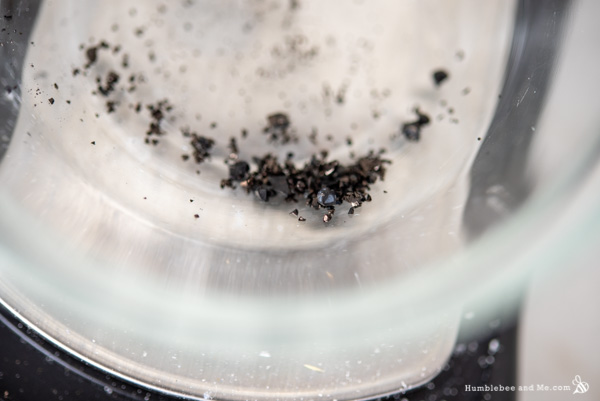 When I first set to making bath bombs with my press I tried a batch the way I’ve made bath bombs in the past—mixing up the dry ingredients, blending in the oils, and then gradually misting in just enough witch hazel and 70% isopropyl alcohol to mould the bath bombs without them reacting prematurely. It worked decently enough, but it clearly wasn’t ideal. It just wasn’t as streamlined as I felt this sort of thing could (and should) be—so I turned to YouTube and binged on Ariane’s bath bomb making videos. I learned a few things from watching her work her magic. Thing #1: she adds the wet things to the baking soda and gets that all blended in before adding the acidic ingredients—meaning there’s no chance of the mixture reacting because only half of the reaction is present. Amazing. No more frantic mixing and misting! Thing #2: the mould is typically packed a lot more before pressing than I would if doing a hand-moulded sphere. Thing #3: The bath bombs are pretty dang sturdy (when done right) when they come out of the mould. Thanks, Ariane! 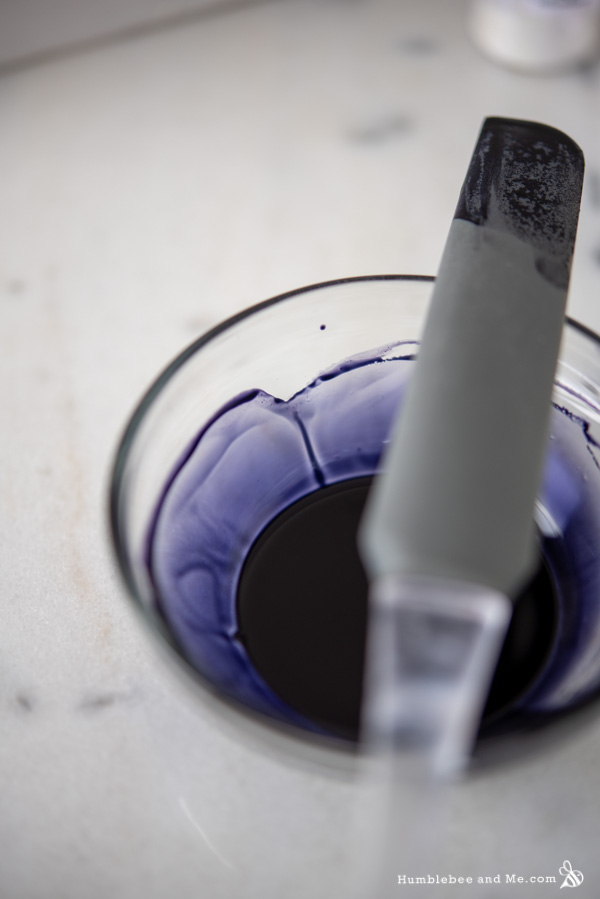 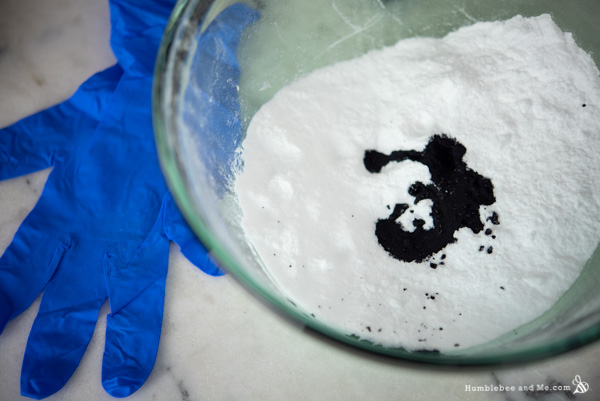 So, I shifted the order I mix things up in and re-worked my formulation to include the witch hazel right from the get-go rather than it being an “as needed” thing in a mister bottle at the end. I’ve found this gives much more predictable results, and using witch hazel instead of a blend of witch hazel and 70% isopropyl alcohol means I don’t typically have to re-wet the mixture while I work (provided I’m only doing about ten bath bombs in one go). It’s also just SO MUCH NICER. The spritzing and mixing aren’t horribly fussy, but still a lot fussier than this new-to-me process is. The cube mould is much more forgiving than the spherical mould for the Bath Bomb Press, so it was a good place to start off my pressed bath bomb learning curve. 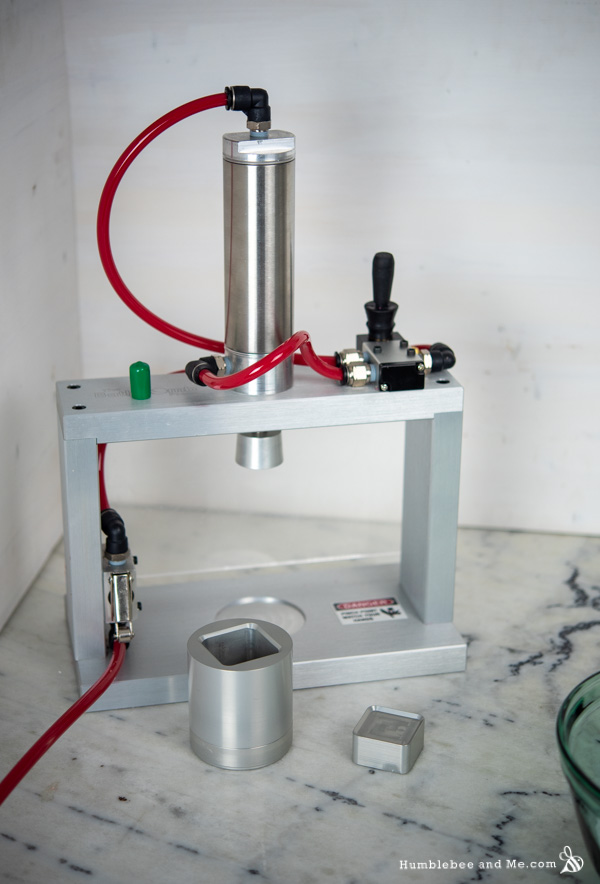 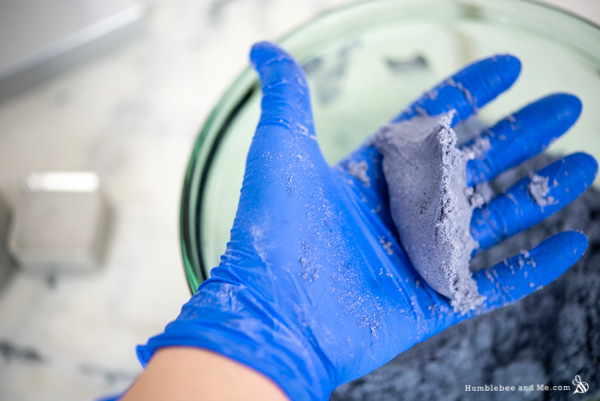 I’m also working with new water-soluble dyes from YellowBee—these beautiful dyes create bath bombs that dye your bath water! I’ve been making lots of things with these stunning dyes all summer/fall/winter long and hoooooo boy are they strong. I made some bar cleansers that leave the side of the tub pink and dye my bath water (that wasn’t my intention, but cool!)—and that was at 0.05%! So, knowing I wanted to make some bath bombs that would transform my bath water into colourful people soup, I started there, and ended up going even lower and still finding the bath bombs dyed the water and were very colourful. These dyes are so dang cool! 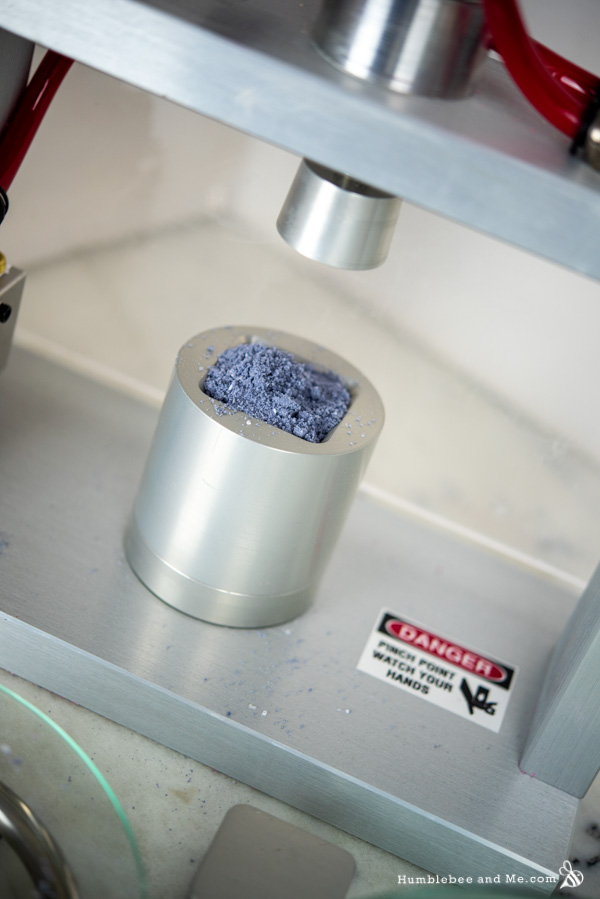 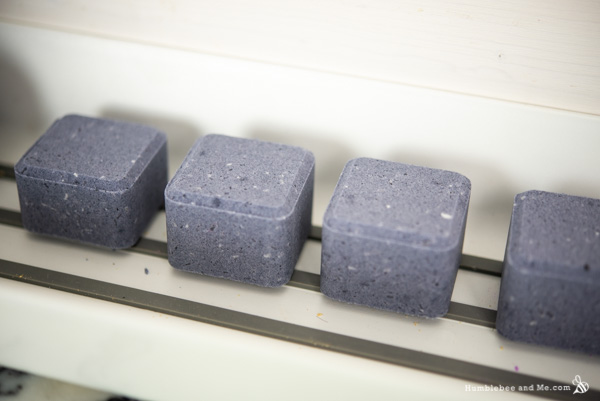 For these bath bombs, I used a dye called Acid Black 2. It is actually a super, super dark cool purple/dusty lavender colour, so at lower concentrations, you get more of a purple than a black. I tried two different concentrations: 0.03% dye gives a dusty purple bath bomb that’ll dye your bath water without leaving a ring. Using 0.2% dye creates a much deeper purpley-black bath bomb that dyes your bath water an even deeper shade of eggplant, but that does leave a ring in the tub (I’ve found even concentrations as low as 0.05% can leave bathtub rings, so it’s not at all surprising that 0.2% does). I’ll leave the concentration choice up to you—if you don’t mind a bit of tub scrubbing and like a darker bath bomb, use more dye. If that’s not your jam, use less dye. Please read the substitutions list for information on how to adjust the formulation for more dye. 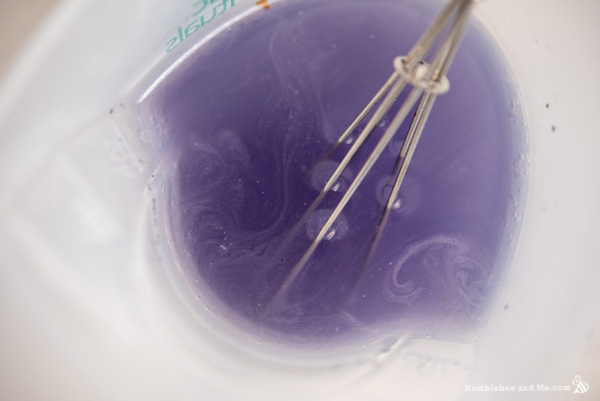 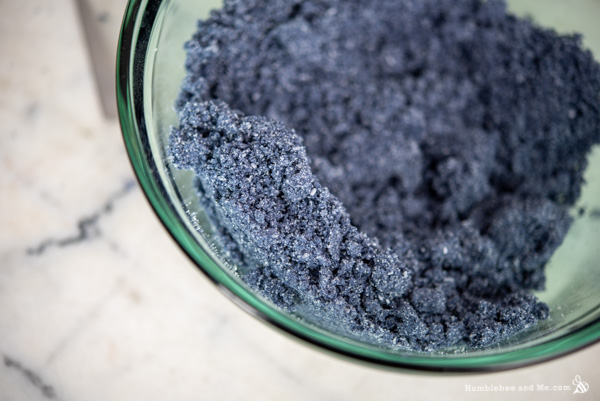 For decoration, I knew I’d need to involve some silvery biodegradable glitter to channel the stars and moon on a dark winter night. I ended up trying two different options, and I love them both! Option one is a glittery mica/glitter drizzle/splatter. It’s abstract and ultra-shimmery once it dries—it almost looks like chrome. Option two is a dusting of glitter on the finished bath bombs for a bit of a “stars in the night sky” look. Both are lovely, so do whichever strikes your fancy! 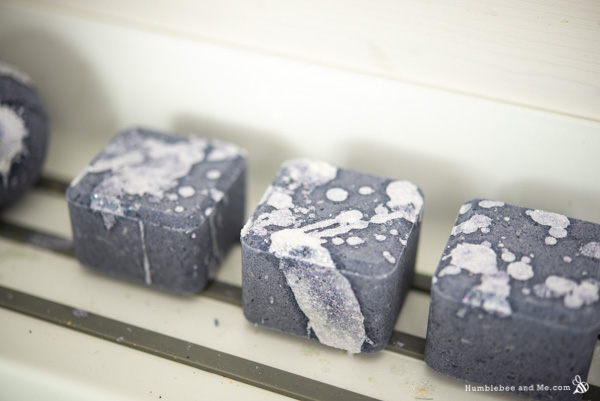 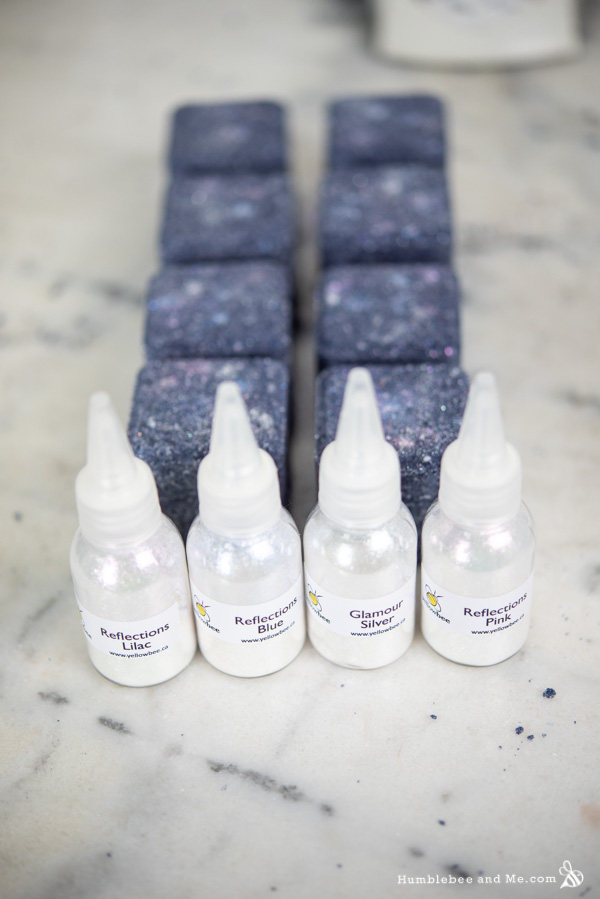 Weigh the witch hazel and dye into a small dish and whisk to combine/bloom.

Weigh the baking soda and Epsom salts into a large bowl. Stir to combine, and then add the dye/witch hazel mixture. Put on a pair of disposable nitrile or latex gloves and blend the mixture thoroughly.

Up next, weigh in the citric acid and cream of tartar, and blend that into the mixture as well. Last up is the Polysorbate 80, apricot kernel oil, and fragrance. Weigh those into the bowl and blend thoroughly with your gloved hands. When you’re done you should have a clumpy mixture that holds together well when squeezed firmly.

Now it’s time to mould the bath bombs! You can hand-mould these, as described in this post/demonstrated in the partner video, but I opted to press these bath bombs with my beautiful new Bath Bomb Press and the 1.75″ cube mould. I set the press to ~45psi and pressed 75g of the mixture for each bath bomb. Be sure to watch the video to see this in action! The mould can hold 100g (3.5oz) of bath bomb mix and I’ve done that, too—it requires a bit more fussing and pre-packing to get it all to fit enough to press it, but the end result is much more cube-like.

Once the bath bombs have been moulded we can decorate them and leave ’em to dry! I played with two different decorating options:

For a drizzle/splatter/chrome effect: Mix up the glitters/micas with enough 99% isopropyl alcohol to make a liquidy slurry, and then use a disposable pipette to suck up some of the shimmery slurry and drizzle/spray it over your bath bombs. I find the glitters tend to settle fairly quickly, so make sure you’re stirring the mixture as needed.

When you’ve thoroughly glittered up the bath bombs to your taste, leave ’em to dry for 12–24 hours before packaging, using, or gifting. Enjoy! 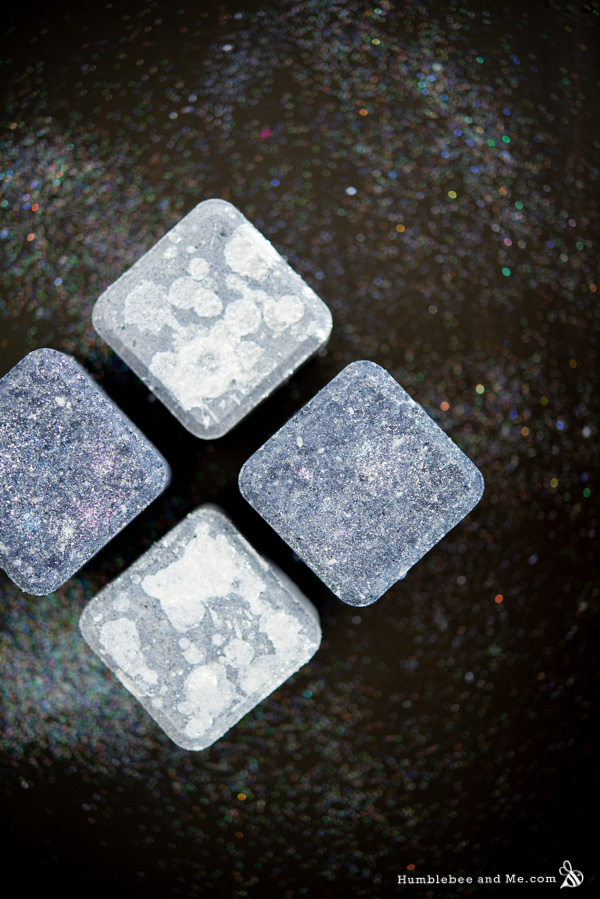 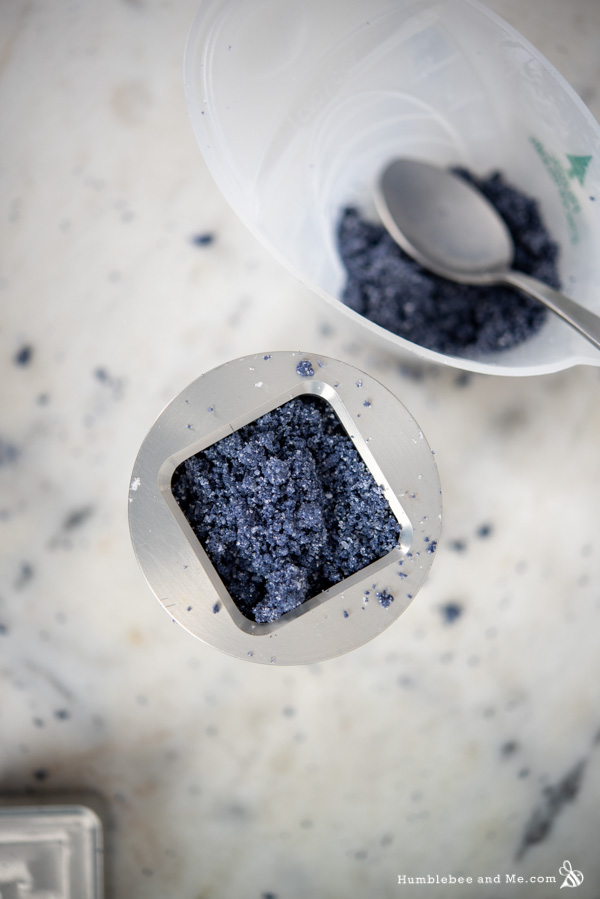